In Florida, about 43% of residents in certified nursing homes have dementia and an additional 30% have some other psychological diagnosis (Harrington & Carrillo, 2018). This means understanding the issues and complexities associated with Alzheimer’s disease and other types of dementia is critical for family, friends, and anyone working in a nursing home, adult day care facility, or hospice, no matter what their education or background.

The exact cause of dementia is still unknown. In Alzheimer’s disease, and likely in other forms of dementia, damage within the brain is thought to be due to the formation of beta-amyloid plaques, the formation of neurofibrillary tangles, and degeneration neurons in the cerebrum. These processes are clearly explained in the following video.

Inside the Brain: Unraveling the Mystery of Alzheimer’s Disease [4:22]

*Post mortem studies suggest that many people with dementia have mixed Alzheimer’s disease and vascular dementia pathology and that this “mixed dementia” is underdiagnosed.
Source: Adapted with permission from Alzheimer’s Disease International, 2019.

Since the publication of the 2011 guidelines, researchers have increasingly come to understand that cognitive decline in AD occurs continuously over a long period, and that progression of biomarker measures* is also a continuous process that begins before symptoms are evident. The disease is now regarded as a continuum rather than three distinct clinically defined stages (Jack et al., 2018).

A 2018 update of the 2011 NIA-AA diagnostic guidelines added a “numerical clinical staging scheme.” This staging scheme reflects the sequential evolution of AD from an initial stage characterized by the appearance of abnormal biomarkers in asymptomatic individuals. As biomarker abnormalities progress, the earliest subtle symptoms become detectable. Further progression of biomarker abnormalities is accompanied by progressive worsening of cognitive symptoms, culminating in dementia (Jack et al., 2018).

In 2018 an Alzheimer’s Association workgroup lead by Alireza Atri published a report describing the need for clinical practice guidelines for use in primary and specialty care settings. The guidelines build on the NIA_AA guidelines but add a clinical component for the evaluation of cognitive impairment thought to be related to Alzheimer’s disease or a related type of dementia. 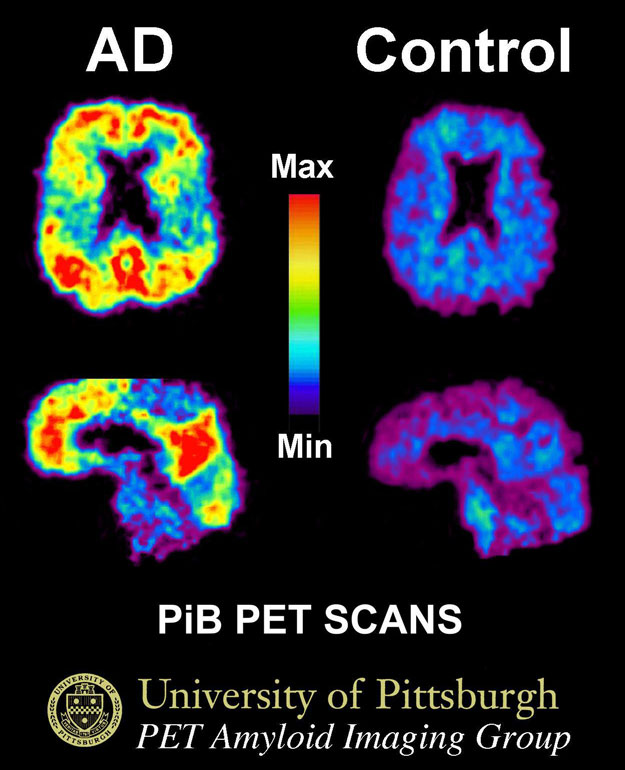 This image shows a PiB-PET scan of a patient with Alzheimer’s disease on the left and an elderly person with normal memory on the right. Areas of red and yellow show high concentrations of PiB in the brain and suggest high amounts of amyloid deposits in these areas. Source: By Klunkwe—Own work, CC BY-SA 3.0.

Neuroimaging is increasingly being used to assist with early diagnosis of Alzheimer’s disease and related dementias by detecting visible, abnormal structural and functional changes in the brain. Magnetic resonance imaging (MRI) can provide information about the shape, position, and volume of the brain tissue and is being used to detect brain shrinkage, which is related to excessive nerve death. Positron emission tomography (PET) uses a radioactive dye called PiB to detect the presence of beta amyloid plaques in the brain.

CSF biomarkers are measures of the concentrations of proteins in cerebral spinal fluid from the lumbar sac that reflect the rates of both production (protein expression or release/secretion from neurons or other brain cells) and clearance (degradation or removal) at a given point in time.

Sensory Impairment and the Changing Brain

Sensory impairment is something often overlooked by caregivers and healthcare professionals when interacting with an older adult with dementia. Both hearing impairment and visual impairments must be taken into account when assessing difficult behaviors as well as a person’s ability to complete common activities of daily living.

For a person with dementia, hearing and visual impairments are associated with adverse outcomes. For example, hearing impairment is associated with poor self-rated health, difficulties with basic and instrumental activities of daily living, difficulty with memory, frailty, and falls (Guthrie et al., 2018).

Similarly, visual impairment has been linked to an increased risk of mortality, difficulties with independence in activities of daily living, difficulty with mobility, and reduced social participation. Individuals with visual impairment also are more likely than those without visual impairment to require community-based supports (Guthrie et al., 2018).

Loss of cells in the part of the brain that processes vision (occipital lobe) causes a narrowing of the visual field and a loss of peripheral vision. Vision becomes narrows and becomes binocular, which means items placed on a table in front of a person (such as food) may be outside of a person’s remaining visual field. Vision is also a critical for good balance and visual impairment means a person begins to rely on touch to help with balance.

Macular degeneration, a common visual impairment in older adults causes loss of vision in the center of the eye, making it difficult to see something directly in front of you.

Because of damage to the visual pathways in the brain, the visual field narrows, making it difficult to see above, beside, and below. Source: National Eye Institute, National Institutes of Health. Public domain.

Normal vision on the left and damage cause by macular degeneration on the right. Source: National Eye Institute, National Institutes of Health. Public domain.

There are medical conditions other than dementia can cause cognitive changes in older adults. Gerontology specialists speak of the “3Ds”—dementia, delirium, and depression—because these three conditions are the most common reasons for cognitive changes in older adults. Delirium and depression are often mistaken for dementia. As a care provider with direct, daily contact with clients, your observations and feedback help healthcare providers identify changes that may be treatable.

Delirium is a sudden, severe confusion with rapid changes in brain function. Delirium develops over hours or days and is typically temporary and reversible. Delirium affects perception, mood, cognition, and attention. The most common causes of delirium in people with dementia are medication side effects, hypo or hyperglycemia (low or high blood sugar), fecal impactions, urinary retention, electrolyte disorders and dehydration, infection, stress, and metabolic changes. An unfamiliar environment, injury, or severe pain can also cause delirium.

Depression is a common but serious mood disorder. Major depressive disorder is characterized by a combination of symptoms that interfere with a person’s ability to work, sleep, study, eat, and enjoy activities. Some people may experience only a single episode within their lifetime, but more often a person may have multiple episodes (NIMH, 2018).

Persistent depressive disorder is characterized by long-term (2 years or longer) symptoms that may not be severe enough to disable a person but can prevent normal functioning or feeling well. Psychotic depression occurs when a person has severe depression plus some form of psychosis, such as delusions or hallucinations. Psychotic symptoms typically have a depressive “theme,” such as delusions of guilt, poverty, or illness (NIMH, 2018).

Depression is very common in people with dementia. Almost one-third of long-term care residents have depressive symptoms and about 10% meet criteria for a current diagnosis of major depressive disorder. Despite this awareness, depression is undertreated in people with dementia. Depressive illness is associated with increased mortality, risk of chronic disease, and higher levels of supported care (Jordan et al., 2014).

Symptoms of depression can include: