The misuse and abuse of drugs is a crisis in our country and around the world. By 2020 mental health and substance abuse disorders will surpass all physical diseases as a major cause of disability worldwide. Abuse of prescription drugs / drug diversion is the largest drug problem in the United States, and one that is growing. According to the United States Centers for Disease Control and Prevention (CDC), people from all age groups, ethnic backgrounds, and genders are affected by this disease.

The 2016 National Survey on Drug Use and Health (NSDUH) indicates 28.6 million people aged 12 or older used an illicit drug in the past 30 days, which corresponds to about 1 in 10 Americans overall (10.6%) and an estimated 11.8 million people misused opioids in the past year, including 11.5 million pain relief misusers and 948,000 heroin users.

Health professionals face a dilemma because their patients often need prescription drugs but they also face a need to prevent the diversion and misuse of drugs. Among the prescription drugs diverted and misused are pain relievers, tranquilizers, stimulants, and sedatives. Opioid analgesics are powerful painkillers medically indicated in the treatment of chronic pain; however, when the patient takes the wrong dose, or the wrong person takes the opioid pain medication, the consequences can be deadly.

While the sales of opioid analgesics increased 4-fold between 1999 and 2010, the United States concurrently experienced an almost 4-fold increase in opioid overdose deaths (SAMHSA/NSDUH, 2014). Other consequences of the abundance of opioids include emergency department visits and admissions, falls and fractures in older adults, and initiating injection drug use, which increases risk for infections such as hepatitis C and HIV.

West Virginia’s SB437 is a response to the state’s need for additional education about drug diversion and abuse mitigation. The following are some statistics for West Virginia:

* Neonatal Abstinence Syndrome (NAS) is a withdrawal syndrome that occurs after prenatal exposure to drugs is discontinued suddenly at birth. 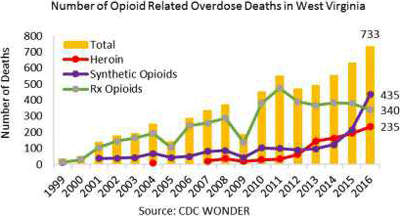 What is the role of clinicians in the problem of prescription drug diversion, misuse, and abuse? Clinicians are in a unique position to educate, identify, and intervene with patients and colleagues who are at risk for prescription drug misuse and abuse. Recognizing the signs of misuse and risk factors of drug abuse and diversion by patients and fellow healthcare professionals is an important responsibility of all clinicians. Educated health professionals can be instrumental in changing patterns of misuse and abuse of prescription drugs for individuals, colleagues, and communities, and thereby reducing the public health epidemic.

Addiction: a primary, chronic, neurobiologic disease whose development and manifestation is influenced by genetic, psychosocial, and environmental factors. Addiction behaviors often include impaired control over use, compulsive use, continued use despite resulting harm, and craving (Corsini & Zacharoff, 2014). Like other chronic diseases, addiction often involves cycles of relapse and remission. The Diagnostic and Statistical Manual of Mental Disorders, Fifth Edition (DMS-5) does not use the term addiction for diagnosis (SAMHSA, 2018).

Abuse/nonmedical use: Abuse is the use of an illicit drug or the intentional self-administration of a prescription (or over-the counter) medication for any nonmedical purpose, such as altering one’s state of consciousness, eg, “getting high.” However, some critics dislike the term abuse being applied to substance use disorders and claim it is inaccurate and reflects morality-based language to depict what may actually be a medical condition (Corsini & Zacharoff, 2014).

Chronic pain: any pain that lasts several months (variously defined as 3 to 6 months), but may last for months or years. Whereas acute pain is a normal sensation that alerts the body to injury or damage, chronic pain persists. Chronic pain may result from an injury or an ongoing cause such as illness, or there may be no clear cause (NIH, 2018).

Diversion: the intentional removal of a medication from legitimate distribution and dispensing channels. Diversion also involves the sharing or purchasing of prescription medication between family members and friends or individual theft from family and friends (Corsini & Zacharoff, 2014). Diversion can also occur in healthcare settings if health professionals divert medication from the intended recipient.

Opioid use disorder (OUD): per the DSM-5, a disorder characterized by loss of control of opioid use, risky opioid use, impaired social functioning, tolerance, and withdrawal. Tolerance and withdrawal do not count toward the diagnosis in people experiencing these symptoms when using opioids under appropriate medical supervision. OUD covers a range of severity and replaces what DSM-IV termed “opioid abuse” and “opioid dependence.” An OUD diagnosis is applicable to a person who uses opioids and experiences at least 2 of the 11 symptoms in a 12-month period (SAMHSA, 2018).

Misuse: any therapeutic use of a medication other than as directed or indicated, whether intentional or unintentional, and regardless of whether it results in harm. Increasing a medication dose without prescriber approval is misuse, whether the reason is dependence, tolerance, desire to achieve greater therapeutic effect, or forgetfulness (Corsini & Zacharoff, 2014).

Physical dependence: a state in which the body has adapted to a drug or class of drugs to the degree that withdrawal syndrome occurs upon abrupt cessation, rapid dose reduction, decreasing blood level of the drug, and/or administration of an antagonist (Corsini & Zacharoff, 2014).