Mental health has traditionally been the purview of psychiatrists and mental health practitioners. Over the last two to three decades however, family practice physicians, nurse practitioners, allied health professionals, social workers, and other healthcare providers are increasingly responsible for screening, assessing, and managing chronic mental health problems. Because of this, all healthcare providers must be knowledgeable about suicide risk factors and warning signs; understand suicide assessment and screening tools; and know when, where, and how to treat or refer a client who is at risk for self-harm.

Throughout the world, suicide is an increasingly serious public health concern. Every year over 800,000 people die by suicide, and between 10 and 20 million attempt suicide. Often suicidal thoughts precede a suicide attempt or completed suicide. Among those thinking about suicide, about one-third attempt suicide, and more than half of these attempts occur within the first year after the onset of suicidal thoughts (Brüdern et al., 2018).

Suicide rates vary from state to state. Source: CDC, 2018a.

In the United States, approximately 47,000 people die from suicide each year, making it the country’s tenth leading cause of death (NIMH, 2019). Suicide is not limited to any one age, socioeconomic or ethnic group, or gender. Remarkably, in 2017 there were more than twice as many suicides in the United States as homicides (NIMH, 2019). 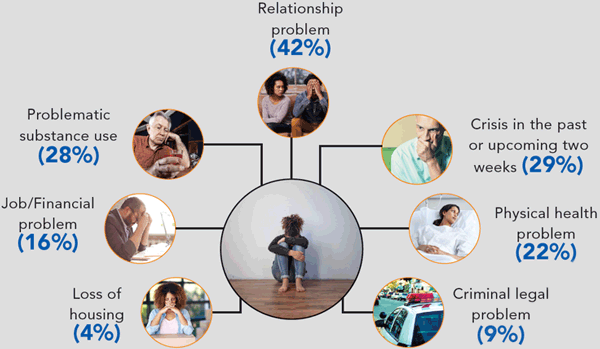 Many factors contribute to suicide among those with and without known mental health conditions.
Source: CDC’s National Violent Death Reporting System, data from 27 states participating in 2015.

Biological, psychological, social, environmental, and situational factors influence suicidal behaviors. Childhood trauma, substance abuse, poverty, untreated mental health problems, loss of housing, financial difficulties, health problems, legal issues, and relationship problems are some of the factors that may contribute to suicidal ideation and behaviors. Unfortunately, many people do not or cannot get the help they need because of provider shortages, stigma, and the cost of care.