The four lobes of the cerebrum, plus the cerebellum and the brainstem. Alzheimer’s disease starts in the temporal lobe in an area called the hippocampus. Copyright, Zygote Media Group, Inc. Used with permission.

Areas of the Brain

The cerebellum and brainstem are at the back of your head below the cerebrum. 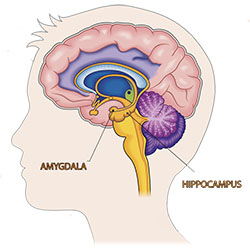 The hippocampus is involved with creation of short-term memories. The amygdala is involved with emotional control. Source: National Institutes of Health, Credit: iStock/Jambojam. Public domain.

Alzheimer’s disease begins in the area of the brain that makes new memories, called the hippocampus. The hippocampus is the memory center of the brain, responsible for forming short-term memories. That’s why someone with AD forgets something that happened just a moment ago. This part of the brain also helps us associate memories with various senses, such as smell.

Emotions are also affected when someone gets dementia. That’s why those with Alzheimer’s disease or other types of dementia sometimes have difficulty controlling their emotions.

When someone has dementia, their thinking becomes less clear. Decisions are more difficult and safety awareness declines. These people also tire more easily. Eventually, people with dementia lose the ability to take care of themselves. In the end, they may also lose their appetite and stop eating.

Dementia changes the entire brain. In Alzheimer’s disease, nerve cells in the brain are damaged by things called plaques and tangles. As the nerve cells die, the brain gets smaller. Over time, the brain shrinks, affecting nearly all its functions.

In Alzheimer’s disease, damage begins in the temporal lobe, in and around the hippocampus. The hippocampus is a part of the brain that is responsible for new memories, spatial awareness, and control of emotions.

As the disease progresses, plaques and tangles spread to the front part of the brain (the temporal and frontal lobes). These areas of the brain are involved with language, judgment, and learning. Speaking, and understanding speech, the sense of where your body is in space, and executive functions such as planning and ethical thinking are affected.

We all experience changes as we age. Some people become forgetful when they get older. They may forget where they left their keys. They may also take longer to do certain mental tasks. They may not think as quickly as they did when they were younger. These are called age-related changes. This is a normal part of aging—it is not dementia.

Changes in behavior can occur in older adults and may be a risk factor for dementia. This is called mild behavioral impairment or MBI. Signs of MBI are apathy, mood swings, anxiety, agitation and aggression, social withdrawal, and abnormal thoughts (Matsuoka et al., 2019).

Alzheimer’s disease affects a person’s ability to make new memories. This is called short-term memory loss. This happens because the part of the brain where new memories are formed becomes damaged by dementia.

Long-ago memories are stored in a part of the brain that is not affected by Alzheimer’s dementia. Especially at first, people can remember and talk about events from earlier times in their lives. As the dementia gets worse and more of the brain is affected, long-ago memories might also start to fade.