2. How the Brain Works

The brain is a communications center consisting of billions of neurons, or nerve cells. It is the most complex organ in the body. This three-pound mass of gray and white matter is at the center of all human activity—you need it to drive a car, to enjoy a meal, to breathe, to create an artistic masterpiece, and to enjoy everyday activities. The brain regulates your body’s basic functions; it enables you to interpret and respond to everything you experience and shapes your thoughts, emotions, and behavior (NIDA, 2018).

Networks of neurons pass messages back and forth among different structures within the brain, the spinal cord, and the nerves in the rest of the body (the peripheral nervous system). These nerve networks coordinate and regulate everything we feel, think, and do (NIDA, 2018). Dementia interrupts the efficient function of these networks, affecting every aspect of a person’s life.

Alzheimer’s disease and other types of dementia damage the brain. The most significant and obvious damage occurs in the critically important part of the brain called the cerebrum. The cerebrum fills up most of our skull and is divided into four lobes:

The four lobes of the cerebrum, plus the cerebellum and the brainstem. Alzheimer’s disease starts in the hippocampus, located in the temporal lobe. ©Zygote Media Group, Inc. Used with permission.

When dementia strikes, brain cells in the cerebrum begin to shrink and die. As the damage progresses, brain cells are no longer able to communicate with one another as well as they did in the past. Not surprisingly, as more and more brain cells are damaged, connections are lost, pathways are disrupted, and eventually people with dementia lose many brain functions.

Because the right and left sides of each lobe differ in function, the location of the deterioration is important to understand. For example, damage in the left frontal and temporal lobes can affect the so-called language centers, causing difficulties with speech and language comprehension, while damage to the right hemisphere can cause problems with spatial perception and identifying objects by touch.

it is easy to exaggerate the differences between the functions of the left and right hemispheres; both hemispheres are involved with most processes. Additionally, neuroplasticity (the ability of a brain to adapt to experience) enables the brain to compensate for damage to one hemisphere by taking on extra functions in the other half, especially in young brains (Lumen Learning, n.d.).

Hemispheres of the Brain

In addition to the cerebrum, the human brain has two other important parts: the cerebellum and the brainstem. Touch the back part of your head just below the occipital lobes. The cerebellum is right there. It is involved with coordination and balance.

The cerebellum and brainstem are at the back of your head below the cerebrum. Source: NIH. Used with permission.

Now move your hand a little down and stop before your get to your spine. The brainstem is right there—at the back of the head, above your spine. It connects the brain to the spinal cord. The brainstem oversees automatic functions such as breathing, digestion, heart rate, and blood pressure. Although it is possible for the brainstem and cerebellum to be damaged by stroke or traumatic injury, they are generally not affected by dementia.

Damage to the hippocampus can cause a person with dementia, particularly someone with Alzheimer’s disease, to forget something that happened just a moment ago. Although most types of dementia start in one part of the brain, eventually the entire brain will be affected.

Alzheimer’s disease isn’t the only cause of dementia and, unfortunately, there is no way to know for sure what type of dementia a person has. Early diagnosis remains a key focus and goal of research.

Diagnosis of AD is most often based on a combination of medical history and detailed physical, neurologic, and neuropsychological exams. Brain imaging can be used but early preclinical dementia is difficult to diagnose accurately using these methods. In recent years, a number of soluble components in cerebrospinal fluid (CSF) and blood have been identified as potential, useful biomarkers* for AD (DeMarshall et al., 2019).

*Biomarkers: A measurable substance that may indicate the presence of a particular biologic state, a clinical disease, an environmental exposure, or disease susceptibility.

Measuring biomarkers for brain diseases in blood is the focus of intense research although there are a number of challenges. Because of the blood-brain barrier, biomarkers are generally present at relatively low concentrations in blood taken from the brain. In addition, some biomarkers related to AD pathology are expressed in non-cerebral tissues, which may confound their measurement in the blood. Blood may also contain antibodies, which can give falsely high or low results. This is less of a problem in CSF because antibody levels in CSF are much lower. Finally, the biomarker of interest may be degraded by various substances in blood plasma (Zetterberg & Burnham, 2019).

Recently, a blood test has been developed that measures a specific variant of tau protein in an ordinary blood plasma sample. The test measures the presence of the P-tau181 variant, using a method called Single Molecule Array (Simoa). P-tau181 has long been measured in CSF and is seen in advanced positron emission tomography (PET) scans. But both of these methods are expensive and not universally available and therefore not practical in primary care settings (Gustafsson Kubista, 2020).

There is potential to use this blood test to identify Alzheimer’s in its early stage when cognitive impairment is mild. This may provide primary care practitioners the ability to evaluate and treat people early in the disease rather than when symptoms are so obvious that they show up during cognitive testing.

Symptoms differ little among the types of dementia. It is good to know the difference to help you understand why someone is acting the way they are. Characteristics of Alzheimer’s dementia will be described in module 2.

Lobes of the Brain

There is a type of dementia that affects this part of the brain. It is called frontal-temporal dementia. It is thought to be the most common type of dementia in people under the age of 60 and is responsible for 5% to 10% of all cases of dementia. It’s not nearly as common as Alzheimer’s and usually starts at a much younger age.

So instead of losing short-term memory like people with Alzheimer’s disease, a person with frontal-temporal dementia might start doing things that are confusing to their friends and family. They might steal, even though they have never stolen in the past. They might make inappropriate sexual remarks or engage in inappropriate sexual behaviors, even though they have never done these things in the past.

Vascular dementia is a general term used to describe changes in cognition resulting from impaired blood flow to the brain. It can be caused by a stroke or a series of small strokes or any condition that causes brain damage or reduces blood flow to the brain. Factors that increase the risk of heart disease such as diabetes, high blood pressure, high cholesterol, and smoking also increase the risk of developing vascular dementia. You might have cared for more than one client with vascular dementia because many older adults have high blood pressure that isn’t under good control.

Vascular dementia is responsible for 20-30% of all cases of dementia. Generally, vascular dementia doesn’t affect memory as much (or in the same way) as Alzheimer’s, at least in its early stage. Symptoms are related to the part of the brain experiencing reduced blood flow.

Lewy body dementia is a spectrum of disorders rather than a single diagnosis. LBD is less common than Alzheimer’s dementia, but more common than frontal-temporal and vascular dementia. 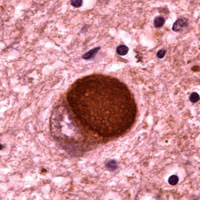 There are two types of LBD: dementia with Lewy bodies and Parkinson’s disease dementia, which share a common etiology. Symptoms are caused by the buildup of Lewy bodies—accumulated bits of alpha-synuclein protein—inside the nuclei of neurons in areas of the brain that control certain aspects of memory and motor control. These unwanted molecules (Lewy bodies) can become scattered throughout the brain. Symptoms can include:

In general, memory is less affected than in Alzheimer’s disease, at least at first. But hallucinations, visuospatial changes, fluctuation in cognitive abilities, and sudden confusion can be present. These symptoms may come and go throughout the day.

How Dementia Affects the Brain

Dementia changes the entire brain. In Alzheimer’s disease, nerve cells in the brain die and are replaced by abnormal proteins called plaques and tangles. As the nerve cells die, the brain gets smaller. Over time, the brain shrinks, affecting nearly all its functions.

Alzheimer’s disease usually affects memory and emotional control before other symptoms are obvious. Other types of dementia, because the damage is to another part of the brain, will have different symptoms. Although dementia can start in one part of the brain, eventually it will affect the entire brain.

We all experience physical and mental changes as we age. Some people become forgetful when they get older. They may forget where they left their keys. They may also take longer to do certain mental tasks. They may not think as quickly as they did when they were younger. These are called age-related changes. These changes are normal—they are not dementia.

Age-related changes don’t affect a person’s life very much. Someone with age-related changes can easily do everything in their daily lives—they can prepare their own meals, drive safely, go shopping, and use a computer. They understand when they are in danger and continue to have good judgment. They know how to take care of themselves. Even though they might not think or move as fast as when they were young, their thinking is normal—they do not have dementia.

The table below describes some of the differences between someone who is aging normally and someone who has dementia.

In some older adults, memory problems are a little bit worse than normal age-related changes. When this happens, the person has mild cognitive impairment, also called MCI.

Since the publication of the 2011 guidelines, researchers have increasingly come to

A 2018 update of the 2011 NIA–AA diagnostic guidelines added a “numerical clinical staging scheme.” This staging scheme reflects the sequential evolution of AD from an initial stage characterized by the appearance of abnormal biomarkers in asymptomatic individuals. As biomarker abnormalities progress, the earliest subtle symptoms become detectable. Further progression of biomarker abnormalities is accompanied by progressive worsening of cognitive symptoms, culminating in dementia (Jack et al., 2018).

In 2018 an Alzheimer’s Association workgroup lead by Alireza Atri published a report describing the need for clinical practice guidelines for use in primary and specialty care settings. The guidelines build on the NIA_AA guidelines but add a clinical component for the evaluation of cognitive impairment thought to be related to Alzheimer’s disease or a related type of dementia. Key components include: