Florida: Human Trafficking for PTs and PTAsPage 4 of 10

From sex trafficking within escort services to labor trafficking of farmworkers, the ways humans are exploited differ greatly. Each type has unique strategies for recruiting and controlling victims and concealing the crime.

To eradicate human trafficking networks and help survivors, we must be able to identify and disrupt the manifestations of trafficking in our communities.

From a global perspective there are two general categories of human trafficking: sex trafficking and labor trafficking. However, different entities may break these down with variations that reflect the complexity of the problem and differing experiences in specific areas.

Businesses That May Be Involved in Human Trafficking

An important consideration here is that, while some of these business categories are clearly illegal, most also have entirely legitimate functions in our economy and the ability to spot possible indicators of human trafficking requires being observant, asking good questions, and being willing to "see" what might not seem obvious (Polaris, 2020).

Sex trafficking is the crime of using force, fraud, or coercion to induce another individual to sell sex (Polaris, 2020b), and it is the most prevalent form of human trafficking in the United States. Sex trafficking is a high-profit and low-risk business where the commodity—the human being's body—can be sold repeatedly (Roe-Sepowitz et al., 2015). And, the highest profits per victim are in developed economies (Kelly, 2019). As noted earlier, common types of sex trafficking include escort services, pornography, illicit massage businesses, brothels, and outdoor solicitation (Polaris, 2020b).

Recruitment of child victims in the United States happens at malls, schools, bus and train stations, and group homes, among other locations—anywhere that children congregate. Traffickers are also recruiting through Facebook and other internet sites. Traffickers also use peers or classmates to befriend targets and slowly groom them to join the life (NCSSLE, 2020).

Grooming, a psychological and physical process aimed at transitioning a victim to a dependent role, is an integral part of the recruitment process. After targeting a potential victim, the abuser works to gain information about the victim and establish trust. Once the abuser discovers a need in the victim's life that they can fill—usually using manipulation, false promises, substance abuse, and violence—they have begun a process that leads to isolation of the victim and the beginning of abuse, often in the form of requirements for sex as payment for services. The abuser then maintains control of the victim, frequently by means of threats, violence, fear, or blackmail (Long, 2014).

Among pimps (someone who manages trafficking victims in order to commodify their bodies) a distinction is sometimes made between finesse pimps and guerilla pimps. Finesse pimping (more common with child victims) is accomplished by manipulative practices, aimed at convincing victims they love or care about them, but once seduced, control is maintained with physical and psychological torture. These tactics lead to a loss of autonomy for the victim and complete obedience to the pimp. Finesse pimps are skillful at identifying specific vulnerable children and exploiting their weaknesses, often using the "glamour" of the pimp/ho culture along with cultural acceptance of the demand for child victims as a means to maintain control (Williamson, 2015).

Guerilla pimps use violence and intimidation to manage victims and are more common among those trafficking adults. 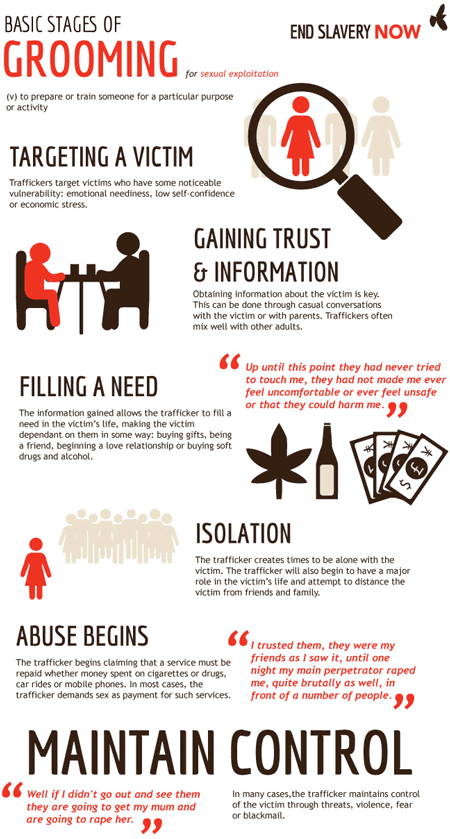 Labor trafficking is another major type of human trafficking and may be divided into forced labor and domestic servitude (see image above). In the United States, the Trafficking Victims Protection Act of 2000 (TVPA) defines labor trafficking as "the recruitment, harboring, transportation, provision, or obtaining of a person for labor or services, through the use of force, fraud or coercion for the purpose of subjection to involuntary servitude, peonage, debt bondage or slavery."

Peonage is a status or condition of involuntary servitude based on real or alleged indebtedness. Debt bondage includes a pledge of services by a debtor (or someone under their control) to pay down known or unknown charges. The length and nature of the services are not limited or defined and the debtor is trapped in a cycle they can never escape (OTIP, 2017).

Labor trafficking includes people forced to work in homes as domestic servants, farmworkers coerced with violence while harvesting crops, or factory workers operating in inhumane conditions with little to no pay. A very large number of consumer and food products purchased in the United States are made with at least some elements of forced labor, and this includes items produced inside and outside the country (NHTH, 2020d).

Most female trafficking victims of labor exploitation are in domestic work and hospitality but most male victims are found in agriculture and construction. In manufacturing, the gender of victims is roughly equal (IOM, 2018).

In human trafficking of children, the sources of recruitment are:

The main sectors of forced labor are:

And the main methods of control are:

About 71% of identified victims of human trafficking are women and 66% of child recruits are female, with 31% of children trafficked for forced labor and 58% for sexual exploitation (IOM, 2018, 2017).