The physical structure of HIV is characterized by a protein shell that surrounds the genetic information and enzymes of the virus; a lipid membrane that circles the protein capsule; and glycoproteins that dot the surface of the virus, which aid in processes such as entry into macrophages and T-helper cells of the host. Illustration provided by Zygote Media.

The human immunodeficiency virus (HIV) kills or impairs the cells of the immune system and progressively destroys the body’s ability to protect itself. Over time a person with a deficient immune system (immunodeficiency) may become vulnerable to infections by disease-causing organisms such as bacteria or viruses. These infections can become life-threatening.

The term AIDS is an acronym for “acquired immunodeficiency syndrome,” and it refers to the most advanced stage of HIV infection. Medical treatment can delay the onset of AIDS, but HIV infection eventually results in a syndrome (combination) of symptoms, diseases, and infections. The diagnosis of AIDS requires evidence of HIV infection plus the appearance of some specific conditions or diseases. Only a licensed medical provider can make an AIDS diagnosis.

HIV Infection in the Body

HIV enters the bloodstream and seeks out T-helper lymphocytes, white blood cells essential to the functioning of the immune system. One of the functions of these T-cells is to regulate immune response in the event of attack from disease-causing organisms such as bacteria or viruses. When the virus infects the T-helper lymphocyte, the cell sends signals to other cells, which produce antibodies. This T-helper lymphocyte cell may also be called the T4 or the CD4 cell. 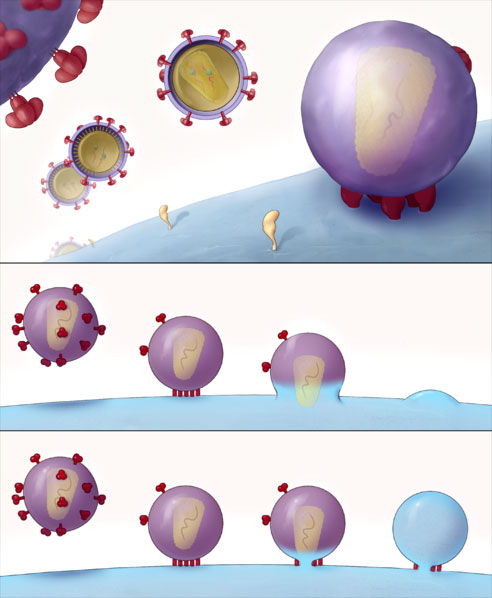 These stages as sometimes referred to as the “natural history” of disease progression. The natural history of HIV infection has been altered dramatically in developed countries because of new medications. In countries where there is no access to these expensive medications, or in cases where people do not become aware of their HIV infection until very late, the disease progresses as described above (WSDOH, 2007).

The first test done on a specimen is a screening test called an enzyme-linked immunosorbent assay (ELISA, or EIA). This type of test screens for the presence of antibodies to HIV in blood, urine, or oral fluid. Screening tests are inexpensive and highly accurate.

Most HIV antibody screening tests are conventional, in that the specimen is collected from the client and sent to a laboratory for testing. If a screening test is negative (no antibodies detected), the results can be released to the client. If the screening test is reactive (positive) at the laboratory, a confirmatory Western Blot test is conducted on the same sample.

Rapid tests are also screening tests, but they are conducted at the test site, often with the client present, and negative results are available in under an hour. Reactive (antibodies detected) results from a rapid test must be confirmed. This is because there is a small chance that an HIV screening test may detect proteins related to other autoimmune diseases and react to those proteins with a positive result.

If a rapid test is reactive, an additional specimen must be drawn from the client and sent to the lab for confirmatory Western Blot testing. The HIV Western Blot detects antibodies to the individual proteins that make up HIV. This test is much more specific, and more costly, than the ELISA screening test.

The rapid test is an immunoassay used for screening and it produces quick results, in 20 minutes or less. Rapid tests use blood or oral fluid to look for antibodies to HIV. If an immunoassay (lab test or rapid test) is conducted during the window period (ie, the period after exposure but before the test can find antibodies), the test may not find antibodies and may give a false-negative result. All immunoassays that are positive need a followup test to confirm the result (CDC, 2013b). Information about FDA-approved tests and their use in various settings is available through the CDC website.

Currently there are only two home HIV tests: OraQuick In-home HIV test and the Home Access HIV-1 Test System. If you buy your home test online make sure it is FDA-approved (CDC, 2013b).

The OraQuick In-Home HIV Test provides rapid results in the home. The testing procedure involves swabbing the mouth for an oral fluid sample and using a kit to test it. Results are available in 20 minutes. If you test positive, you will need a follow-up test. The manufacturer provides confidential counseling and referral to followup testing sites. Because the level of antibody in oral fluid is lower than it is in blood, oral fluid tests find infection later after exposure than do blood tests. Up to 1 in 12 people may test false-negative with these tests (CDC, 2013b).

The Home HIV Access HIV-1 Test System is a home collection kit, which involves pricking your finger to collect a blood sample, sending the sample to a licensed laboratory, then calling in for results a few days later. If the test is positive, a followup test is performed right away. This test is anonymous. The manufacturer provides confidential counseling and referral to treatment. The tests conducted on the sample collected at home find infection later than most lab-based tests offered by providers (CDC, 2013b).

A positive test result means you are HIV-positive and can infect others who come in contact with your blood, semen, or vaginal fluids. A negative result means there are no antibodies to HIV in your blood at the time of the test. A negative test does not mean you are HIV negative—you may be infected but be in the “window period”—a period lasting up to 6 months in which an infected person has no detectable antibodies in their blood.