Abuse of Children and Dependent Adults

Abuse of Children and Dependent AdultsPage 3 of 10

Illness, age, and disability render people vulnerable to abuse by those on whom they depend for care and protection. Abuse is an age-old crime that takes many forms: physical, psychological, sexual, and financial. It is a hidden form of mistreatment, occurring in private homes, adult daycare, and long-term care institutions. Adult abuse is far less likely to be reported than child abuse because of lack of public awareness. Abuse is “an intergenerational concern, as well as a health, justice, and human rights issue” (Lowenstein, 2009).

The maltreatment of children and of dependent adults (elders and other vulnerable adults) is a social issue as well as a public health issue and it presents problems for the entire community. Achieving the goals of intervention, protective services, and prevention requires the coordination of many resources. Both types of abuse share many things in common but there are some distinctions that will be discussed throughout the course.

Federal legislation lays the groundwork for state laws on child maltreatment by identifying a minimum set of actions or behaviors that define child abuse and neglect (CWIG, 2019).

The Federal Child Abuse Prevention and Treatment Act (CAPTA) (amended and reauthorized in 2010), defines child abuse and neglect as, at a minimum, “any recent act or failure to act on the part of a parent or caretaker which results in death, serious physical or emotional harm, sexual abuse or exploitation (including sexual abuse as determined under section 111), or an act or failure to act which presents an imminent risk of serious harm” (42 U.S.C. 5101 note, § 3) (CWIG, 2019; ACF, 2017).

Additionally, it stipulates that “a child shall be considered a victim of ‘child abuse and neglect’ and of ‘sexual abuse’ if the child is identified, by a State or local agency employee of the State or locality involved, as being a victim of sex trafficking (as defined in paragraph (10) of section 7102 of title 22) or a victim of severe forms of trafficking in persons described in paragraph (9)(A) of that section” (42 U.S.C. § 5106g(b)(2)) (CWIG, 2019).

Most federal and state child protection laws primarily refer to cases of harm to a child caused by parents or other caregivers; they generally do not include harm caused by other people, such as acquaintances or strangers. Some state laws also include a child’s witnessing of domestic violence as a form of abuse or neglect (CWIG, 2019).

Abuse and neglect of a child by a parent, caregiver, or other person in a custodial role (eg, clergy, coach, teacher) are actions that result in harm, potential for harm, or threat of harm to the child. The four common types of abuse and neglect are:

Most states recognize these four major forms of maltreatment. Many also classify abandonment, parental substance use, and human trafficking as abuse or neglect. As a way of addressing the abandonment of infants many states have passed “safe-haven” laws that allow the surrender of a newborn infant up to a certain age under specific conditions where the parents are exempt from charges of abandonment or abuse (CWIG, 2019; ACF, 2017).

Effects of child abuse and neglect are both immediate and long term. Cuts, bruises, and broken bones, along with emotional or psychological problems such as impaired development and anxiety may be easily apparent, but left untreated or experienced chronically this maltreatment can lead to increased risk of injury, future violence victimization and perpetration, substance abuse, sexually transmitted infections, delayed brain development, reproductive health problems, involvement in sex trafficking, non-communicable diseases, lower educational attainment, and limited employment opportunities (CDC, 2019; CWIG, 2019, 2019a). 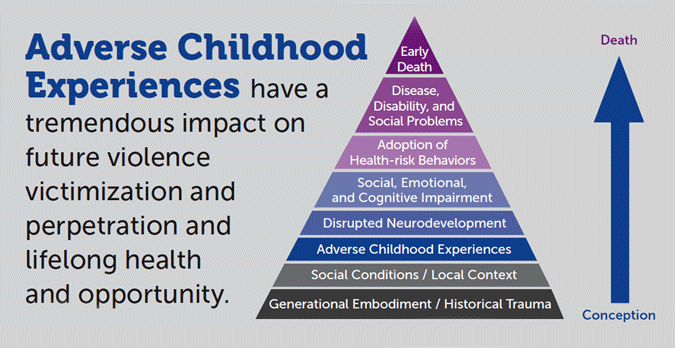 These physical, psychological, behavioral, and societal consequences affect abused children’s present and future lives but can also affect the lives of unborn children. Recent research has found that abused children may experience genetic changes associated with a variety of physical and psychological disorders (CWIG, 2019a).

Obviously, the mistreatment itself is foremost, but government agencies have a duty to assess the costs of public health problems. In the United States the total lifetime economic burden of child abuse and neglect rivals that of other high-profile public health problems, such as stroke and type 2 diabetes (CDC, 2019).

Child abuse and neglect are regrettably not uncommon, with approximately 1 in 7 children experiencing them in the last year, and this is believed to be an underestimation. The rates of child abuse and neglect are 5 times higher for children in families with low socioeconomic status as compared with those of higher socio-economic status (CDC, 2019).

Nationally, the 2017 Child Maltreatment Report, published by the Children’s Bureau (part of the Administration for Children & Families of the U.S. Department of Health and Human Services, or DHHS), indicates that the (national, rounded) number of children who received a child protective services investigation response or alternative response increased 10% from 2013 to 2017. While the number of victims has varied over the last 5 years, the number increased 2.7% between 2013 and 2107 (CB, 2017).

Dependent adult abuse includes the abuse of elders (defined by the federal Older Americans Act of 1965 as anyone over 60 years of age), but it also includes maltreatment of anyone over age 18 whose physical and/or mental condition makes them dependent on others for care or protection. The term vulnerable adult is often used to encompass both groups (ACL, 2017).

The Elder Justice Act was passed in 2010 and is the first comprehensive legislation at the federal level. to address the abuse, neglect, and exploitation of older adults The law authorized a variety of programs and initiatives to better coordinate federal responses to elder abuse, promote elder justice research and innovation, support Adult Protective Services systems, and provide additional protections for residents of long-term care facilities. The Elder Justice Act established the Elder Justice Coordinating Committee to coordinate activities related to elder abuse, neglect, and exploitation across the federal government (ACL, 2017a).

In general, dependent adult abuse refers to any knowing, intentional, or negligent act by a caregiver or other trusted person that causes harm or a serious risk of harm to the vulnerable adult. All fifty states have some form of law preventing elder abuse, but these laws and the definitions they employ vary considerably, so it is important to understand the specific laws of your state (ACL, 2019; CDC, 2019a; CDC, 2016; NAPSA, 2019).

Other terms that are sometimes treated as separate types or as components of those above include:

Like child abuse, dependent adult abuse has short- and longer-term impacts. Elder abuse’s many negative impacts exist on both micro and macro levels:

The National Council on Elder Abuse notes that experts have reported that knowledge about elder abuse lags as much as two decades behind the fields of child abuse and domestic violence. The need for more research is urgent and it requires a coordinated, systematic approach that includes policymakers, researchers, and funders (NCEA, 2019).

Research on elder abuse as proven to be especially challenging due to variations in definitions; ethical dilemmas; the unfamiliarity of Institutional Review Boards (IRBs) with elder abuse research; variations in standards and methods; reconciling different conclusions as to which type of abuse is most common; research translation; the lack of definitions of successful outcomes, which is an impediment to developing effective interventions; and finally a severe shortage of researchers (NCEA, 2019).

The NCEA notes that we simply do not know with certainty how many people suffer from elder abuse and neglect. Signs of this abuse may be missed by professionals working with the older population because of poor training and lack of awareness. In addition, elders may be reluctant to report abuse for a variety of reasons (NCEA, 2019).

The NCEA notes a several research findings of importance (2008–2015) while noting that studies use differing methodologies and definitions and may reflect regional differences:

Financial exploitation is a fast-growing form of abuse of vulnerable adults. In recent research, 1 in 20 elders reported recent incidents of perceived financial mistreatment, and 90% of abusers are family members or trusted others, such as caretakers, neighbors, friends, and professionals (attorneys, doctors and nurses, pastors, bank employees). Elder abuse in all forms is seriously underreported and only 1 in 44 cases of financial abuse is ever reported (NAPSA, 2019).