Home » Overmedication: A Hazard for Elders

Overmedication: A Hazard for Elders

Overmedication: A Hazard for EldersPage 3 of 9

1. The Challenges of Polypharmacy

Leona, a 78-year-old female, didn’t sound like herself on the phone while chatting with her son. She and her husband lived alone after raising their four children. They enjoyed their retirement years, generally sitting at home watching TV and sewing or reading.

Leona had many health problems, including chronic bronchitis, diabetes, visual problems, neuropathy, hypertension, hypothyroidism, and depression, and was on medications for each. In addition, she was taking over-the-counter vitamin supplements and herbal remedies that a friend had told her about, which summed to over 12 medications daily. As Leona’s vision worsened, so did her memory of which medications she had already taken from all of the bottles in her medicine cabinet.

Now, her son noticed her speech was slurred, she couldn’t keep up with the conversation, and was repeating herself. After work, he drove to her home only to find his mother more confused and his father unsure what to do for her. He took her to the hospital ED.

Hours later, and after multiple tests, it was determined she had taken too many medications over the past week, which had induced delirium.

The concurrent use of multiple drugs, especially in elders, is a serious and often fatal issue. Unfortunately, the scenario above is all too common in the United States, especially in our geriatric population. 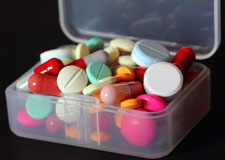 In addition to the increased risk of ADRs, other complications include medical illiteracy, which may lead to nonadherence to the treatment regimen and prescription instructions; this is exacerbated by the likelihood that each medication may have a different schedule.

Medication management is a challenge for the older adult due to decreasing vision and dexterity, concomittant diseases, multiple caregivers and physicians, financial ability to pay for medications, nonadherence, declining metabolism, and often memory decline. More than 90% of those 65 or older use at least one medication per week, 40% take five or more, and 12% use ten or more (Qato et al., 2008). Medication errors cause 10% to 30% of all hospitalizations annually in older patients (Parameswaran et al., 2016).

Not only does polypharmacy create preventable healthcare costs, but it also significantly increases morbidity and mortality. It is estimated that almost one-third of older home health care patients are taking a medication that is considered inappropriate for older people (ANA, 2015). Inappropriate prescribing is common in older patients, as there may be multiple providers recommending differing interventions, and the prescriber’s information regarding current medications is based on patient report, which may or may not be reliable. It is estimated that nearly half of older adults are taking one or more mediations that are not clinically necessary (Maher et al., 2014).

Home medication management systems range from the careful and methodical to the random and arbitrary. Elders who have difficulty opening medication bottles may utilize the “candy dish” method—dumping multiple medications into one bowl and fishing out the appropriate medication at the scheduled time (see image above). Some older adults store medications in shopping bags or shoeboxes, while others carefully fill medication dividers weeks in advance. As the number of older adults increase, health professionals need to spend more time evaluating medication regimens.

The rate of growth in the number and proportion of older adults is unprecedented in the history of the United States. Two factors—longer life spans and the large cohort of aging baby boomers—will combine to double the population aged 65 and older in the next twenty-five years. By 2050 the population of age 65 and older is estimated to double to 83.7 million compared to the 43.1 million in just 2012 (CDC, 2014). Globally the proportion of elders is 8.5% and is projected to rise to 236 million people aged 65 and older (CDC, 2016a). Proper use of medications is critical to proper and cost-effective chronic disease management.

In the United States, 3% to 7% of all hospitalizations are for treatment of adverse drug reactions.

Improved medical care and prevention efforts have contributed to dramatic increases in life expectancy in the United States over the past century. These factors have caused a major shift in the leading causes of death, from infectious diseases and acute illnesses to chronic diseases and degenerative illnesses. The incidence of chronic disease increases with advancing age, causing Medicare expenditures to rise proportionally. Currently, about 92% of older Americans are living with at least one chronic condition and 77% suffer from at least two (NCOA, 2016). Elders who have developed multiple chronic diseases will therefore be at greater risk of being prescribed additional medicine as part of the treatment approach.

The cost of providing healthcare for an older American is 3 to 5 times greater than the cost for someone younger than 65. By 2030 the nation’s healthcare spending is projected to increase by 33% (Neuman et al., 2015). A large proportion of medical expenditure is attributable to medication-related problems, which cost the United States 200,000 lives and $21 billion a year (Andel, 2012). Elders are at risk because of their high rate of medication use. Strategies—including pharmaceutical care managed by clinical pharmacists, prescriber education programs, and others—are effective in a study setting but resource-intensive to implement in the population.

Pharmacodynamics refers to the effect that the drug has on the body, whereas, pharmacokinetics is the way the drug moves through the body of a person and includes the separate processes of ingestion, absorption, distribution, metabolism and excretion (Wynne et al., 2011). Age-related changes in physiology can render an older adult more sensitive to medications, making polypharmacy a major issue associated with adverse drug events (ADEs), increased hospitalizations, and a wasteful use of increasingly scarce resources. In elders, intestinal absorption slows, and kidneys and liver’s ability to metabolize drugs effectively in the first pass make drugs potentially more toxic in the body.

Polypharmacy significantly increases the chance for medication non-adherence, medication errors, and drug-drug, drug-food, and drug-disease interactions. The risk for ADRs increases as the number of medications increases. The older adult who has cognitive impairment, who is living alone, or who is seeing multiple prescribers, is especially at risk. As noted above, normal changes of aging alter the effects of medications, so that medications appropriate for younger people may be contraindicated in older adults due to lower muscle mass, slower renal clearance, and intestinal absorption.

In the United States, nearly 30% of all hospital admissions are older adults who have not taken their medications properly. The classes of drugs most commonly associated with ADRs in older adults include diuretics, warfarin, nonsteroidal anti-inflammatory drugs (NSAIDs), selective serotonin reuptake inhibitors (SSRIs), beta blockers, and angiotensin-converting enzyme inhibitors (ACEI) (Cresswell, 2007).

In a 12-month cohort study of nearly 28,000 Medicare+Choice enrollees cared for in an ambulatory clinic in1999–2000, researchers found that 75% of the participants received prescriptions for six or more prescription drugs. The list that follows presents specific prescription medication categories and percentages of enrollees receiving prescriptions (Lococo & Staplin, 2006).

In a 12-month study of the scope of polypharmacy, three-quarters of the participant elders were taking six or more prescribed drugs.

Q: What could have been done for Leona in our case scenario to avoid the overdose of polypharmacy and resultant hospitalization?

A: If you as the healthcare professional interacted with Leona, it would be helpful to ask for a list of her medications and what she knows about each one, including the over the counter (OTC) medications. Patients should be encouraged to know about all their medications—what they’re for and what adverse effects to watch for. For elders, a written list is helpful and can be created as easily as writing them on a note card for the patient to keep in their wallet or purse. Medic-Alert style bracelets should be encouraged, especially for diabetics.

Polypharmacy in an Aging Population [2:58]