Bioterrorism and Weapons of Mass Destruction

Bioterrorism and Weapons of Mass DestructionPage 3 of 8

The Federal Bureau of Investigation (FBI) uses a definition of terrorism that includes “the unlawful use of force and violence against persons or property to intimidate or coerce a government, the civilian population, or any segment thereof, in furtherance of political or social objectives” (28 C.F.R. Section 0.85).

From the Centers for Disease Control and Prevention (CDC) comes a comprehensive definition of bioterrorism:

A bioterrorism attack is the deliberate release of viruses, bacteria, or other germs (agents) used to cause illness or death in people, animals, or plants. These agents are typically found in nature, but it is possible that they could be changed to increase their ability to cause disease, make them resistant to current medicines, or to increase their ability to be spread into the environment. Biological agents can be spread through the air, through water, or in food. Terrorists may use biological agents because they can be extremely difficult to detect and do not cause illness for several hours to several days. Some bioterrorism agents, like the smallpox virus, can be spread from person to person and some, like anthrax, can not. (CDC, 2007).

While the use of violence lies at the heart of most definitions of terrorism, arriving at a more nuanced definition often depends on the political, ethnic, or religious perspective of those doing the defining. In addition, terrorism is sometimes categorized as either “domestic” or “international,” referring not to where the terrorist act takes place, but to the origin of the individuals or groups responsible for it. For healthcare professionals facing the medical consequences of such an act, this distinction may not seem particularly relevant.

There is much debate over the motivations for terrorism. They have traditionally been thought to reflect religious, political, or ideological beliefs, and the targets of attacks to be symbolic in some way. Sparking fear in victims and the wider public is often an element of motivation. Recent research suggests motivations may include a personal desire on the part of perpetrators to further their membership in the terrorist community and can be affected by various internal structural issues within terrorist groups (Abrahms, 2015, 2008). However, the bottom line for healthcare professionals is that debates over definitions, motivations, and other factors are not necessarily relevant to understanding how to care for victims of terrorist acts.

Terrorist acts have occurred throughout history, but after the Oklahoma City bombing in 1995 and the events of September 11, 2001 in the United States, such behavior became an ongoing element of the public consciousness. Acts of terrorism and the means by which they might be carried out are of special concern to healthcare professionals, who would be called upon to treat people following a terrorist attack. In fact, several states have mandated training for nurses and other healthcare professionals to ensure they have a basic knowledge of potential terrorist threats and how to respond to them. 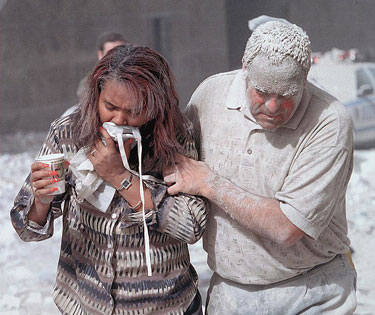 The effects of terrorist acts are not only physical, and fear may loom large among citizens. Healthcare workers need to be prepared to address this fear, even in patients who have sustained little or no physical injury. Additional psychological effects are recognized consequences of certain types of injuries and will be discussed in the sections that follow.

The U.S. government was already actively working to combat terrorist threats before September 11, 2001, and has since stepped up its efforts. For the general public and for healthcare workers, education about the proper responses to terrorist activities, along with thorough emergency preparedness, are the best available defense. Absent shocking new events close to home, it can be tempting to relegate emergency preparedness for terroristic events to the back of the mind, but all sorts of things can happen, both small and large, that would require quick thinking and proper training.

Events since 2001 have resulted in a large body of useful information and many resources for individuals and organizations seeking to educate and prepare themselves. The changing nature of the Internet means that some of these resources may come and go, but websites maintained by the Department of Homeland Security, the Department of Health and Human Services (DHHS), and the CDC remain up-to-date and valuable resources for individuals and institutions. (See Resources at the end of this course for relevant links.)

Weapons of mass destruction (WMD) is a term that has become increasingly familiar through its use in the media. Not everyone means precisely the same thing when they use the term, but the definition used by the U.S. military may be the simplest and most generally understood. WMD are:

The possibility that terrorists might resort to the use of WMD is of grave concern. The types of WMD vary in their ability to cause damage, in their ease of production and use, in the kinds of physical and human damage they can be expected to cause, and in their likelihood of use by terrorist organizations.

Chemical weapons use the toxic properties of chemicals to cause harm, up to and including death. Only a relatively small amount of a chemical agent is needed to produce significant physical and psychological effects. Historically, chemical weapons have been the most widely used and proliferated type of WMD, but they receive far less attention than do biological and nuclear weapons (NTI, 2015b).

Biological weapons utilize microorganisms and natural toxins to produce disease in humans, animals, or plants, and “gram for gram. . . are the deadliest weapons ever produced.” Derived from a variety of sources, these compounds, when paired with a delivery system, become weapons. The potential danger of a given weapon is measured by its lethality, or how effectively it kills; its infectivity, or how easily it spreads; and its virulence, or how likely it is to cause disease. Other important considerations include how easily is it dispersed, whether it can be treated medically, whether there is a vaccine, what dose is needed to cause disease, and how stable the compound is (NTI, 2015a).

Chemical and biological weapons are financially and logistically easier to acquire than radiologic or nuclear weapons. They will cause more casualties and have a greater psychological impact than conventional weapons, but cause less destruction than devices involving radiation. Chemical weapons are somewhat easier than other weapons for terrorist groups (or even individuals) to manufacture because the manufacturing knowledge is readily available, many precursor chemicals have legitimate uses and are thus legally available, there is poor security around these chemicals in some countries, and small chemical manufacturing equipment is commonly available.

Radiologic and nuclear weapons rely on the same sources for damage—explosive power and radiation—but there is a distinction in their forms. In addition, true nuclear weapons produce tremendous heat, which can cause burns and start fires. In the last fifty years, most radiation injuries have been the result of accidents; however, the intentional deployment of a nuclear or radiologic device is a potential terrorist threat.

Modern nuclear threats can be divided into five general categories:

Radiologic dispersal devices—commonly known as dirty bombs—are seen as more likely to be used by terrorists. These devices require little more skill than is needed to make a conventional bomb and their components are easier to acquire. RDDs utilize conventional explosives to disperse a radioactive material packaged in the device, as opposed to a nuclear device, which creates radiation with its explosion.

While it is unlikely that many people would die from radiation poisoning as a result of the explosion of an RDD, there would be some deaths and injuries and the costs of cleanup could be considerable. These devices are attractive to some groups because they are relatively easy to create and they will not generally do a great deal of damage, but they will play on the heightened fear of radiation among the general public to cause widespread panic and disruption, which is often a group’s real goal. Because of this, public education and good response preparation are important counter measures (CISAC, n.d.-a; NTI, 2015c,d; ORISE, 2013).

Nuclear weapons present significantly higher obstacles in terms of the skill needed to produce them and the financial and logistical support needed to acquire materials, prepare the device, and transport it (Weiss, 2015). However, the potential for damage, injuries, and death is much higher because they are significantly more powerful weapons.

Modern chemical warfare can be traced to World Wars I and II. Since then, there has been research and stockpiling of chemicals by many countries but mutual deterrence has generally prevailed. A modern exception was the use of chemical weapons in 2013 by Syrian president Bashar al-Assad against Syrian citizens who were rebelling against his autocratic government. Through intense negotiating, the United Nations was able to persuade Assad to allow outsiders to come into Syria and remove or destroy the chemical weapons he had stockpiled and by 2014 they had been reported destroyed or removed.

The techniques for making very destructive chemical weapons are well understood and the necessary equipment is commonly available. Once made, weapons can be easily concealed. In 1995 a Japanese cult group known as Aum Shinrikyo made and dispersed the nerve agent sarin several times in the Tokyo subway, killing twelve people on one occasion. These incidents made it clear that even small groups could manage the manufacture and dispersal of deadly chemical weapons (NTI, 2015b).