The Chain of InfectionPage 3 of 6

The very nature of healthcare settings makes them vulnerable to the spread of infections because they serve patients who are ill and are therefore susceptible hosts. Patients with altered immunity such as people with cancer or HIV/AIDS are at high risk for infection. Surgical patients are at risk because any incision creates a new portal of entry for pathogens. Elderly patients may have weakened immunity simply because of their age. Healthcare workers are themselves at risk of infection because of their close daily contact with patients who may harbor pathogens. Thus, infection control is a primary component of safe, effective patient care.

The spread of infection is best described as a chain with six links:

The Chain of Infection

Infection control measures are designed to break the links and thereby keep the infection from spreading.

The presence of bacteria in and on the human body is normal; these bacteria are called resident flora. For example, the large intestine is colonized with Escherichia coli. However, when E.coli (infectious agent) exits the gastrointestinal tract (reservoir) through the anus (portal of exit), it can spread to the urinary tract by indirect contact (mode of transmission in women—wiping from back to front) and cause a urinary tract infection (UTI). The urethra is the portal of entry. A simple way for a woman (susceptible host) to break the chain of infection is to wipe from front to back. Teaching patients this simple technique can help prevent urinary tract infections in the future.

Bacillus can refer to any rod-shaped bacterium, or can be more specific to Bacillus, which is a gram-positive and rod-shaped genus. Source: Zygote Media Group, Inc. Used with permission.

Pathogens include not only bacteria but also viruses, fungi, and parasites. The virulence of these pathogens depends on their number, their potency, their ability to enter and survive in the body, and the susceptibility of the host. For example, the smallpox virus is particularly virulent, infecting almost all people exposed. In contrast, the tuberculosis bacillus infects only a small number of people, usually people with weakened immune function, or those who are undernourished and living in crowded conditions.

Viruses are intracellular parasites; that is, they can only reproduce inside a living cell. Viruses such as HIV/AIDS, and Hepatitis B and C have the ability to enter and survive in the body for years before symptoms of disease occur. Other viruses, such as the influenza and SARS viruses, quickly announce their presence through characteristic symptoms.

Fungal infections are prevalent throughout the world but only a few cause disease in humans, and most commonly affect the skin, nails, and subcutaneous tissue. However, fungi such as Pneumocystis carinii can be life-threatening to the person with HIV/AIDS. 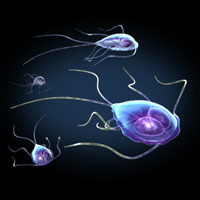 Protozoa parasites: giardia trophozoites in a variety of positions. Giardia stick closely to the lining of the small intestine in the hosts they infect and cause mild to severe diarrhea. Source: Zygote Media Group, Inc. Used with permission.

Parasites are organisms that infect and cause disease in animals. Protozoa, arthropods and helminths are all parasites. Protozoa are single-celled organisms transmitted via direct or indirect contact or an arthropod vector (an infected carrier). Arthropods include scabies (mites), lice, and fleas, which generally infest skin, causing inflammation and itching. Infestation occurs by direct contact with the arthropod or its eggs. Helminths include roundworms, tapeworms, and flukes. They infect humans principally through ingestion of fertilized eggs or when the larvae penetrate the skin or mucous membranes.

A reservoir is any person, animal, arthropod, plant, soil or substance (or combination of these) in which an infectious agent normally lives and multiplies, on which it depends primarily for survival, and where it reproduces itself in such manner that it can be transmitted to a susceptible host.

Humans are the most common reservoirs of pathogens that can infect themselves (see E. coli example above) and others. The following table summarizes the human reservoirs and methods of transmission of common infectious agents.

Portals of exit from the human reservoir include:

Once a pathogen has exited the reservoir, it needs a mode of transmission to the host through a receptive portal of entry. Transmission can be by direct or indirect contact or through airborne transmission.

Direct contact is person-to-person transmission of pathogens through touching, biting, kissing or sexual intercourse. Spread of airborne droplets is also a form of direct contact but only if the host is within 3 feet of the reservoir. Sneezing, coughing, spitting, talking or singing can transmit droplets into the eyes, nose, or mouth of the host.

Indirect contact includes both vehicle-borne and vector borne contact. A vehicle is an inanimate go-between, an intermediary between the portal of exit from the reservoir and the portal of entry to the host. Inanimate objects such as cooking or eating utensils, handkerchiefs and tissues, soiled laundry, doorknobs and handles, surgical instruments and dressings, are common vehicles that can transmit infection. Blood, serum, plasma, water, food, and milk also serve as vehicles. For example, food can be contaminated by E.coli if food handlers do not practice appropriate handwashing techniques after using the bathroom. If the food is eaten by a susceptible host, such as a young child or a person with HIV/AIDS, the resulting infection can be life-threatening.

Vector-borne contact is transmission by an animate intermediary, an animal, insect or parasite that transports the pathogen from reservoir to host. Transmission takes place when the vector injects salivary fluid by biting the host, or deposits feces or eggs in a break in the skin. Mosquitoes are vectors for malaria and West Nile virus. Rodents can be vectors for hanta virus.

Airborne transmission occurs when the environmental pathogens (Legionella spp.) or residue of evaporated droplets from an infected person (e.g., Mycobacterium tuberculosis) remains in the air long enough to be transmitted to the respiratory tract of a susceptible host.

Infectious agents get into the body through various portals of entry, including the mucous membranes, non-intact skin, and the respiratory, gastrointestinal and genitourinary tracts. Pathogens often enter the body of the host through the same route they exited the reservoir, e.g., airborne pathogens from one person's sneeze can enter through the nose of another person.

The skin normally serves as a barrier to infection. However, any break in the skin, intentional or unintentional, invites the entrance of pathogens. Percutaneous injury, surgical incision, vascular access, and use of invasive devices all afford a portal of entry.

The immune system is a complex network of cells, tissues and organs that interact to defend the body against infections. Defense mechanisms can be nonspecific or specific and include the inflammatory response, humoral (circulating) immunity, and cell-mediated immunity.

The inflammatory response is a local, nonspecific immune response of the tissues to infection or injury. This response aims to destroy or dilute the injurious agent, prevent spread of the injury, and promote tissue repair. The five characteristics of an inflammatory process are:

The very young and the very old are also at risk for compromised immune function. Infections are a major cause of death among newborns. Although babies receive certain temporary immunities from their mothers through the placenta and in breast milk, their immune systems are still developing, making them vulnerable to infection. Aging also compromises immune function, particularly in those who are hospitalized or in nursing homes. Nutritional status is a key factor in immune function.

People with chronic disease may also be immune-compromised. People with diabetes mellitus or peripheral vascular disease are at high risk for infection because of impaired circulation. Medications can also impair immunity. For example, cancer drugs, anti-inflammatory medications such as corticosteroids, and certain antibiotics can interfere with normal immune function.

Diagnostic or therapeutic procedures that involve an invasive device such as a urinary catheter or a chest tube also increase the risk of infection. Caring for patients with these devices demands strict attention to infection control standards and continuous monitoring for any sign of infection or inflammation.

Environmental factors can also affect the outcome of an exposure, particularly in the case of immune compromised patients. Contamination of the environment can occur through inadequate handwashing, improper waste disposal, inappropriate handling of laundry, or inadequate cleaning and disinfection of patient articles and patient rooms. Water supplies may become contaminated by environmental pathogens such as Aspergillus spp. and Legionella spp., which then become airborne. Inadequate air exchange can allow pathogens such as Mycobacterium tuberculosis and varicella-zoster virus to contaminate air supplies. Appropriate environmental infection-control measures and engineering controls can effectively prevent these infections.

Contamination of equipment with blood or other body substances can occur during almost any caregiving procedure. Invasive procedures such as venipuncture, surgery, or insertion or removal of a catheter or other device carry a high risk of contaminating care providers and patients. Equipment can also become contaminated with airborne or waterborne pathogens. This can have life-threatening implications for seriously ill or immune-compromised patients, for example, those undergoing dialysis.