Nurses provide front-line healthcare for older adults in a wide variety of settings, including preventive care in primary care offices and in the community, acute care in hospitals, and long-term care in nursing homes and assisted living facilities.

As we grow older, our bodies and our minds can be affected by a variety of age-related changes and conditions. Medical conditions that were minor or relatively easy to deal with when we were in our thirties and forties may become progressively more challenging in our seventies, eighties, and beyond, necessitating changes in medical care, diet, and exercise, and often affecting our sleep.

Age-related changes cover a complex of issues—physical, mental, and social—occurring simultaneously and affecting one another. Many kinds of programs and organizations exist to support aging people and those who care for them at the federal, state, and local levels. As our elder population increases, these programs and organizations will be increasingly important, as will the role of innovation and research. Nursing science plays a critical role by building evidence to inform and improve both clinical care and quality of life for older adults (Grady, 2011).

According to the Administration on Aging (AOA) (part of the U.S. Department of Health and Human Services), the older population—those 65 and older—was 46.2 million in 2014. That’s 14.5% of the U.S. population, or 1 in 7 Americans. That population is expected to be 98 million by 2060, more than twice as many as today (see below). 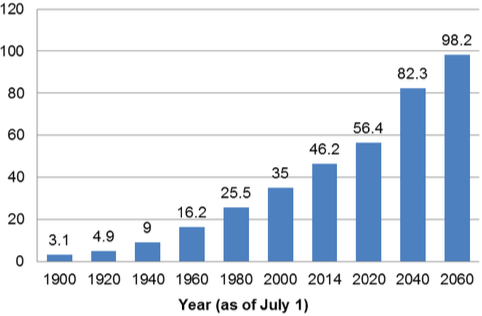 In 2014, 22% of the older population were members of racial or ethnic minority populations. People of Hispanic origin (who may be of any race) represented 8% of the older population, and non-Hispanic minorities an additional 14%, including African-Americans (9%), Asian or Pacific Islander (4%), Native American (0.5%), and Native Hawaiian/Pacific Islander (0.1%). In addition, 0.7% of people 65 and older identified themselves as being of two or more races. (AOA, 2015).

The proportion of older people in the population varies considerably by state, with some states experiencing much greater growth in their older populations. In 2014 almost two-thirds (63%) of people 65 and older lived in just 14 states, and Texas is number 3 with 3.1 million, behind only California at 5 million and Florida at 3.8 million (AOA, 2015).