Parkinson’s disease (PD) is caused by ongoing loss of dopamine-secreting neurons and the associated deficiency of dopamine in the brain’s striatum, which is responsible for coordinating movement and balance. Parkinson’s is the second most common neurodegenerative disease, behind Alzheimer’s disease. PD affects 1% of those above 55 years old, and more than 3% of those over 75 years old. Some studies seem to indicate that PD occurs less often in African Americans and Asian Americans than in Caucasians.

On histopathology tissue slides at autopsy, PD is characterized by aggregation of the protein alpha-synuclein into clumps (Lewy bodies) in the neurons. This correlates with a loss of dopamine production in the neurons of the substantia nigra within the midbrain. The basal ganglia, innervated by the dopaminergic system, are the most seriously affected brain areas in PD. Cell death in the substantia nigra and the ventral (front) part of the pars compacta can affect almost all of the neurons by the time of patient death. 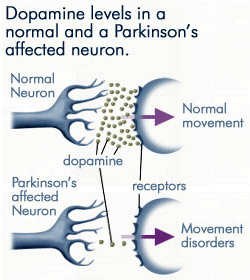 Lewy bodies usually are found in the sporadic, idiopathic disorder, and their distribution throughout the affected brain varies substantially, although the density of occurrence of Lewy bodies is often reflective of the level of symptoms and severity in PD patients. In the rapidly induced parkinsonism discussed below, however, Lewy bodies are not present, though all of the other symptoms of PD do occur. This leads to the notion that Lewy bodies are not a causative factor of declining function, but instead an indicator of declining function over time.

Some interesting clues as to the causes and development of PD arose in 1982 from the biologic responses to contaminated opiate that involved exposure to the chemical MPTP (1-methyl-4-phenyl-1,2,3,6-tetrahydropyridine). A synthetic neurotoxin, MPTP is a precursor molecule that can cross into the brain and be metabolized to the toxic chemical MPP+ (1-methyl-4-phenylpyridinium). This conversion and toxicity in the brain can interfere with oxidative phosphorylation in mitochondria, the major chemical process that generates adenosine triphosphate (ATP) and energy for the cell. Inhibition of this pathway results in cell death (Martinez & Greenamyre, 2012).

This was evidenced quite starkly in the 1982 California incident when heroin addicts in their twenties and thirties were affected by a batch of a synthetic opiate contaminated with MPTP that unfortunately led to acquired symptoms of irreversible parkinsonism within days for all who took the drug.

This clinical case happened several years after a similar case in Maryland, where MPTP had been found as a contaminant in another opiate synthesis and the chemist who illicitly produced the drug also became parkinsonian. The Santa Clara neurologist J. William Langston, in collaboration with the National Institutes of Health (NIH), tracked down MPTP as the cause and documented the case in his 1995 book The Case of the Frozen Addicts, which was later featured in two NOVA productions by PBS.

The MPP+ chemical rapidly causes permanent clinical symptoms very similar to those of PD, with a high affinity and selective damage to the dopaminergic neurons in the substantia nigra of the brain. This implies that exposure to some types of chemicals over a lifetime may be involved in the development of idiopathic PD. Some pesticides (rotenone) and herbicides (paraquat, agent orange) have been correlated with an increased risk of developing PD in humans. The chloride version of MPP+ has been used as a herbicide under the trade name cyperquat; it is structurally similar to paraquat, which is sometimes used to kill illegal marijuana fields and is particularly dangerous if smoked.

MPTP as well as the herbicide paraquat and the pesticide rotenone are selective complex-I inhibitors of ATP production in the mitochondrial membrane and induce dopamine depletion and PD in animal studies. This correlates with the finding of complex I mitochondrial defects in the substantia nigra of patients with sporadic PD.

Dopaminergic nerve cell bodies in the substantia nigra tend to be pigmented due to the presence of melanin. It is posited that the toxic chemicals such as MPTP and rotenone have a higher binding affinity to the cells with this pigment, leading to their selective death and resulting PD.

Welding and exposure to heavy metals such as iron, manganese, copper, lead, amalgam, aluminum, or zinc have also been hypothesized to increase the risk of PD through the accumulation of metals in the substantia nigra and increased oxidative stress. Some reports have been published, but epidemiological evidence for an association between metal exposure and risk of PD is not yet conclusive.

Living in agricultural environments has been correlated with an increased the risk of PD, presumably due to exposure to these agents over time. Clearly any agents or injuries that accelerate damage and loss of the dopamine producing neurons of the substantia nigra are critical to development of parkinsonism and its related symptoms.

As discussed above, certain chemicals can induce parkinsonism that mimics most of the symptoms of PD. Additionally, lifetime exposure to head traumas has been correlated to parkinsonism. This is most notable among former boxers and others who have suffered numerous traumatic brain injuries or other repetitive trauma. Each of these patient histories may involve mitochondrial dysfunction as an underlying cause of cell stress and death, leading to eventual PD symptoms.