Parkinson’s disease is one of the most common neurologic disorders of older adults. The most common symptoms of PD include tremor, stiffness, poor balance even while seated, bradykinesia (slowed movement), and rigidity of the muscles. Walking may involve a festinating gait, in which the patient involuntarily moves with short, shuffling, accelerating steps, often on tiptoe, with the trunk flexed forward and the legs flexed stiffly at the hips and knees. Other symptoms may include fatigue, soft speech, writing problems, stooped posture, constipation, and sleep disturbance.

Front and side views of a man with a festinating gait characteristic of Parkinson’s disease. Drawing after St. Leger, first published in Wm. Richard Gowers’ Diseases of the Nervous System, in London, 1886. Source: Wikipedia.

Diagnosis of clinical PD is made by observation of the characteristic symptoms. The tentative diagnosis can be confirmed by a regimen of levodopa that results in relief of motor impairment, especially if initial early symptoms occurred on one side. Presence of resting tremor, asymmetric onset of symptoms, and response to levodopa or similar agents are currently the best confirmation, if no other unusual symptoms are present; nevertheless, a variety of tests and brain scans should be done to rule out other causes or explanations of symptoms. The progress of the illness over time may reveal that it is not Parkinson’s disease, so any diagnosis should be reviewed periodically (Brunton et al., 2011).

Onset of PD is gradual and slowly increases in intensity. It often begins with a coarse tremor in one hand while it is at rest, but the tremor is diminished when a purposeful move is initiated or is absent at night while sleeping. The tremor may progress to the other hand, arms, legs, jaws, and face. For some patients, the tremor becomes less pronounced with time, and for some it never becomes a major feature of PD.

Parkinson’s disease is classically a movement disorder with dystonia, where sustained muscle contractions cause twisting and repetitive movements or abnormal postures. Problems often develop with walking, and facial expressions become less active or expressive. Muscles of the limbs can tighten, restricting free and fluid motion. Muscles of the hands are less responsive, so daily activities become more difficult, as does handwriting. Often, taking a first step is difficult and, as noted earlier, walking motion resembles a shuffling motion, with little or no arm swinging and a characteristic stooped posture. With reduced flexibility, control, balance, and reaction, falling becomes more of a danger in later stages.

Parkinson’s disease usually exhibits the presence of Lewy bodies in the brain cells, whereas Alzheimer’s disease shows accumulation of tau protein in the brain with extracellular neurofibrillary tangles; however, dementia along with neurofibrillary tangles often occurs in advanced stages of PD. A person with PD has 2 to 6 times the risk of suffering dementia compared to the general population, and the chances increase with a lengthy duration of the disease. Dementia is associated with a reduced quality of life for people with PD and their caregivers, increased mortality, and a high likelihood of nursing home care.

Parkinson plus diseases are parkinsonisms with additional clinical disabilities that usually respond poorly to levodopa and can seem to degenerate relatively rapidly when compared to PD. These related diseases include multiple system atrophy, progressive supranuclear palsy, corticobasal degeneration (CBD) and dementia with Lewy bodies (DLB). Antiparkinson medications are usually less effective at controlling symptoms in Parkinson plus syndromes. In addition, faster progression rates, early cognitive dysfunction or postural instability, minimal tremor, or symmetry at onset may indicate a Parkinson plus disease rather than PD itself. Genetic forms are usually classified as PD, although the terms familial Parkinson’s disease and familial parkinsonism are used for disease entities with an autosomal dominant or recessive pattern of inheritance (see earlier discussion).

Dementia with Lewy bodies (DLB) is another synucleinopathy that has similarities with PD, and especially with the subset of PD cases with dementia. Usually DLB exhibits dementia symptoms much earlier though, maybe even concurrent with the first movement symptoms, whereas PD shows a much longer time to progression of dementia (>1 year).

There are several non-motor types of symptoms that are common for PD, such as sensory deficits, cognitive difficulties, or sleep problems. Behavior and mood alterations often include depression, apathy, and anxiety. Impulse control behaviors such as medication overuse, binge eating, hypersexuality, or pathological gambling can appear in PD and have been related to the long exposure to dopamine replacement therapy. Psychotic symptoms such as hallucinations or delusions occur in 4% of patients, most likely from side effects of levodopa treatment, and more common with increasing age and net levodopa intake.

Medical organizations have created diagnostic criteria to ease and standardize the diagnostic process, especially in the early stages of the disease. The criteria require slowness of movement (bradykinesia) plus either rigidity, resting tremor, or postural instability. Other possible causes for these symptoms need to be ruled out. Finally, three or more of the following features are required during onset or evolution: unilateral onset, tremor at rest, progression in time, asymmetry of motor symptoms, response to levodopa for at least five years, clinical course of at least ten years, and appearance of dyskinesias induced by the intake of excessive levodopa over time.

Computed tomography (CT) and magnetic resonance imaging (MRI) brain scans of people with PD usually appear normal. These techniques are, however, useful to rule out other diseases such as basal ganglia tumors, vascular pathology, and hydrocephalus. A specific technique of MRI, diffusion MRI, has been reported to be useful at discriminating between typical and atypical parkinsonism, although its exact diagnostic value is still under investigation.

Dopaminergic function in the basal ganglia can be measured with PET and SPECT radiotracers. Examples for SPECT are ioflupane 123I (trade name DaTSCAN) and iometopane (Dopascan); for PET, fluorodeoxyglucose (18F). The DaTSCAN technique has the potential to predict the course of the disease for patients. By measuring the number of dopamine DAT transporters when compared to normal levels at an early point of PD, there is predictive value in how advanced the disease will be in 5 years. Generally a pattern of reduced dopaminergic activity in the basal ganglia can aid in diagnosing PD (Cummings et al., 2011).

Fluorodopa, also known as FDOPA, is a fluorinated form of (18F) L-DOPA primarily synthesized as a radiotracer for PET. Current studies employing the use of FDOPA PET scanning have focused on analyzing the efficiency of neurons in the striatum that utilize the neurotransmitter dopamine. This characteristic is useful in distinguishing corticobasal degeneration CBD from the similar PD, as individuals diagnosed with PD were more likely to have a lower uptake of dopamine than patients with CBD. As these noninvasive imaging techniques are improved, it is possible that therapeutic treatments can be followed more closely in time to demonstrate efficacy for individual patients. 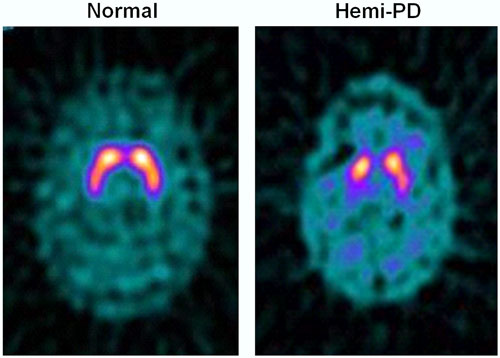 With new developments in preclinical studies, a recent technique has been devised to look inside living cells in tissue culture and see the insoluble fibrillar deposits associated with Parkinson’s disease. A molecular probe was designed based on the metallic element ruthenium. Testing it inside live neuroglioma cells, the color probe binds to misfolded alpha-synuclein proteins that clump together and form fibrils that disrupt the cell’s functions (Lewy bodies). The ruthenium complex lit up as a red color when triggered by a laser, but only when it was bound to the fibril, allowing alpha-synuclein aggregation to be tracked using photoluminescence spectroscopy. A molecular detector like this can be used to monitor the formation of aggregates inside live cells while screening for drugs that break up fibrils or prevent them from ever forming. The ruthenium complex itself has no therapeutic benefit at this time (Cook et al., 2012).