Brain disease comes in many different forms and has many different causes. Because the brain is so important, any damage to the brain can have a profound impact on our ability to manage daily affairs, communicate effectively, and live independently.

Dementia is a syndrome, a collection or grouping of symptoms—the result of progressive deterioration and loss of brain cells and brain mass. Different types of dementia affect different parts of the brain. Some dementias start in a part of the brain that controls a specific function such as short-term memory or emotion. Other dementias affect the entire brain—or more than one part of the brain—causing other symptoms.

In all, nearly twenty different types of non-Alzheimer’s dementia have been identified. Determining if someone has dementia is important because some types of cognitive decline may be treatable or even reversible if the underlying cause is identified and treated (Sönke, 2013).

Alzheimer’s disease (AD) is an irreversible, progressive, age-related brain disorder that affects as many as 5 million Americans age 65 and older. It is the most common type of dementia and is responsible for 60-80% of all cases. Worldwide, more than 50 million people live with dementia and because people are living longer this number is expected to triple by 2050 (ADI, 2019).

Worldwide more than 50 million people live with dementia and this number is expected to double by 2030 and triple by 2050.

The exact cause of Alzheimer’s dementia is still unknown. In Alzheimer’s disease, and likely in other forms of dementia, damage within the brain is thought to be due to the formation of beta-amyloid plaques, the formation of neurofibrillary tangles, and degeneration neurons in the cerebrum.

Brain imaging techniques such as MRIs as well as autopsies show that Alzheimer’s causes the brain to shrink, that connections between nerves weaken and nerve cells are damaged and lost. Once a healthy nerve cell begins to deteriorate, it loses its ability to communicate with other neurons, with devastating results.

Left: A healthy neuron with many connections to other cells. Right: A dying nerve cell showing the nerve connections weakening and the main body of the cell deteriorating due to the presence of amyloid plaques and tau tangles. Source: Image courtesy of the National Institute on Aging/National Institutes of Health.

In Alzheimer’s, the progressive brain damage attributed to the formation of unwanted beta-amyloid plaques and neurofibrillary tangles is illustrated in the drawings below, which show the formation and spread of plaques and tangles (in blue). The blue areas represent damaged and dying nerve cells.

In Alzheimer’s disease, plaques and tangles first appear in an area of the temporal lobe called the hippocampus, where new memories are formed (A). As the disease progresses, plaques and tangles spread to the front part of the brain, affecting judgment and other high-level cognitive functions; symptoms begin to be obvious at this stage (B). In the severe stage (C), plaques and tangles are found throughout the brain. Damage eventually affects memory, emotions, communication, spatial awareness, safety awareness, logical thinking, recognition of loved ones, and the ability to care for oneself.

Vascular dementia is one of the most common forms of dementia after Alzheimer’s disease, thought to be the cause of approximately 20-30% of the dementia cases worldwide (ADI, 2019). Vascular dementia usually has a stepwise onset, meaning symptoms can stay the same for a long period of time, then suddenly worsen. Memory may be less affected than in Alzheimer’s disease while fluctuations in mood are more common. Cognitive impairment is often “patchy” because of small vessel damage throughout the brain.

Vascular dementia is a general term used to describe changes in cognition resulting from impaired blood flow to the brain. It can be caused by a stroke or a series of small strokes or any condition that causes brain damage or reduces blood flow to the brain. Generally, vascular dementia doesn’t affect memory as much (or in the same way) as Alzheimer’s, at least in its early stage. Symptoms are related to the part of the brain experiencing reduced blood flow.

Risk factors for developing vascular dementia include diseases or disorders that damage the vessels supplying blood to the brain. The risk of developing dementia from vascular damage can be significant even when individuals have suffered only small strokes or minor damage to the blood vessels (NINDS, 2020). Risk factors associated with vascular dementia include hypertension, heart rhythm irregularities, diabetes, high cholesterol, smoking, sleep-disordered breathing, and a sedentary lifestyle (UCSF, 2020).

Frontotemporal dementia begins in the frontal and temporal lobes of the brain. It is believed to start at an earlier age than Alzheimer’s disease and is a relatively common type of dementia in those under the age of 60. New research, however, is showing that frontotemporal dementia can start in older age. It is thought to be responsible for 5-10% of all cases of dementia (although its prevalence is likely underestimated). There is no single pathology attributed to frontal-temporal dementia—it is considered a “family” of neurodegenerative disorders.

Behavioral and personality changes associated with frontal-temporal dementia can be striking. This is because the frontal lobes are responsible for many of the traits and behaviors that mediate human behaviors. Damage to this part of the brain can lead to mood swings, disinhibition, inappropriate touching, loss of social decorum, loss of empathy in addition to language difficulties and problems with spatial orientation. 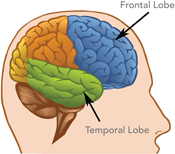 Dementia with Lewy bodies (DLB) is another common type of progressive dementia. It accounts for up to 20-30% of all autopsy-confirmed dementias in older adults (Vermeiren et al., 2015).

DLB is caused by the build-up of abnormal proteins called Lewy bodies inside nerve cells in areas of the brain responsible for certain aspects of memory and motor control. It is not known exactly why Lewy bodies form or how Lewy bodies cause the symptoms of dementia (NINDS, 2019).

The similarity of symptoms between dementia with Lewy bodies, Parkinson’s disease, and Alzheimer’s disease can make diagnosis difficult. It is possible that either Lewy body dementia is related to these other causes of dementia or that an individual can have more than one type of dementia at the same time. Lewy body dementia usually occurs in people with no known family history of the disease. However, rare familial cases have occasionally been reported (NINDS, 2019).

Although Parkinson’s disease is initially associated with progressive difficulties with movement (slowed movement, postural instability, resting tremors), about 80% of people with Parkinson’s disease will eventually experience behavioral and cognitive changes. Symptoms are mild in the early course of the disease, then progressively worsen. This condition is closely related to Lewy body dementia—both diseases are caused by the build-up of alpha-synuclein proteins, which clump together, causing damage to nerve cells in the brain.

Functional impairments associated with dementia with Lewy bodies include progressive cognitive decline, “fluctuations” in alertness and attention, visual hallucinations, and parkinsonian motor symptoms, such as slowness of movement, difficulty walking, or rigidity (stiffness) (NINDS, 2019). Nearly half of those with DLB also suffer from depression (Vermeiren et al., 2015).

Difficulty sleeping, loss of smell, and visual hallucinations can precede movement and other problems by as long as 10 years. Because of this, DLB can go unrecognized or be misdiagnosed as a psychiatric disorder until its later stages (NINDS, 2020).

Functional impairments associated with Parkinson’s disease dementia include the onset of Parkinson-related movement symptoms followed by mild cognitive impairment and sleep disorders, which involves frequent vivid nightmares and visual hallucinations (NINDS, 2020). Cognitive issues such as impaired memory, lack of social judgment, language difficulties, and deficits in reasoning can develop over time. Autopsy studies show that people with Parkinson’s dementia often have amyloid plaques and tau tangles similar to those found in people with Alzheimer’s disease, though it is not understood what these similarities mean.