1. Abuse and Misuse of Prescription Drugs

Two decades ago a trend arose in which there was little question about using opioids to treat acute and chronic pain. Although opioid use was mostly well intentioned, individual consequences have been serious: it initiated a dramatic increase in dependence, addiction, and overdose, as well as lesser known side effects such as neonatal abstinence syndrome and transmission of infectious diseases. Society has suffered loss of productivity, increased crime and violence, neglect of children, and expanded healthcare costs.

Prescribing opioids for acute and chronic pain (and diversion of prescription pain medications) has become so widespread that nearly one hundred thirty people per day, or fifty thousand per year, die from opioid overdose. The availability of narcotic-reversal drugs such as Narcan (naloxone) has helped but has not stopped the epidemic of opioid deaths.

COVID: A Crisis Within a Crisis

Unfortunately, the COVID pandemic has only made matters worse, causing what some call “a crisis within a crisis.” More than forty states have reported increased opioid deaths since the beginning of the coronavirus pandemic (Desmon, 2020).

The United States, in the twelve months ending in May 2020, experienced the highest number of overdose deaths ever recorded in a 12-month period. While overdose deaths were already increasing in the months preceding the COVID-19 pandemic, the latest numbers suggest an acceleration of overdose deaths during the pandemic (CDC, 2020, December 17).

Data from CDC released at the beginning of 2021 has confirmed this spike in overdose deaths. From June 1919 to June 2020, drug overdose deaths increased by more than 20%. During that time period, New Jersey experienced an increase of almost 9% (NCHS, 2021).

People with a substance use disorder may be more susceptible to COVID due to the many healthcare challenges faced by this population. It may be more difficult to find medical care due to inequities and stigma, and many people have medical and psychiatric comorbid conditions. Lung function may be diminished, especially for those who use methamphetamine, vape, or smoke cigarette or marijuana. A high percentage of individuals with substance use disorder experience homelessness and are exposed to increased transmission of COVID-19 in homeless shelters and prisons (Volkow, 2020).

Over the last two decades, several factors have contributed to the opioid crisis:

The introduction of pain as the fifth vital sign, by the American Pain Society in 1995, the Veteran’s Health Administration in 1999, and by The Joint Commission in 2001, overemphasized pain as a quantifiable measure. The intent was to ensure that pain is measured and treated (Bernard et al., 2018).

Perceptions of undertreatment led to increased use of opioids, at first for cancer-related pain and later for noncancer pain. The increased use was related to exaggerated claims in the medical literature (and by the pharmaceutical industry) of a lack of addiction—claims that were subsequently found to be false and deliberatively deceptive (Bernard et al., 2018).

As a result, an epidemic of opioid prescribing began in the 1990s, resulting in an alarming rise in opioid deaths. This has led to efforts to decrease use, both in patients with noncancer conditions as well as those with cancer and the survivors of cancer (Bernard et al., 2018).

Evidence slowly emerged about the harm associated with the use of opioids for pain management but prescriptions for opioids nevertheless gradually increased, and then exploded. The influence of the pharmaceutical industry has been described a “pervasive” by some researchers (Spithoff et al., 2020).

In one particularly egregious example, in the late 1990s, Purdue Pharma began aggressively marketing Oxycontin (oxycodone) for chronic non-cancer pain through academic detailing* and education sessions for physicians. Other pharmaceutical companies followed suit. These activities have been linked to the rise in opioid prescriptions (Spithoff et al., 2020).

*Academic detailing: Peer-to-peer educational outreach that has its roots in pharmaceutical detailing and was designed to improve prescribing practices by physicians.

There is evidence that the pharmaceutical industry may have influenced physicians’ clinical practice guidelines. Organizations that produced the guidelines failed to regularly employ mechanisms—such as appointing a methodologist in a lead role or conducting an external review—to mitigate potential bias from industry involvement (Spithoff et al., 2020). Purdue also provided financial support to the American Pain Society, the American Academy of Pain Medicine, the Federation of State Medical Boards, The Joint Commission, pain patient groups, and other organizations (Lopez, 2018).

Some researchers involved with the development of guidelines either did not report—or accurately report—funding sources for the sponsoring organization and conflicts-of-interest for individuals. One top cancer researcher consistently failed to disclose millions in payments, although accurate disclosure was the accepted standard during that time. Reasons that individuals and organizations do not declare conflicts of interest have been poorly studied but may include: not understanding what to declare, believing that a conflict is irrelevant, and worrying about reducing trust in the guideline user (Spithoff et al., 2020).

The year 2020 saw the largest ever settlement by a pharmaceuticals company for its role in fueling the opioid crisis. Purdue Pharma pleaded guilty on November 24 to felony charges that included paying illegal kickbacks to physicians who prescribed unnecessary or excessive doses of the drug. As part of the settlement, Purdue Pharma agreed to pay $8 billion to the United States, and to dissolve the business and form a public benefit corporation that would continue manufacturing drugs but steer profits from future opioid sales toward programs aimed at alleviating the addiction crisis (Desmon, 2020).

The third wave began in 2013, with significant increases in overdose deaths involving synthetic opioids, particularly those containing illicitly manufactured fentanyl. The market for illicit fentanyl continues to change, and it can be found in combination with heroin, counterfeit pills, and cocaine (CDC, 2020, March 19).

3 Waves of the Rise in Opioid Overdose Deaths 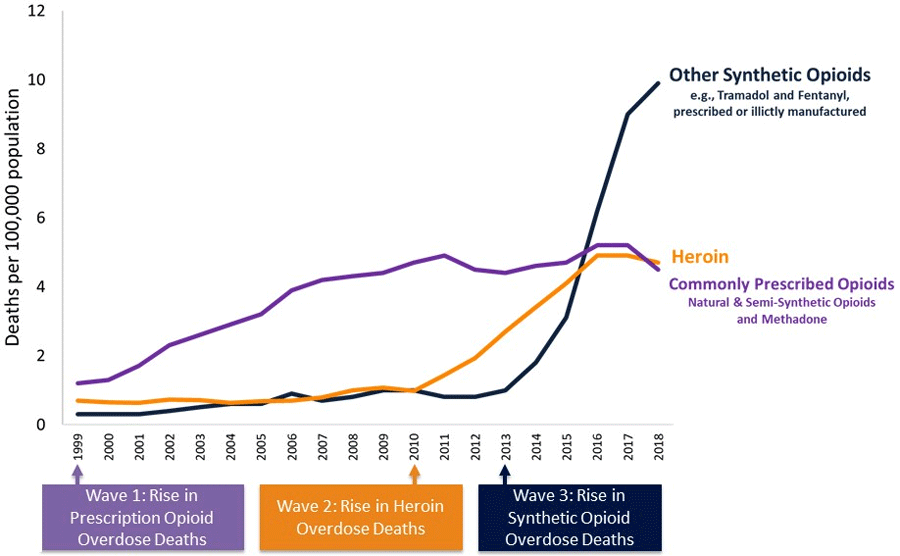 Illicit designer drugs have been particularly difficult to identify and track. Amateur and professional chemists can quickly reproduce a drug, alter its potency, and flood the market with modified compounds undetectable by most known tests. Little is known about the effects of these drugs because their chemical structures are modified so rapidly and so often that it is impossible for researchers and law enforcement to keep up with the changes.