The exact cause of dementia is still unknown. In Alzheimer’s disease, and likely in other forms of dementia, damage within the brain is related to a so-called pathological triad: (1) formation of beta-amyloid plaques; (2) disruption of a protein called tau leading to the formation of neurofibrillary tangles; and (3) degeneration of cerebral neurons (Lobello et al., 2012). These processes are clearly explained in the following video.

Inside the Brain: Unraveling the Mystery of Alzheimer’s

Diagnosis of Alzheimer’s disease and other types of dementia is based on symptoms; no test or technique that can diagnose dementia. To guide clinicians, the National Institute on Aging and the Alzheimer’s Association (NIA-AA) has developed the following diagnostic guidelines indicating the presence Alzheimer’s disease:

Neuroimaging shows promise is assisting with early diagnosis of Alzheimer’s disease by detecting visible, abnormal structural and functional changes in the brain (Fraga et al., 2013). Magnetic resonance imaging (MRI) can provide information about the shape, position, and volume of the brain tissue. It is being used to detect brain shrinkage, which is likely the result of excessive nerve death. Positron emission tomography (PET) is being used to detect the presence of beta amyloid plaques in the brain. 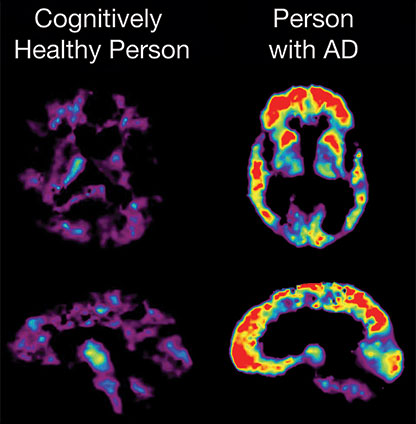 PET imaging makes it possible to detect beta amyloid plaques using a radiolabeled compound called Pittsburgh Compound B (PiB). In this PET scan, the red and yellow colors indicate that PiB uptake is higher in the brain of the person with AD than in the cognitively healthy person. Source: NIA, public domain.

Delirium is a sudden, severe confusion with rapid changes in brain function. Delirium develops over hours or days and is temporary and reversible. Delirium can affect perception, mood, cognition, and attention. The most common causes of delirium in people with dementia are medication side effects, hypo or hyperglycemia, fecal impactions, urinary retention, electrolyte disorders and dehydration, infection, stress, and metabolic changes. An unfamiliar environment, injury, or severe pain can also cause delirium.

Depression is a common but serious mood disorder. Major depressive disorder is characterized by a combination of symptoms that interfere with a person’s ability to work, sleep, study, eat, and enjoy activities. Some people may experience only a single episode within their lifetime, but more often a person may have multiple episodes (NIMH, 2016).

Persistent depressive disorder, or dysthymia, is characterized by longterm (2 years or longer) symptoms that may not be severe enough to disable a person but can prevent normal functioning or feeling well. Psychotic depression occurs when a person has severe depression plus some form of psychosis, such as delusions or hallucinations. Psychotic symptoms typically have a depressive “theme,” such as delusions of guilt, poverty, or illness (NIMH, 2016).

Depression is very common in people with dementia. Almost one-third of longterm care residents have depressive symptoms and about 10% meet criteria for a current diagnosis of major depressive disorder. Despite this awareness, depression is undertreated in people with dementia. Depressive illness is associated with increased mortality, risk of chronic disease, and higher levels of supported care (Jordan et al., 2014).