Florida: Laws and Rules of Nursing

FL: Laws and Rules of NursingPage 3 of 10

1. The History of Nurse Practice Acts

Before 1900 no state had a nurse practice act and nurses were neither registered nor licensed. In fact, until the ratification of the Nineteenth Amendment to the U.S. Constitution in 1920, women were not allowed to vote. The vast majority of working nurses had no formal education and most worked in unregulated, crowded workplaces or as private nurses in homecare settings.

Although the first hospital in North America was established by the Spanish in St. Augustine in 1597 (Florida Memory, n.d.), by the 1800s medical training in Florida and throughout the United States was still largely through apprenticeships. Folk medicine, homeopathy, herbal medicine, and midwifery predominated. Midwives, mostly African American women, provided much of the medical care, particularly maternity care, in impoverished and isolated rural communities throughout the South (Florida Memory, n.d.).

The American Civil War (1861–1865) had a profound effect on the development of the nursing and medical professions and in many ways laid the foundation for modern nursing. Around the time of the Civil War there were only about 150 hospitals in the United States, and there were no formal schools of nursing, no nursing credentials, and no “trained” nurses (Egenes, 2009). In England, Florence Nightingale had only just succeeded in establishing the first professional nurse training school in the world at St. Thomas’ Hospital in London with the first class starting on July 9, 1860.

The hundreds of thousands of casualties during the U.S. Civil War created a need for caregivers and tens of thousands of women offered their services, mostly on a volunteer basis. In 1861, responding to the strong opposition to female volunteers, Dorothea Dix organized a march on Washington demanding that women be allowed to treat Union soldiers. She was quickly put in charge of nurses assigned to the U.S. Army.

Dix initially required nurses to be over 30 years of age, “plain looking” and without curls, and forbade them to wear anything except brown or black clothing without ornaments, jewelry, or hoops. The age requirement was soon dropped as the number of wounded soldiers began to overwhelm the medical system. It is estimated that 3,000 nurses served in the war (Egenes, 2009), although as many as 30,000 women worked as volunteers.

Nurse with Wounded Men after the Battle of Nashville, 1864 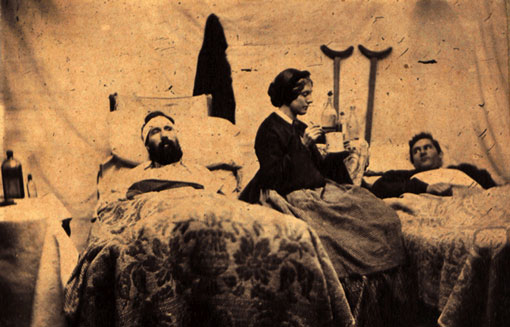 In the beginning, nurse volunteers were inexperienced, untrained, and disorganized. In 1867 Jane Currie Blaikie Hoge (The Boys in Blue, or Heroes of the “Rank and File”) stated:

The system was an untried experiment, and was suspiciously watched and severely criticized. Unfortunate failures were magnified and widely circulated. The misguided zeal of some benevolent individuals thrust large numbers of women into hospitals, without organization or consultation with surgeons. As a consequence, they were summarily dismissed by the surgeons.

The situation changed quickly as the volunteer nurses gained experience and training. One such volunteer, Amanda Akins, was 35 when, in 1863, she left home to serve at the Armory Square Hospital in Washington, D.C. Just before her death in 1911 she published an account of her nursing experience during the Civil War (The Lady Nurse of Ward E):

My Dear Sisters: You are no doubt anxiously looking for a “sign of life” from me, but I can tell you initiation into hospital life of such a novice is not lightly to be spoken of, and until my ideas ceased floundering and I could recognize my old self again, I could not trust myself with a pen (Smithsonian, 2011). 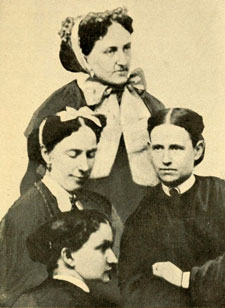 Amanda Akin and three of the nurses she worked with at Armory Square Hospital: (clockwise from top) Helen Griggs, S. Ellen Marsh, Nancy Maria Hill, and Akin. She included this image in her book The Lady Nurse of Ward E. Courtesy of National Library of Medicine.

When the war ended, the sacrifices made by nurses and other female volunteers succeeded in changing public opinion about women working in healthcare. In 1868, just three years after the end of the Civil War, Samuel Gross, president of the American Medical Association, strongly endorsed the formation of training schools for nurses (Egenes, 2009).

Just five years later, in 1873, the first educational programs for nurses in the United States were established in New York, Massachusetts, and Connecticut. The teaching in the American schools were largely based on the Nightingale Method, although there were some differences, particularly in hospital oversight of the nursing students. This period—from 1873 to 1893—is considered by some to be a “pioneering period” of nursing education (Stewart, 1935). The new nursing schools were so popular and successful that soon every hospital wanted a school of nursing. Isabel Stewart, RN, wrote in 1935:

The period from 1863 to 1893 was distinctly a pioneering period. The immediate problem was not to build a finished educational structure, but to clear the ground, to provide decent conditions for both patients and nurses, and to lay the foundation for an adequate nursing service.

In the late 1800s, Florida was still sparsely populated and regularly experienced outbreaks of yellow fever, cholera, typhoid fever, leprosy, scarlet fever, and smallpox, as well as hookworm infestations. Provisional boards of health, which had existed in Florida since 1821, did their best to address the recurring epidemics but lack of resources, poor communication, and the logistics of traveling the great distances between towns and counties highlighted the need for an organized, statewide board of health.

In 1888 Florida experienced a particularly severe epidemic of yellow fever, causing widespread panic. During the outbreak, 10,000 people (nearly one-third of the county’s residents) fled Duval County, although many were turned away at their destinations. Among those who remained, there were more than 5,000 recorded cases of yellow fever and more than 400 deaths (Florida Memory, n.d.). Due to intense public outcry, and in an effort to better address these types of outbreaks, the Florida State Board of Health was established in 1889 by Florida Governor Francis Fleming. 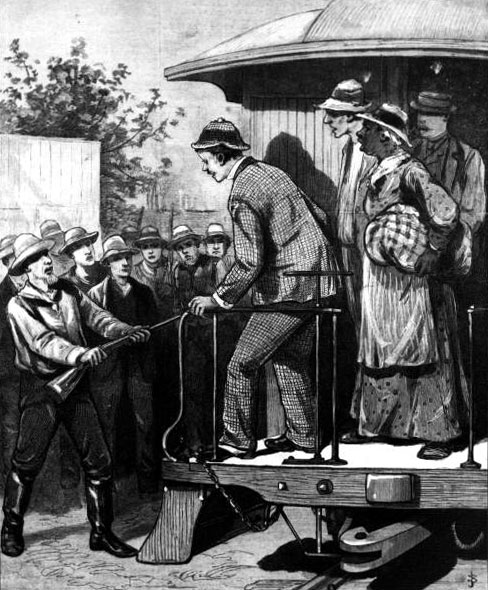 Refugees from areas with yellow fever were not allowed to leave the trains for fear of spreading the disease. From Frank Leslie’s Illustrated (New York) Newspaper, 1888. Source: State Archives of Florida, Florida Memory.

The emergence of germ theory in the late 1800s was another event that had a profound effect on medicine. As medical doctors expanded their education and training, nurses also recognized the need for more comprehensive training. Thus began a period of significant increase in the number of nursing schools throughout the United States, and shortly thereafter the fight for nursing licensure (then referred to as “nursing registration”). As the nineteenth century drew to a close, nurses themselves, along with many women’s organizations and their leaders, lobbied for nurse registration, the development of standards for nursing education, and establishment of nurse practice acts.

By 1900, between 400 and 800 nurse training schools were operating in the United States (Cortada, 2016) and both support for and opposition to the regulation of nursing practice was strong. Although a vocal proponent for improvements in education and working conditions, an aging Florence Nightingale famously opposed nurse registration. Nightingale stated in 1890,

The tendency is now to make a formula of nursing, a sort of literary expression. Now, no living thing can less lend itself to a formula than nursing. It cannot be tested by public examinations, though it may be tested by current supervision (Goodnow, 1916). 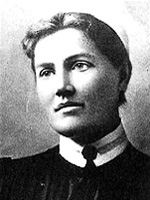 Despite fierce opposition, the fight for nursing registration was on—led by members of the New York State Nurses Association, formed in 1901. The preliminary political work was spearheaded by a handful of women, most notably Isabel Hampton Robb, Sophia Palmer, Sylveen Nye, and members of the New York Federation of Women’s Clubs, which a few years earlier had passed a resolution urging the formation in New York State of a Nursing Board of Examiners to be chosen by a state society of nurses.

The First Registration and Practice Acts

In 1902 members of the newly formed New York Nurses Association met at the Rochester City Hospital to discuss the establishment of the nation’s first nurse practice act. In attendance was an elderly and frail Susan B. Anthony, who urged the attendees to remember the influence and power of their work. Anthony predicted, in a speech to the group, “The day is coming when trained nurses will be required to possess a college education before being admitted to training” (Willis et al., 2013).

Just one year later, in 1903, North Carolina passed the first “permissive” registration law for nurses. Permissive licensure allowed nurses who met certain standards (such as graduating from a nursing school and passing a comprehensive exam) to work as a nurse but did not allow the use of the title “registered nurse.”

At meetings it shall be their duty to examine all applicants for license as registered nurse, of good moral character, in the elements of anatomy and physiology, in medical, surgical, obstetrical and practical nursing, invalid cookery and household hygiene, and if on such examination they be found competent to grant each applicant a license authorizing her or him to register, as hereinafter provided, and to use the title “Registered Nurse” signified by the letters R.N. The said Board of Examiners may in its discretion, issue license without examination to such applicants as shall furnish evidence of competency entirely satisfactory to them. Each applicant before receiving license, shall pay a fee of $5.00, which shall be used for defraying the expenses of the Board (North Carolina Nursing History, 2013).

New York, New Jersey, and Virginia succeeded in passing nurse registration laws by the end of 1903, and by 1921, 48 states, the District of Columbia, and the Territory of Hawaii had enacted laws that regulated the practice of professional nursing (Egenes, n.d.). Florida signed its first nurse practice act into law on June 7, 1913.

Mandatory licensure for nurses became law in 1935, but due to World War II was not enforced until 1947. The terms Registered Nurse and Licensed Practice Nurse (vocational) are now legally protected titles in all states.

The First Nurses Association in Florida

With nursing registration and nurse practice acts becoming law in several states, nurses saw the need for professional organizations to represent their needs. In 1911 the Associated Alumnae Association—formed in 1896 to improve nursing education, establish a code of ethics, and promote the interests of nursing—renamed itself the American Nurses Association. The establishment of a national nursing association, along with the movement to develop registration laws and the adoption of practice acts, had a profound impact on nurses in Florida.

In Jacksonville, Florida, students from two training schools—De Soto Sanitarium and St Luke’s Hospital—began to discuss the need for a professional association of nurses in Florida. Between 1909 and 1913, nurses and teachers from these schools formed what came to be known as the Florida Nurses Association. The goals of the new association were to promote unity among nurses, to keep abreast of progress, and to unite for greater control of nursing (educational, legal, practice) (FNA, n.d.).

Over the next decades, as nursing education improved and nurses began to practice in a variety of settings, nursing developed into a true profession. State nurses associations, as well as other professional nursing associations, developed professional regulations and standards of professional practice, promoted quality nursing, and engaged in legislative advocacy, collective bargaining, and public protection.

Recently celebrating its one hundredth anniversary, the Florida Nurses Association (FNA) has grown from a small group of dedicated nurses into a successful statewide organization. Its mission is to promote and advance professional nursing in Florida. It does so by influencing legislation, promoting education, and advocating for improved quality and availability of healthcare services in Florida. FNA is a nongovernmental organization and membership is voluntary.

Although there are dozens of professional organizations representing the interests of nurses in Florida, the Florida Nurses Association is the only nursing organization representing all Florida nurses regardless of specialty or practice area.