Opioid Epidemic: The Crisis ContinuesPage 3 of 11

The Unites States is experiencing an opioid epidemic. The New York Times reported that opioids are now the leading cause of death of Americans under the age of 50 (Katz, 2017). The 2018 National Survey on Drug Use and Health (NSDUH) indicates approximately 9.9 million people aged 12 or older misused prescription pain relievers in the past year (SAMSHA, 2019).

Opioids include codeine, fentanyl, hydrocodone, meperidine, hydromorphone, methadone, morphine, oxycodone, and heroin. Drugs of the opioids class are powerful analgesics and are used for pain management. Because they are powerful, and powerfully addicting, millions of people who use them have become physically and psychologically dependent or addicted to them. From 2000 to 2015, more than half a million people in the United States alone died from opioid drug overdoses.

Opioids are categorized as schedule 1 or 2 drugs by the Drug Enforcement Agency (DEA). A schedule 2 drug such as morphine means that, although it has been approved for medical treatment as an analgesic, it has high potential for strong psychological and physiologic dependence. It has been used for over one hundred years as an analgesic. Heroin is made by taking morphine, which is from the opium plant, and adding a chemical reagent that makes it more potent and potentially dangerous. Heroin is a schedule 1 drug and is not approved for any medical use because it is highly addictive.

In the late 1990s, pharmaceutical companies reassured the medical community that patients would not become addicted to opioid pain relievers. Healthcare providers began to prescribe them at greater rates in response to a perceived epidemic of unrelieved chronic pain. The increase of prescription opioids led to widespread misuse of both prescription and non-prescription opioids, which are in fact highly addictive despite drug manufacturers’ claims. Since the 1990s, prescription opioids have exacted an increasingly severe toll: Unintentional overdose deaths have quadrupled since 1999.

The government response to the “opioid crisis,” as it was called, has been ramping up since about 2010 ,as overdose death rates increased. In 2017, U.S. Department of Health & Human Services (HHS) declared a public health emergency and announced a 5-Point Strategy To Combat the Opioid Crisis:

Almost 400,000 people died from an overdose involving an opioid, including prescription and illicit opioids, between 1999 and 2017. The CDC considers the opioid crisis in the United States to have three waves: 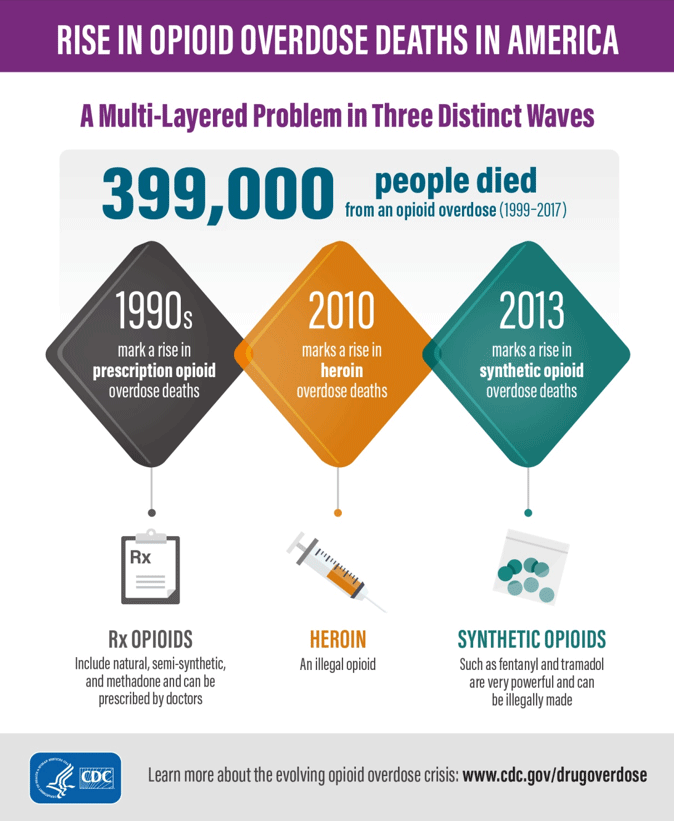 Thousands of consolidated lawsuits have been filed against nearly two dozen big pharma companies, arguing that fault of opioid addiction and overdose deaths lies with virulent advertising campaigns. The campaign against America’s opioid epidemic earned a victory in August 2019 when an Oklahoma judge held Johnson & Johnson responsible for its role in oversupplying addictive drugs. Judge Thad Balkman found that

Balkman also found that Johnson & Johnson was part of a wider collaboration by pharmaceutical makers to change medical policy by “creating the illusion of an epidemic of untreated pain to which opioids were the solution” (McGreal, 2019a).

The State of Pennsylvania filed a lawsuit in May 2019 against Purdue Pharma, the company that made billions of dollars with OxyContin. The suit states “Even when Purdue knew people were addicted and dying, Purdue treated patients and their doctors as ‘targets’ to sell more drugs.” Pennsylvania is among the states hardest hit by the opioid epidemic. Roughly 5,390 Pennsylvanians died from drug overdoses in 2017—more than any other state. Most of those deaths were from opioids. The suit continues, “Tragically, each part of Purdue’s campaign of deception earned the company more money, and caused more addiction and death.” Pennsylvania’s Attorney General Josh Shapiro claims that the Purdue supervisors encouraged sales staff to focus on the elderly and veterans, going so far as to establish a website called exitwoundsforveterans.org, which “deceptively assured veterans that Purdue’s opioids are not addictive” (Winter & Schapiro, 2019).

A lawsuit brought by the Washington Post and owners of Gazette-Mail recently resulted in the removal of a protective order to keep from the public the raw data of the Automation of Reports and Consolidated Orders System (ARCOS) database. Some drug companies and the Drug Enforcement Agency (DEA) fought to keep the information secret, arguing that it contains proprietary details about their business practices and sensitive information used by law enforcement. Now the public can see the astonishing scale of the prescription opioid deluge. The drug industry shipped 76 billion oxycodone and hydrocodone pills over a 7-year period (2006 to 2012) (Achenbach, 2019; Mann, 2019).

In July 2019, just days after the ARCOS database federal prosecutors charged a former president of a major pharmaceutical distributor (Anthony Rattini, former head of Miami-Luken) with deluging more than 200 pharmacies in West Virginia, Ohio, Indiana, and Tennessee with millions of opioid pills and ignoring mounting evidence that they were causing addiction and overdose deaths, and that the drugs were not being dispensed with legitimate prescriptions. Miami-Luken* acknowledged delivering 5.7 million opioid pills to Kermit, West Virginia (population 380 people)—the equivalent of 5,264 pill for every resident including children (McGreal, 2019b).

Purdue Pharma filed for bankruptcy in September 2019 after reaching a tentative settlement with state and local governments that were suing it over the toll of opioids. The deal, which could be up to $12 billion over time (AP and Strickler, 2019). Purdue Pharma is defending itself in lawsuits from 2,600 governments and other entities.

Bob, a 45-year-old construction worker was being treated in an acute care hospital for a broken femur repair and a low-back, work-related injury. The nurses offered narcotic analgesics around the clock, as ordered, to keep Bob comfortable. (Rather than offer any other comfort measures, it was just easier to administer the narcotic that kept him from using the call light repeatedly.)

After he was discharged, Bob followed up with his primary care physician, who initially prescribed oxycodone and muscle relaxers in a limited supply and without refills, per standard practice. Within one month, Bob returned complaining of constant pain, and he was given a new prescription for oxycodone. The monthly visits became routine and without additional assessments, offering alternative modalities or a narcotic use contract, the prescriptions continued to be written and filled.

Eventually, the medications offered no further pain relief and Bob began supplementing with legal marijuana to provide relief, both of the initial back pain and of the progressive physical craving for the opioid. He visited several other physicians to increase his supply and none of the providers were aware of his multiple visits and duplicated prescriptions.

Bob eventually advanced to street heroin and ultimately overdosed on the combination of opioids that took his life.

What could have been done to avoid this needless loss of life?

What is the role of healthcare professionals in the prescribing and monitoring of opioid drugs?

What is the nurse’s role in the opioid epidemic?

What prevention and treatment strategies are available?

Not every opioid-related death is a stereotypical drug addict who is homeless and helpless. Opioid users include persons of any age, gender, religion, or culture who may have been prescribed opioids for pain control of injuries not their own fault. Often the desire for acute or chronic pain relief evolves to the need for stronger pain control and drug-seeking behaviors driven by the basic desire for pain relief.

Unfortunately, opioid drug users also include those looking for entertainment through narcotic drug use and those who gradually become addicted. For example, compare these two users: one, a teen looking for peer acceptance and entertainment, and the other an educated healthcare professional seeking pain relief; both suffer serious consequences from misuse of the powerful class of drugs known as opioids:

Healthcare professionals who are a part of prescribing or administering opioids need to be aware of the potential for abuse and misuse. Not only do they need to be well informed about the appropriate use and cautions for opioid use but they also need to be able to recognize its effectiveness, side effects, and overdose symptoms, and to recognize abuse in patients as well as their colleagues. Healthcare professionals are actually at greater risk than the general population for opioid abuse because of their access to the drugs.