Opioid Epidemic: The Crisis ContinuesPage 4 of 11

2. What Precipitated the Opioid Crisis?

So how did we get to this point of millions of Americans using and abusing opioids? The documented use of opioids began as early as the 3400 B.C. in Mesopotamia, where they called it the “joy plant.” Opium was used for every medical malady including diarrhea, cholera, rheumatism, fatigue, and even diabetes by early Egyptians. Opium was regularly traded by the Turks and Arabs in the sixth century.

Opioid use became much more common in the early 1700s, when the British refined production from the Asian poppy plant that was grown during the British Crown Rule of India and sold in China. What became helpful as analgesia quickly became popular for treating every possible malady, and was even used as entertainment according to historical records of opium parties (Britannica, 2017). 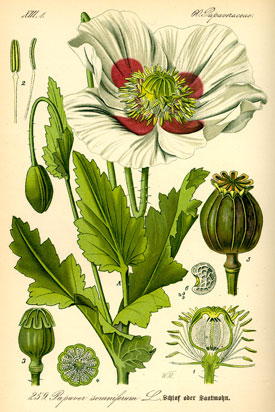 British ships delivered a thousand chests of opium into China in the 1760s, gradually increasing it to 4,000 chests in 1800—to eventually 40,000 chests in 1838. Opium was immensely popular in China and the desire for porcelain, silk, and tea was equally in demand in the West, so the trading continued. Alarmed by its powerful addicting properties among the Chinese citizens, the Chinese emperor Yongzheng (1722–1735) eventually prohibited the sale and smoking of opium, which led to opium wars with the Westerners (Britannica, 2017).

Opium trading eventually became regulated and it slowed during the Communist reign in twentieth-century China. Unfortunately, opium trading continued with new players, notably tropical growers and illegal importers from Central and South America to the United States. In the late 1800s, Bayer manufactured and sold heroin, and its misuse was rampant until regulations and taxes were designed to thwart its use. Then, after WWII and Vietnam, another wave of use and abuse crossed America with the resultant reflex to further regulate and tax its use (Britannica, 2017). The so-called war on drugs has continued.

Concurrent with the increasing demand for opioids here in the United States was the medical profession’s increased interest in addressing patients’ pain. Pain was added as the fifth vital sign in 1996 and a movement to minimize all pain increased prescriptions for opioids.

Campaigns by pharmaceutical companies boasting the effectiveness of their drugs without side effects added to the growth of prescriptions for opiates. These companies even created organizations with persuasive lobbyists to decrease barriers and regulations on opiate use. In 2007 the maker of Oxycontin (Purdue Pharma) was forced to pay over $6 million in fines for misleading claims about opioid safety. More recent lawsuits against drug companies have resulted in additional reparations payments in the billions of dollars.

Another cause for the increase in the opioid epidemic is the ease of creating the drugs chemically, including semi-synthetic and fully synthetic drugs created in a laboratory by pharmaceutical companies. Creating heroin from morphine can be done in a home laboratory, thus contributing to the availability of street drugs. The demand for heroin by Americans continues to support the supply coming illegally from Central and South America into the United States.

Balance is the goal in treating patients’ pain and preventing drug abuse and diversion. On January 1, 2018, the Joint Commission implemented a new and revised pain assessment and management standards. The new standards, which revise the original standards established in 2001, state that hospitals must:

National Center for Complimentary and Integrative Health (NCCIH) is part of the National Institutes of Health Pain Consortium, which coordinates pain research across NIH. NCCIH-supported studies are helping to build an evidence base on the effectiveness and safety of complementary modalities for treating chronic pain. The scientific evidence suggests that some complementary health approaches may help people manage chronic pain, such as mindfulness-based interventions, hypnosis, and cannabinoids (NCCIH, 2018).

People do still have pain

Some doctors express frustration at new state laws on prescribing opioids. Although they understand the intent of the laws is to reduce misuse of the powerful prescription opioids, they say that the regulations have caused administrative obstacles and a climate of fear for doctors and patients. Doctors claim that some health insurers are using the laws as a reason to deny or delay prescriptions even for patients with cancer and other terminal illnesses. “It’s not like people don't have pain anymore. They do. There are patients who need something. We as doctors are not just responsible for managing opioid prescriptions, but to manage patient care and pain,” says Betty Chu, president of the Michigan State Medical Society (Greene, 2018).

Insurers further compound the problem of promoting responsible treatment of patients with pain. Many insurers won’t pay for less-addictive ways of controlling patients’ pain. Such treatments include physical therapy, acupuncture, nerve blocks, massage therapy, psychological counseling, and cognitive therapy. “‘The epidemic isn’t just about how easy opioids have been to come by. It’s also about how hard it is to access alternatives,’ says Caleb Alexander, co-director of Johns Hopkins University’s Center for Drug Safety and Effectiveness. ‘No one ever died of an overdose of physical therapy’” (Demko, 2019). There is great variation in what insurers will cover.

Which of the following is a cause of the opioid epidemic?