Asthma: Calming the AirwaysPage 3 of 11

Advances in science have led to an increased understanding of asthma and have improved approaches to treatments that can achieve good control over symptoms. Yet, in spite of these advances, the rate of asthma is up to 15% of the population in westernized countries and even higher in less-developed countries, making this disease a worldwide concern.

In the face of these difficulties, the challenge is to help all asthma sufferers, particularly those at high risk, to receive quality asthma care. This goal can best be met through identification of new asthma incidents using the most current knowledge, along with correct assessment of triggers and severity of symptoms, which is essential to improving outcomes for clients as well as decreasing morbidity and mortality.

Both the incidence and prevalence of asthma have grown considerably over the past two decades, increasing the cost of care in offices and emergency departments as well as increasing rates of inpatient hospitalizations. In 2009 asthma prevalence was 8.2% of the U.S. population (24.6 million people). It was higher within certain population subgroups including females, children, African Americans, those of Puerto Rican decent, persons with family income below the poverty level, and those residing in the Northeast and Midwest regions of the United States (Akinbami, 2011).

In 2007 there were 1.75 million asthma-related emergency department visits and nearly half a million asthma hospitalizations. Asthma emergency visit and hospitalization rates were higher among females than males, among children than adults, and among black than white people. Despite the high burden from adverse impacts, use of some asthma management strategies based on clinical guidelines for the treatment of asthma remained below the targets set by the Healthy People 2010 initiative (Akinbami, 2011).

Aside from quality-of-life issues experienced by all asthma sufferers, the prevalence of the disease and the number of individuals requiring intensive care is creating a burden on the healthcare system, which is left with the task of planning care that addresses correct use of medication while factoring in home, school, and workplace triggers over which there is little control.

It is well recognized that asthma has an inheritable component despite that fact that the genetics involved in the development of asthma are only partly known (Holgate, 2004; Ober & Thompson, 2005). To date, many genes have been found that either are involved in, or linked to, the presence of asthma. The role of genetics in immunoglobulin E (IgE) production, airway hyper-responsiveness, and dysfunctional regulation of inflammatory mediators (eg, cytokines, chemokines, growth factors) has appropriately captured attention. In addition, studies are investigating genetic variations that may determine a person’s response to therapy.

How sex hormones or related hormone production are linked to asthma has not been established but hormones may contribute to the onset and persistence of the disease. In early life the prevalence of asthma is higher in boys. At puberty, however, the sex ratio shifts, and asthma appears predominantly in women (Horwood et al., 1985). 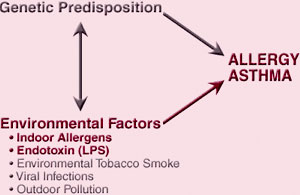 Atopy, the genetic predisposition for the development of an IgE-mediated response to common airborne allergens, is the strongest identifiable factor for developing asthma. A history of atopy is often found in clients and their families and is commonly manifested by conditions such as:

Individuals with these findings plus chronic cough should be considered potential candidates for asthma when accompanied by characteristic respiratory symptoms. As seen in the illustration below, a genetic predisposition when combined with environmental factors can precipitate asthma in certain individuals.

Asthma is a chronic respiratory disease characterized by inflammation and narrowing of small airways. As a guide to describing asthma and identifying treatment directions, the working definition of asthma and the guidelines put forth in the 1997 Expert Panel Report 2 (EPR 2) remain valid:

Asthma is a chronic inflammatory disorder of the airways in which many cells and cellular elements play a role: in particular, mast cells, eosinophils, T lymphocytes, macrophages, neutrophils, and epithelial cells. In susceptible individuals, this inflammation causes recurrent episodes of wheezing, breathlessness, chest tightness, and coughing, particularly at night or in the early morning. These episodes are usually associated with widespread but variable airflow obstruction that is often reversible either spontaneously or with treatment. The inflammation also causes an associated increase in the existing bronchial hyper-responsiveness to a variety of stimuli. Reversibility of airflow limitation may be incomplete in some clients with asthma. (NIH, NHLBI, 1997)

Asthma severity can range from mild with occasional symptoms to severe with persistent symptoms that impact quality of life. However, even people with mild disease can suffer severe attacks. Common attack triggers include airway irritants, allergens, respiratory infections, stress, and exercise. Morbidity, direct healthcare costs, indirect costs such as lost productivity, and mortality due to asthma continue to pose a high burden in the United States (Akinbami, 2011).

Comparison of Normal and Asthmatic Airways