People with cognitive decline develop various eating and swallowing problems, which along with the behavioral and psychological symptoms of dementia, can strongly affect nutrition (Koyama et al., 2016). Difficulty swallowing, changes in appetite, and changes in eating habits occur as dementia progresses. Malnutrition and dehydration affect general health, worsen the frequency and seriousness of complications (especially infections) and lead to a loss of independence. These symptoms are thought to be affected by cognitive dysfunction, psychiatric and neurologic symptoms, and decline of daily activity (Kai et al., 2015).

Malnutrition is an inadequate diet in which either the quantity or quality of nutrients does not meet nutritional needs. It includes both over-nutrition and undernutrition. Undernutrition affects up to 10% of older people living at home, 30% of those living in care homes, and 70% of hospitalized older adults (ADI, 2014). Malnutrition in older adults with dementia:

Dehydration occurs when fluid loss is greater than fluid intake or when there is an excessive loss of body fluid. It is one of the ten most frequent diagnoses responsible for the hospital admission of older adults in the United States and is associated with increased mortality and morbidity. Nutrition studies demonstrate that a loss of only 1% to 2% of total body water may result in impaired cognitive performance; in older adults this percentage was shown to be even lower (Sfera et al., 2016).

Physiologic changes that affect nutrition and hydration include:

Risk Factors for Malnutrition and Dehydration

Risk factors for malnutrition and dehydration include:

Signs and Symptoms of Malnutrition and Dehydration

The mechanisms underlying weight loss and undernutrition in dementia are only partly understood. Reduced appetite plays a role, as does the disruption of eating and feeding due to cognitive and behavioral problems. Changes in the central regulation of appetite and metabolism may also play a key role (ADI, 2014).

Signs and symptoms of malnutrition include:

Signs and symptoms of dehydration include:

Strategies for Addressing Malnutrition and Dehydration

Providing and encouraging proper nutrition and hydration in people with dementia is an important part of their overall care. Malnutrition can be prevented or reduced with early intervention, which must be rapid and appropriate (Piva et al., 2012).

Clients with dementia take longer to eat, require prompting and encouragement, and may have problems with coordination and swallowing. Training, education, and support are needed for caregivers, particularly when aversive feeding behaviors and feeding difficulties occur. Basic information should be provided to families and training and dietician services should be available (ADI, 2014).

Despite the seriousness of malnutrition and dehydration in people with dementia, Jane Murphy and Joanne Holmes at the Burdett Trust for Nursing (Nutridignity in Dementia) point out that:

Assistive or adaptive tableware have been a mainstay in nursing homes and assisted living facilities for many years. Unfortunately, assistive tableware is not used as much as it could be and users of assistive table settings can feel different and stigmatized (ADI, 2014).

A common strategy is to simplify the amount of utensils by providing just a plate and spoon with pureed or diced food that can be eaten without needing to be cut up by the client. However, clients can push the food off the side of the plate when they are trying to pick it up. To address this, a plate with a high lip in its profile that helps to push the food onto the spoon is recommended (ADI, 2014).

The slanted bottom hip lip of the plate can help users to gather food on one side without scooping. Spoon heads are designed to match the curvature of the bowls to pick up the food easier. Designed by Sha Yao, Eatwell.com. Used with permission.

Well-designed assistive tableware should offer a range of matching items that form a complete set, can be used by people of all abilities, and resemble standard tableware. Color contrasts should feature prominently—for example royal blue plates provide a contrast both with a white table covering and food on a plate. The same approach can be used with cups; for example, royal blue and white can be used to help those with low visual acuity or agnosia locate the handle and rim. The sides of the cup should be angled to reduce the need to tip the cup, a large handle will assure a good grip, and the top should be wide enough to allow a person’s nose to fit inside the cup when tipped (ADI, 2014). 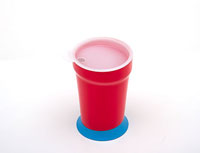 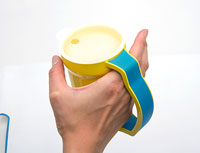 An example of a complete set of assistive tableware. This tableware design applied research from Boston University. According to the study, colors help a person with dementia to reduce visual impairment and consume 24% more food and 84% more liquid. Designed by Sha Yao, Eatwell.com. Used with permission.

The standard “care cup” is one of the most disliked assistive tableware items because of its look similar to a baby product. Its purpose is to help clients with reduced strength and dexterity grip both sides of the cup without spilling the liquid or burning their hands, as they might with a ceramic mug. An alternative approach is a cup made from ceramic but from a mold with a double skin and an air-filled cavity between the inside and outside surfaces. This keeps the liquid warm while the outside of the cup remains cool (ADI, 2014).

Modifications to Mealtime Environment and Routine

The last 30 years have seen a gradual transition to flexible, individualized, and person-centered care that more closely resembles households. For people with dementia it may be particularly important to have a dedicated dining room, the use of which is limited to meals and food. This should look like a dining room in a home, with recognizable furniture such as dining tables and sideboards (ADI, 2014).

Large communal dining areas should be avoided, in particular for clients with dementia. Large dining spaces can be noisy and confusing, with too much sensory distraction, and do not provide the sensory cues that orient a person with dementia to mealtime (ADI, 2014).

Smaller dining rooms have a more intimate and familiar ambience, and reduce confusion as to the function of the room. Smaller dining rooms, bright and welcoming colors, and other residential features seem to be associated with increased food intake (ADI, 2014).

“Eat-in-kitchens” linked to dining areas help to involve clients in meal preparation. Kitchens evoke feelings of warmth, comfort, and security. Linking the eating area to a kitchen stimulates all of the senses with the smell and sound of cooking, cueing that a meal is about to take place. Food preparation smells stimulate the appetite of people with dementia and remind them of meal times (ADI, 2014).

In older adults with dementia, dietary restrictions and challenges associated with changes in eating behavior can cause significant issues for caregivers. Food becomes less palatable as taste and smell decline. These changes affect the taste and texture of food. Swallowing difficulties can lead to coughing and aspiration, turning eating into an unpleasant chore.

For people on restricted diets due to high blood pressure or diabetes, salt and sugar may be restricted, making food bland and tasteless. For people with swallowing difficulties or those at risk for aspiration, thickened liquids and chopped-up food may be unfamiliar and unsatisfying. People living in areas without easy access to a good grocery store, people with mobility issues, or those unable to afford good quality food are not likely to be able to meet nutritional needs.

Addressing Concerns about Malnutrition and Dehydration

In adult day care centers, clients are required to be offered refreshments throughout the day. The refreshment, as well as meals, must adhere to the USDA dietary guidelines. Lunch and snacks must come from USDA food groups and be supplied by an approved vendor. Adequate hydration must be provided (at least 3x/day) and beverages must be provided outdoors and in hot areas where dehydration may be an issue.

Oral protein and energy supplements can be used in older people with undernutrition, or at risk of undernutrition. Their use is associated with significant weight gain, and a reduction in mortality for those who are undernourished (ADI, 2014). A higher protein intake is associated with higher muscle mass and a reduced loss of lean mass over time (Donini et al., 2013).

Studies have shown that older adults frequently do not meet the official recommendations for intake of fruits and vegetables and greater consumption is recommended. Many community-dwelling older adults lack at least one micronutrient and are not getting enough protein in their diets. Fruits and vegetables are important sources of micronutrients, including vitamins E and C. Fiber, vitamins (vitamins E, D, B1, B12, and folic acid) and micronutrients (iron, potassium, and calcium) and bioactive compounds (polyphenols, carotenoids, phytosterols) are frequently below recommended dietary allowances (Donini et al., 2013).

There is consistent evidence that macronutrient oral nutritional supplementation is effective in maintaining or improving weight among people with dementia. Supplements are well tolerated, with high levels of adherence under controlled clinical trial conditions (ADI, 2014).