Sepsis is a potentially fatal disease. For the best chance of treating it successfully, clinicians need to recognize it early and treat it quickly; however it can be difficult to diagnose, especially early in the course of the disease.

Sepsis coexists with an infection, and often with other comorbidities, all of which produce their own signs and symptoms. The challenge is to pick out the signs of sepsis from among the other abnormalities plaguing the patient. To make sepsis easier to identify, there has been an effort to standardize its definition despite its wide range of presentations. Following are the current clinical definitions of sepsis and its related terms. Earlier terms for the syndrome included “blood poisoning”, “bacteremia,” and “septicemia”, but in 1991 the American College of Chest Physicians standardized terminology to include, from mild to severe: infection, SIRS, sepsis, severe sepsis, septic shock, and multiple organ dysfunction syndrome (MODS). 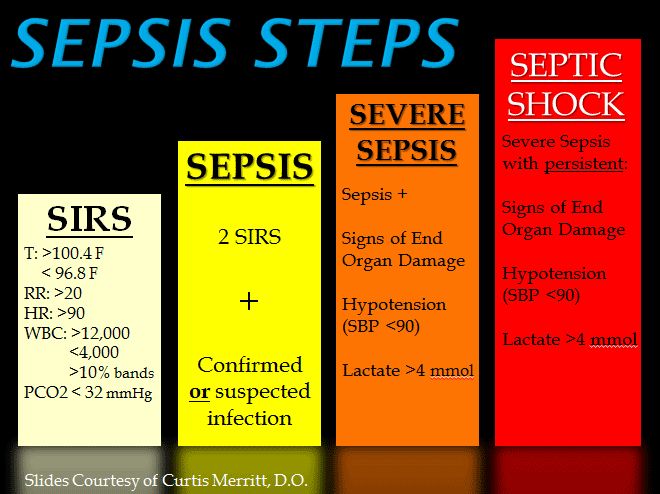 Infection is the presence of microorganisms causing an inflammatory response and triggering the natural immune system to fight the infection.

Sepsis is an uncontrolled complete-body response to an infection, regardless of whether the infection is local, extensive, or bloodborne. This over-reactive response produces two or more of the signs of SIRS. The septic reaction threatens to damage organs and to destabilize the circulatory system. Sepsis can lead to organ failure, shock, and death (Surviving Sepsis Campaign, 2011).

Severe sepsis, or sepsis syndrome, is present when the patient has progressed to a stage in which one or more organs or organ systems begin to fail. The Surviving Sepsis Campaign no longer uses the term severe sepsis but simply sepsis.

Severe sepsis is sepsis plus one of the following clinical problems:

Septic Shock occurs when blood pressure cannot be maintained above 90 mmHg systolic despite adequate fluid resuscitation. The sepsis creates massive vasodilation and without adequate circulatory support and pressure, organs become hypoxic and can eventually die. Septic shock is acute circulatory failure with refractory (difficult to reverse) hypotension that is unexplainable by other causes. The term shock describes a condition in which many tissues throughout the body become hypoxic due to poor perfusion. In shock, normal homeostatic mechanisms are either not functioning or not adequate to deliver enough oxygen to tissues. If it is not reversed, shock leads to organ failure and death. Septic shock is a form of distributive shock. In septic shock, there is hypotension and vasodilation that cannot be reversed by giving adequate fluids. When the hypotension of septic shock does not respond to vasopressors, the condition is called refractory septic shock (Munford & Suffredini, 2009).

Shock is categorized as:

Severe sepsis, or sepsis syndrome, is:

Q: In our case scenario, what kind of sepsis did Nancy Murphy have? Why?

A: She initially presented with a pneumonia that could be treated with antibiotics. Due to the delay in IV therapy, the inflammatory response moved in severity from an infection to SIRS and later to full sepsis.