2. Description of Child Welfare in Pennsylvania

In 2011 the Pennsylvania General Assembly created the Task Force on Child Protection, the job of which was to conduct a “comprehensive review of the laws and procedures relating to the reporting of child abuse and the protection of the health and safety of children” (KKSP, 2015). More than 20 pieces of legislation were enacted by the Pennsylvania General Assembly as a result.

The new laws, which took effect on December 31, 2014, affect all aspects of child abuse and neglect cases, including reports, investigations, assessments, prosecutions, and related judicial proceedings. Definitions for perpetrator and mandatory reporter have been updated and expanded, a streamlined reporting process has been implemented, and rules for mandatory reporting have been clarified. Revisions to the definition of child abuse and clarification of reporting requirements are seen as the most fundamental and substantive changes.

The new processes are intended to make reporter rules and responsibilities clearer, while the legislation that enabled use of a single shared database has facilitated development of the Child Welfare Information Solution (CWIS), which has sped up the processes for both reporting child abuse and obtaining clearance verifications by those who work with children (KKSP, 2015; Mason, 2015).

The CWIS, launched in January 2015, is a case management system that allows real-time electronic sharing of state and county information critical to administering the commonwealth’s child welfare program (KKSP, 2015a). ChildLine is the portal for new reports of suspected child abuse by mandated reporters.

The Pennsylvania Child Protective Services Law (CPSL) encourages more complete reporting of suspected child abuse. It involves law enforcement agencies in responding to child abuse and establishes protective services in each county for the purpose of:

Title 23, Domestic Relations, Chapter 63 of the Laws of Pennsylvania is the Child Protective Services Law (CPSL). It provides critical definitions, provisions, and responsibilities for reporting abuse, the powers and duties of the Department of Human Services, the organization and responsibilities of child protective services, and certain miscellaneous provisions (PGA, 2017).

Child protective services are those services and activities provided by the department and each county agency for child abuse cases (PGA, 2017). ChildLine receives all reports of child abuse (calls and electronically) and forwards those appropriate to the respective county children and youth agency for investigation and outcome. They intervene when children are abused or neglected and provide services and activities to children and their families (PGA, 2017). When a child remains in or returns to the home in which the neglect or abuse has occurred, CPS arranges for regular (weekly) visits to assess the situation. Each county is required to provide child protective services to its residents.

General protective services include education in parenting skills; counseling; emergency caretaker services, shelter care, and medical services; part-day services and out-of-home placement services. Therapeutic activities are also available for the child and family directed at alleviating conditions that present a risk to the safety and well-being of a child (PGA, 2017).

Those services and activities provided by each county agency for cases requiring protective services, as defined by the department in regulations.

55 PA. CODE § 3490.223. General protective services—Services to prevent the potential for harm to a child who meets one of the following conditions:

The first juvenile court act dealing with the treatment of youth who commit criminal acts was established in Pennsylvania in 1901. It has been amended many times in the intervening years, with significant revisions in 1995 (JSGC, 2015), at which time the Act was amended and the mission of Pennsylvania’s juvenile justice system was redefined to include the goals of Balanced and Restorative Justice (JCJC, 2017).

The Juvenile Act mandates “. . . balanced attention to the protection of the community, the imposition of accountability for offenses committed, and the development of competencies to enable children to become responsible and productive members of the community.” All interventions and all decisions, from intake to aftercare, must be aimed at achieving these fundamental goals-community protection, offender accountability and competency development- consistent with the protection of the public interest (JCJC, 2017).

In Pennsylvania a distinction is made between child protective services (CPS) and general protective services (GPS). Reports that involve non-serious injury or neglect are treated by the agency as General Protective Service (GPS) cases and can include inadequate shelter, truancy, inappropriate discipline, hygiene issues, abandonment, lack of appropriate supervision, or other problems that threaten a child’s opportunity for healthy growth and development. GPS services are intended to help parents recognize and correct conditions that are harmful to their children.

Child Protective Services (CPS) cases require that the alleged abuse falls under the definition of child abuse as provided in the Child Protective Services law. As a reporter of suspected abuse or neglect, it is not necessary to know if the child and family in question might need CPS or GPS. If you suspect possible abuse or neglect, make the report! Child welfare professionals who staff ChildLine are trained to take the information and make the proper referrals.

Since the new reporting laws were implemented, reports of child abuse have increased each year. Between January 1, 2016 and December 31, 2016, statewide substantiated reports of child abuse were 1.7 per thousand children in 2016 (compared to 1.6 per thousand in 2015). Sexual abuse remains the leading category of abuse, followed by physical abuse. Parents continue to be the persons most responsible for abuse of their children (PDHS, 2017).

Amendments to the Child Protective Services Law, effective in December 2014, continue to drive increases in reports of child abuse. These amendments increased the number of mandated reporters of child abuse and added additional persons who could be identified as perpetrators of child abuse (PDHS, 2017). 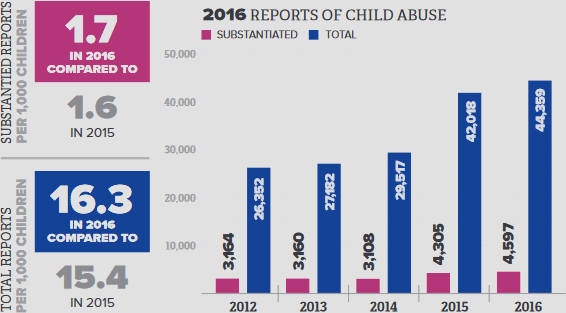