Coronary artery disease is a significant public health problem. One American dies from CAD every minute, and, of every 5 people who experience an acute coronary syndrome, 2 will die from related heart problems within the year. The problem of atherosclerosis begins in youth, and CAD develops gradually over the decades; therefore, health professionals in every field face some aspect of CAD and have a role in helping patients prevent or control the disease and its deadly consequences.

Prevalence indicates how many people currently have the disease, and approximately 1 of every 13 Americans aged 18 years and older has CAD. It is the leading cause of death for people of most racial and ethnic groups in the United States (Mozaffarian, 2015; CDC, 2016a). In the United States, CAD is most common among Hispanic Americans and least common among Asian Americans, Pacific Islanders, American Indians, and Alaska Natives.

Coronary artery disease develops gradually, and the strongest risk factor for CAD is age, so it is typically a disease of older adults. Although the disease may become clinically apparent by age 40 and the trend is increasing, people 65 years of age and older account for approximately 85% of deaths from CAD (Boudi, 2013).

Mortality is the statistic for actual deaths caused by a disease. Heart disease is the number one cause of death for both American men and women, accounting for 1 out of every 4 deaths each year. Decades ago CAD was more common in men, but in the past several decades women have approached the same levels of CAD-related deaths. Every 34 seconds someone has a heart attack and each minute someone dies from a heart disease-related event. CDC reports that 600,000 deaths each year are due to heart disease in the United States (CDC, 2016a). Patterns for age, gender, race and even geographic location have identified those at greater risk to develop CAD.

Although the frequency of CAD is similar in both black and white populations, the death rate from CAD is greater for blacks than for whites. In 2009 African Americans were 30% more likely to die from heart disease than non-Hispanic white men (OMH, 2013). 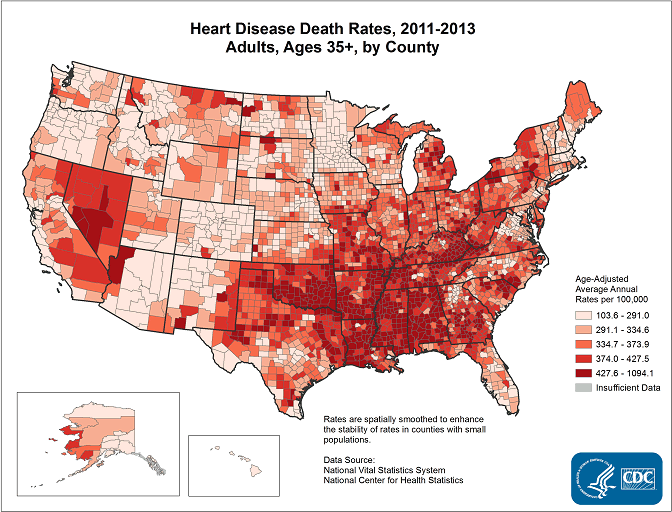 Death rates vary throughout the United States. The highest death rates (darkest colors) are in the South and around the regions of Mississippi, Alabama, Georgia. Source: CDC, n.d.

There is one hopeful statistic. Despite the fact that CAD is the leading cause of death in the United States, there has been a 30% reduction in the mortality rate since the latter part of the twentieth century. Factors such as increased awareness and patient education, early identification and treatment, availability of coronary artery bypass surgery and stent placement, thrombolytic therapy, and an emphasis on lifestyle modification are some of the reasons for this reduction (Boudi, 2013).

Deaths from CAD often happen to people with no previous heart symptoms. Although some people may feel a rapid heartbeat or dizziness that alerts to a dangerous heart rhythm, over half of the people who have sudden cardiac deaths were previously asymptomatic (WebMD, 2012).

Morbidity is the term for the cost and consequences of a disease. Illness from CAD strains the American health system. Cardiovascular disease, including heart disease and stroke, costs the United States $312.6 billion each year. This total includes the cost of healthcare services, medications, and lost productivity. Cardiovascular diseases are also a leading cause of disability, preventing affected persons from working and enjoying family activities (CDC, 2016a).

Although Mr. Hansen is younger than the expected age, due to his risk factors of obesity, stress, and high-fat diet, his CAD was manifested in chest pain. Because CAD silently progresses, restricting the lumen of arteries, people often are not aware it is developing until they notice symptoms. A common response, however, is denial, as people think the chest discomfort, heaviness, neck and back ache are related to stress, poor sleep, and just life.

In the United States, coronary artery disease is the number one killer of:

Who would be at great risk for developing CAD in a patient profile? Typically, we think of those older than 60 years of age. We are more likely to identify the symptoms of an MI in an older adult, but what about the variations in symptoms for those in their forties, such as Mr. Hansen, or people with diabetes and cardiac neuropathy? Be aware that CAD is developing in a younger population and that diabetic neuropathy blocks the usual symptom of chest pain that we rely on.