3. Anatomy of the Coronary Arteries

The Location of Coronary Arteries of the Heart 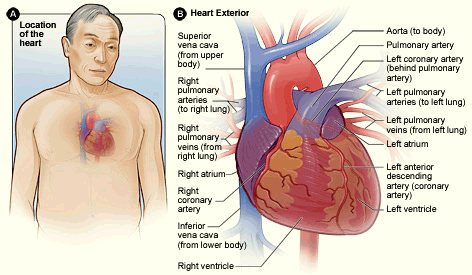 (A) Location of the heart in the body; (B) front surface of the heart, including the coronary arteries and major blood vessels. Source: NHLBI, 2016b.

Mr. Hansen received an emergency angiogram in the hospital to which he was transferred. It showed a 99% blockage in the LAD (left anterior descending coronary artery), also known as the “widow maker.” His wife was very grateful they were able to identify the blockage before she became a young widow! Mr. Hansen received two coronary stents to open the blockage.

How can you help a patient prepare and recover for an angiogram?

What is angioplasty and stenting? [1:08]