The deterioration of the person’s ability to communicate is among the most serious stressors that clients and caregivers face. Poor communication can cause conflicts, isolation, and depression and may lead to earlier placement in institutions. Improving communication can help with these problems (Egan et al., 2010). Cognitive impairment in people with dementia reduces their ability to communicate effectively, which affects the ability of caregivers to identify their needs (Pham et al., 2015).

Communication changes may be related to the area of the brain affected by the disease. Because Alzheimer’s affects the hippocampus, short-term memory is affected first. This means a person does not remember the “what, where, and when” of recent events—what they ate yesterday, where they went 2 days ago, and when their next doctor’s appointment is. Recall that Alzheimer’s also affects emotional control, which can affect communication.

In frontotemporal dementia, because damage begins in the front part of the brain, memory is less affected. But the front part of the brain controls judgment, moral reasoning, logical thinking, and social behavior. A person with frontotemporal dementia, because they are gradually losing some of their social control, might make inappropriate sexual comments, make socially inappropriate remarks, and be frustrated when trying to make decisions or plans for the future.

In vascular dementia, because damage is widespread and not necessarily associated with a specific part of the brain, communication problems are usually less specific. There may be a slowness of thought, problems with attention and concentration, and difficulties with language. Complex, fast-paced conversations or quick changes in topic may be difficult to follow.

In Lewy body dementia, abnormal clumps of alpha-synuclein (Lewy bodies) are found throughout the cortex, brainstem, and midbrain. The location of these clumps influences the symptoms, which vary from person to person. A person with Lewy Body dementia can experience paranoia, delusions, and hallucinations (usually visual), which are very real for the person experiencing them. Arguing, explaining, agreeing, or validating the paranoia or delusion is usually ineffective. Emotional support, quiet touch, and redirection are more effective than verbal communication.

Areas of Brain Associated with Communication

Certain parts of the brain are responsible for speech and language. These areas are mainly located in the left side of the brain. These brain regions and their connections form a network that provides the hardware for language in the brain. Without this network, we would not be able to talk to or understand others (Brauer, 2014).

This loss or decline of language is called aphasia. This is an acquired language disorder that affects a person’s ability to comprehend and produce language. People with aphasia have trouble expressing themselves, finding the right words, understanding the words they are hearing—and also have difficulty with reading and writing. Aphasia is a common symptom in a person with a stroke that affects the left side of the brain.

Speech and Language Areas of the Brain 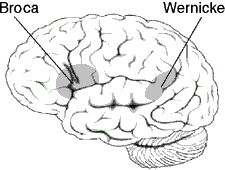 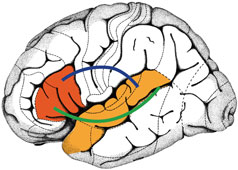 Left: Areas of the left side of the brain associated with processing speech and language. Source: Wikimedia Commons. Used with permission. Right: The two brain regions are highlighted in red and orange. The blue and green lines illustrate connections that link the two regions with one another and form a network of language areas. Frontiers for Young Minds. Reprinted with permission.

Communication is also related to our emotions. An area of the brain located close to the hippocampus (the amygdala) is involved with emotions, particularly emotional behavior, learning, and motivation. Damage to this part of the brain can affect a person’s ability to read facial emotions as well as their ability to control their own emotions. A person with dementia can lose the ability to understand when you are expressing emotions such as frustration, anger, or even happiness; this is very likely to affect the person’s ability to follow non-verbal facial cues.

A person with dementia often:

The ability to communicate with people whose speech or hearing is impaired by cognitive decline is a skill that can be developed with practice. Several therapeutic interventions have been developed to work directly with people with dementia on an individual or group basis, and also indirectly with family and professional caregivers, to improve communication and quality of life for people with dementia (Pham et al., 2015).

Techniques such as close-ended or choice-based questions, using direct and simple phrases, repeating key words and ideas, signaling when a change in the topic has occurred, using direct contact, as well as utilizing comments and nonverbal cues, will improve the quality and flow of a conversation (Egan et al., 2010).

Activity-based approaches can also improve communication. These interventions can be carried out individually or in groups and use specific or diverse activities to stimulate communication. Generally, the focus of these groups is on improving or maintaining a number of functional skills, with communication being one (Egan et al., 2010).

How you talk to a person influences how they respond. Communication techniques that improve communication and reduce agitation, confusion, fear, or anxiety include:

Introduction: As mentioned earlier, as many as two-thirds of stroke patients experience cognitive impairment or cognitive decline following a stroke; approximately one-third go on to develop dementia. This may be inadvertently overlooked because, following a stroke, the emphasis is often on recovery of functional abilities such as walking and activities of daily living.

Client Information: Angie had a brainstem stroke nearly 2 years ago and is not only struggling with mobility but also having difficulty expressing her needs and doesn’t want to participate in any activities. She is a 90-year old woman who moved from Phoenix to live with her daughter in Santa Rosa, California following the stroke. Prior to suffering the stroke, she lived independently in Mesa, Arizona with her alcoholic son. In the hospital she was given a feeding tube, and when she arrived in California she was only able to walk a few steps with a walker and needed a great deal of assistance with transfers, toileting, and bathing. For more than a year after moving she was unable to name the town or even the state she was living in. She was, however, able to read and write and her vision was good enough to read the captions on the TV.

Now, almost 2 years after her stroke, Angie is off her feeding tube, eating independently and enthusiastically, coloring intricate patterns in a coloring book, and transferring and bathing with much less assistance. She is still unable to walk and has difficulty with memory and recall.

Timeline: Because of her improvement, Angie’s daughter feels her mother might enjoy the local adult day care program. The first time they attend, Angie is withdrawn and refuses to participate in any activities—even drawing. The activities assistant, Celana, tries to engage Angie in a conversation but she just smiles and asks where her mother is. Celana asks Angie to tell her about her mother but she doesn’t (or can’t) answer. When Angie’s daughter comes to pick up her mom the day care center administrator reports that Angie didn’t participate in any activities and wouldn’t budge from her recliner—even to use the bathroom. Celena feels that, with some gentle encouragement, Angie will begin to participate in activities. She reports her observations and concerns to the facility administrator.

Intervention: The staff discuss Angie’s situation after the center closes that evening. The administrator asks Jenitra, a registered nurse, to assess Angie in the morning—to spend some time with her and try to draw her out. When Angie arrives the next day, Jenitra, using her dementia-specific training, approaches Angie from the front, introduces herself, sits beside her, and offers her hand, which Angie takes. She tries to engage Angie in a general conversation without success. Angie is very quiet and seems confused. She asks Jenitra where she is and again asks for her mother. Jenitra makes sure Angie is comfortable, gently assesses her hearing and vision, and makes sure Angie is able to understand English. Finally, after some quiet back and forth, Angie admits that she’s scared. Jenitra asks her why and she says she is scared because she can’t remember things. This provides staff members with the information they need to design activities that will help Angie feel more comfortable at day care.

Discussion: It is normal for a person to feel uncomfortable in a new social situation. This is especially true for a person with memory problems. Angie is new to adult day care and the transition has been difficult for her. The adult day care center can address a new client’s fears by making sure staff members support and educate Angie’s family caregivers, provide a single point person to ensure continuity of care, use good communication techniques, and understand that people with memory problems are vulnerable to breakdowns in the continuity of care (Naylor & Keating, 2008).

Angie has many positive things going for her, considering the severity of her stroke. Her vision is good, she has a good sense of humor, she enjoys drawing, and she eats just about anything you put in front of her. Staff members learn that Angie isn’t very fond of physical activity but is able to concentrate on her intricate drawings for long periods of time. She also likes TV. They design a program of activities that focuses on art, drawing, and painting. They encourage her to participate in the exercise class, which she does reluctantly. Eventually, the activities director realizes that Angie does better with one-on-one exercise.

Client Perspective: Angie tells her daughter that she doesn’t want to go to “that place” although she isn’t able to articulate what she means. Her daughter is able to encourage Angie to go again, telling her that they are having hamburgers for lunch. Angie says she is OK with that and agrees to attend adult day care again.