Candida: The Unfriendly YeastPage 4 of 8

2 The Incidence and Prevalence of Candida

Reports of candida yeast infections have been seen in human literature for more than 2400 years; because of its multiform characteristics, it has endured for millennia. The Father of Medicine, Hippocrates, cited symptoms and treatments for fungus in 377 C.E. The most common yeast, Candida albicans, was first named in 1923 by doctoral student Christine Marie Berhout of the Netherlands (McCoombs, n.d.).  After the discovery by Alexander Fleming of the effectiveness of penicillin yeast against bacteria, research and studies in candida have grown tremendously in the twentieth century.

As penicillin and other antibiotics became prevalent and even overused, candida infections also became more common as a side effect from removing the natural competitor of bacteria. Now as types of candida have become more threatening and resistant to antifungals (eg, Candida auris), studies are searching for better solutions.

The Cost of Candida Infections

Candida albicans is known as the fourth-most overall infectious agent in hospitals (CDC, 2019c). It is also known as the most common yeast isolated from clinical specimens in superficial and systemic infections (Magill, 2018). The reported cases of candidemia and candidiasis reveal that approximately 9 per 100,000 people in the United States will develop candidemia, which is the most invasive form of candidiasis because it enters the blood. Other yeast infections of the heart, kidney, and bones may not be easily detected as they are not in the blood and, according to CDC, the statistics and incidence of candidiasis and candidemia may actually be higher.

Since 2008 the CDC has surveyed candida bloodstream infections through a program called the Emerging Infections Program (EIP). This includes state health departments in California, Colorado, Connecticut, Georgia, Maryland, Minnesota, New Mexico, New York, Oregon and Tennessee, in collaboration with their local laboratories, academic institutions, and public health and healthcare facilities. The CDC and its partners receive reports from these agencies about cases of candidemia within their states. A current list of the counties within each state that are submitting reports can be found at the CDC website.

National trends revealed that the incidence of candidemia stabilized during 2009­–2013 demonstrating the effectiveness of hospital policies and procedures involving catheter care (Cleveland et al., 2015). Interestingly, the trends are geographic and reveal that states with higher numbers and practices of injection drug use see higher incidences of candidemia.

Candidemia rates are highest in adults age 65 and older and twice as high in blacks as in non-blacks (CDC, 2019c). Socioeconomic status and underlying health conditions may explain the difference. There has also been a decline in reports of candida in infants younger than 1 year old, and it is hypothesized that is due to better hand hygiene for hospitalized infants.

The species of candida also varies by geography, but generally C. albicans is the most common; however, since 2016 the most serious emerging species is C. auris. More than 70% of the fluconazole-resistant strains are Candida glabrata and Candida krusei (Lockhart et al., 2012).

The surveillance data by the CDC reports that up to 25% mortality is seen in hospitalized patients with candidemia. Of course, those with candidemia are those who have entered a hospital with chronic diseases, concomitant medical issues, immune deficiency, medical devices, and thus are at greater risk for fungal infections after multiple uses of antibiotics—so the true cause of death is multifactorial.

Environments and People at Risk

When the human body is healthy and body systems work well together, the immune system is able to keep fungus and bacteria in balance and use them as normal flora to help with digestion of food. When a body is out of balance and in a disease or illness state, the immune system has a difficult time taming the normal pathogens that share the human environment. Either or both bacteria or fungi may increase, resulting in infection.

Populations at risk for a normal flora imbalance include women during pregnancy and people with chronic diseases such as diabetes mellitus, HIV/AIDS, and cancer, as well as people taking antirejection medications for organ and tissue transplants, those immunocompromised, and any person with an autoimmune disease (Kwamin et al., 2013). There is also a correlation between GI tracts that are high in yeast and the development of Crohn’s disease (Gerard, et al., 2013).

Another example of populations at risk include infants. Oral thrush occurs in up to 6% of babies less than 1 month old and occurs in up to 20% of people who are having chemotherapy or those who have HIV/AIDS. Approximately 75% of women will have at least one yeast infection during their lifetime, and very often after receiving an oral antibiotic for a bacterial infection (CDC, 2019a).

When a person uses a glucocorticoid inhaler, which increases blood sugar levels in the mouth, that mouth becomes an ideal location for yeast, resulting in oral thrush. Young babies that consume milk without rinsing of the mouth or bottles that drip during sleep, also increase the risk for oral thrush and dental caries where both yeast and bacteria thrive (Sardi et al., 2013).

The use of antibiotics also increases the risk of developing a candida infection as the antibiotics kill off the normal flora of bacteria and allow the yeast to grow unopposed. This is common for women who use antibiotics for a bacterial infection somewhere else in the body and later develop a vaginal yeast infection. Antibiotics disrupt the normal vaginal flora of lactic acid bacteria, such as lactobacilli, and candida can become overgrown. Patients who receive any antibiotic treatment should be taught to consume lactobacillus or acidophilus found in yogurt, or take an over-the-counter probiotic tablet, to replace the normal bacterial flora and combat the potential overgrowth of yeast.

Candida aurisis a type of candida and was first identified in the ear discharge of a hospitalized patient in Japan in 2009 (STAT, 2016). It is responsible for serious hospital-acquired illnesses and has a mortality rate as high as 60%.

Hospital acquired infections (HAIs) are unfortunately commonly caused by yeast overgrowth, and those with mechanical devices are at an additional risk because the medical devices offer an additional site for yeast to attach to and grow out of control; it Candidemia is when the yeast enters and flourishes in the bloodstream of a human host represents the fourth leading cause of bloodstream infection in hospitalized patients in the United States (CDC, 2019c). Symptoms of candidemia are generalized and nonspecific. Usually fever that does not improve after antibiotic treatment is a clue to the etiology’s being yeast. If the yeast moves into other body organs—the kidneys, brain, eyes, or esophagus—symptoms become specific to that body system.

Candida auris has become the yeast of most concern now as it has become a resistant fungal infection, especially in hospitals. Species of the general genus candida have been considered as normal flora and have co-existed since birth such as oral thrush and diaper rash. Alarmingly, Candida auris is resistant to our usual antifungals (e.g., fluconazole). Those at greatest risk are hospitalized patients with a puncture of some sort: an IV line or a mechanical device such as an arterial line or endotracheal tube.

Ninety percent of Candida auris pathogens are resistant to at least one antifungal and 30% are resistant to two or more antifungals commonly used to kill these pathogens in the past, making the once-easy-to-treat fungus deadly. Over 587 patients in California, and more than 300 in New York, have been affected by the deadly yeast (Today Show, April 2019). Candida auris doesn’t seem to appear in healthy people in the community, but rather those immunocompromised in hospital settings and nursing homes. The medical concern is the fear of the organism making that jump from patients at risk to the general community.

The Centers for Disease Control and Prevention (CDC) has indicated that the incidence of Candida auris is now worldwide, with reported numerous cases in the United States, India, and Africa (CDC, 2019b).

Since 2016 it is reported that 613 people nationwide have died due to inability to treat an infection with Candida auris (ABC New York News, 2019). Hospitals and facilities often do not want to announce the incidence of cases within their own premises to avoid public hysteria or thwart new patients being admitted. Over half of the reported cases revealed 319 of the deaths have occurred in New York hospitals, where the outbreak appears to continue; of those, 157 patients of have died, representing a very high 57% mortality rate. 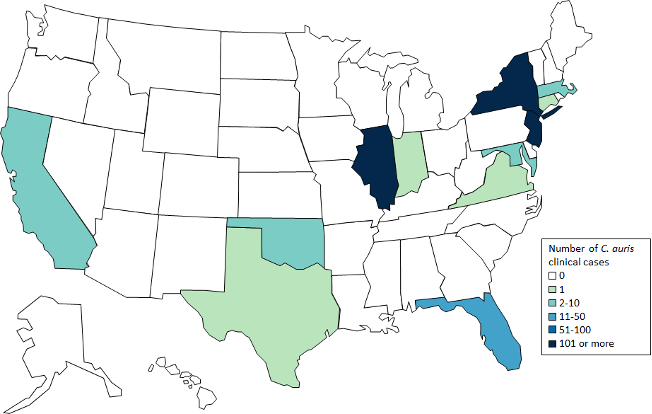 The New York State Department of Health reports that they are “working aggressively with impacted hospitals and nursing homes to implement infection control strategies for Candida auris (New York DOH, 2019).

What are the different risk factors that a patient in a critical care unit may have that a person in a regular medical unit may not have? How are these patients both at risk once they are in a hospital?