The Veterans Health Administration, commonly known as the VA, is America’s largest integrated healthcare system, with over 1,700 sites of care, serving 8.76 million Veterans each year.

Providing primary care, specialized care, and a range of medical and social support services to U.S. Veterans, the VA is also the largest provider of healthcare education and training for physician residents and other healthcare professional trainees. The VA advances medical research and development in areas that most directly address the diseases and conditions that affect Veterans and their families (DVA, 2014).

VA services are provided to all Veterans who:

The VA is working to better respond to Veterans’ needs. New programs provide treatment for traumatic brain injuries, posttraumatic stress, suicide prevention, military sexual trauma, women Veterans, and more. VA has opened outpatient clinics and established telemedicine and other services to accommodate a diverse Veteran population. The VA participates in joint initiatives with other agencies in ongoing medical research and innovation to improve the lives of Veterans.

In recent years, the VA has expanded its services by opening new medical centers and increasing the number of community-based outpatient clinics to improve Veterans’ access to services. VA programs reduced the backlog of disability claims by 36% and reduced Veteran homelessness by over 24% between January 2010 and January 2013 (DVA, 2014).

The VA opened its first new medical center in 17 years in 2012 and, since January 2009, increased the number of community-based outpatient clinics by 55 to improve access for Veterans. The VA Strategic Plan for FY 2014–2020 builds on past accomplishments and drives further improvements in the delivery of benefits and services to Veterans. It maintains a focus on increasing access to VA benefits and services; reducing, and ultimately, eliminating the disability claims backlog in 2015; and ending the rescue phase of Veteran homelessness, also in 2015.

Not all Veterans live within a reasonable distance of a VA health center. Rural communities lack services. For this reason, the Veterans Choice Program was created.

The Veterans Choice Program is a benefit that allows eligible Veterans to receive healthcare in their communities rather than waiting for a VA appointment or traveling to a VA facility. The American Medical Association (AMA) is committed to connecting physicians with information, tools, and training materials to help assess and treat our nation’s Veterans and their families. The AMA strongly supported the passage of the Veterans Access, Choice, and Accountability Act of 2014, which is designed to address challenges of the workforce and extend access to care at the VA. Veterans are eligible for the program if they (1) are unable to received timely care—defined as wait times of more than 30 days, or (2) live too far away from a VA facility (defined as more than 40 miles).

The Veterans Choice Program is making it easier for thousands of Veterans to receive their healthcare from providers outside of the VA system.

Patient-Centered Community Care (PC3) is a VA program to provide Veterans with access to some types of medical care when the local VA medical facility cannot readily provide that care; for example, this may be because there isn’t an appropriate specialist at the local VA medical center or clinic. Eligible Veterans can receive access to primary care, inpatient specialty care, outpatient specialty care, mental health care, limited emergency care, and limited newborn care for enrolled female Veterans following the birth of a child.

The TRICARE program supports healthcare providers’ work with service members and Veterans who are retired from the military by reimbursing for medical and behavioral health services provided outside of a military treatment facility. TRICARE is a part of the Military Health System, under the auspices of the Assistant Secretary of Defense for Health Affairs. It covers an ever-growing 9.5 million beneficiaries, including active duty members and families of the Army, Navy, Marine Corps, Air Force, and Coast Guard, as well as retirees from each of the above services and their families. TRICARE utilizes direct care in military treatment facilities as well as participating civilian healthcare professionals.

In rural communities, gaining access to Veterans’ healthcare services can be difficult. When those services come to patients on wheels, life gets a little more convenient. 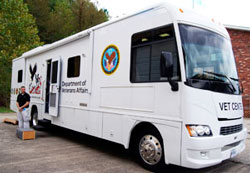 Counseling sessions are one of the most important resources available at the Mobile Vet Centers which are equipped with videoconferencing equipment as well as WiFi and DVD hardware. Source: va.gov.

The mobile vet centers (MVCs) of the Department of Veterans Affairs provide readjustment counseling and information resources to Veterans across the country. Like community-based vet centers, mobile vet centers focus on services that help Veterans make the difficult transition between military and civilian life.

Resembling super-sized recreational vehicles, the 50 vans are driven to far-reaching rural areas to provide Veterans with services such as counseling for posttraumatic stress disorder and military sexual trauma, bereavement counseling, marriage and family counseling, and resources such as VA benefits information and suicide prevention referrals.

Jesse Davis made use of mobile vet services in a different way. He came to the vet center in Morgantown, WV, for employment assistance and was promptly hired as the driver for their mobile vet center.

Davis’ experience as a seven-ton truck driver in the Marine Corps helped him qualify to drive the 38-foot long mobile vet vehicle. Since his employment, Davis has traveled to West Virginia, Pennsylvania, and Washington, DC, to help Veterans with VA information and referrals.

Stigma as Barrier to Veterans Getting Services

A 2012 survey of 1,200 West Virginia Veterans found that stigma surrounding treatment for mental health prevents many Veterans from seeking help. The survey found that those Veterans with the highest risk of committing suicide are the least likely to seek medical or mental healthcare. A 2011 study of 577 combat Veterans who were screened positive for posttraumatic stress disorder, depression, or generalized anxiety disorder 3 months after returning from Iraq, published in the Journal of Nervous and Mental Disease, found that negative views about treatment and, to a lesser extent, stigmatizing views of others’ mental health problems were related to reduced interest in receiving help. Internal barriers to help seeking, such as not recognizing a problem or holding negative attitudes about mental health care and the people who seek it, may be difficult to overcome (VHA, 2012).

Military service members are exposed to significant traumas. It is important that these individuals believe it is acceptable to receive mental health treatment (Miggantz, 2014).

Launched by the Defense Centers of Excellence for Psychological Health and Traumatic Brain Injury (DCoE) in 2009, The Real Warriors Campaign is a multimedia public awareness campaign designed to encourage help-seeking behavior among service members, Veterans, and military families coping with invisible wounds. The campaign is an integral part of the Defense Department’s overall effort to encourage warriors and families to seek appropriate care and support for psychological health concerns.