1. Part I: Etiology and Epidemiology of HIV/AIDS 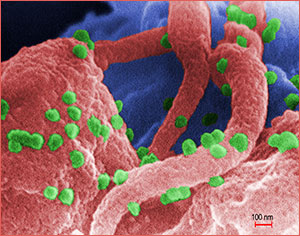 Epidemiology is the study of how disease is distributed in populations and the factors that influence the distribution. Epidemiologists try to discover why a disease develops in some people and not in others. Clinically, AIDS was first recognized in the United States in 1981, including the state of Washington. In 1983 HIV was discovered to be the cause of AIDS. Since then, the number of AIDS cases has continued to increase both in the United States and in other countries.

The Washington State Department of Health collects surveillance data and publishes a report twice a year. In Washington State from 2011 to 2015 more than 20,000 people were diagnosed with HIV and over 6,700 died as a result. The number of new cases in the state has recently seen a small decrease: between 2011 and 2015 new cases decreased from 570 to 470 persons per year. At the end of 2015 more than 12,500 people across the state were living with HIV, and the majority (44%) were black males, with the highest incidence in King County (WDOH, 2016). These reports are available on the Department’s website.

HIV and AIDS Cases Are Reportable in WA

The purpose of disease reporting and surveillance is to: