Mark is a 62-year-old white male who works in an auto assembly plant in Kentucky. He was seen in his primary physician’s office reporting shortness of breath on exertion, fatigue, and dizziness for the past month. Mark has hypertension and has been on Lisinopril 10 mg tab once daily. His vital signs are 148/90, pulse 88, respirations 22, tympanic temperature 98.8, and Sp02 93.

Of note, he was short of breath walking into the clinic and smells of cigarette smoke. Upon physical exam, his heart sounds are audible without murmurs or dependent edema in his legs. He does have congested and tight lung sounds bilaterally with expiratory crackles. He has been smoking two packs of cigarettes daily for 20 years. With his smoking history and current clinical symptoms, what is the suspected diagnosis?

The scenario is unfortunately all too common for people with chronic obstructive pulmonary disease. As the healthcare professional, what would you do first? Is this a medical emergency? What diagnostic tests should be completed? What is the probable diagnosis? What were the patient’s risk factors?

Chronic Obstructive Pulmonary Disease (COPD) is a group of chronic and irreversible respiratory diseases characterized by airway obstruction or restriction. It is not contagious or curable. COPD was the third leading cause of death in the United States in 2014 (NCHS, 2016). Correct diagnosis and management is important for quality of life and prevention of early death for approximately 26 million patients with COPD in the United States and, according to the Global Burden of Disease Study, 251 million cases of COPD globally in 2016 (NHLBI, 2012; WHO, 2018).

According to the Centers for Disease Control and Prevention (CDC), more than 143,000 U.S. adults die annually from COPD (CDC, 2015). The figure below shows age-adjusted prevalence of COPD among adults in the United States during 2014. The prevalence of COPD varies considerably by state, from <4% in Hawaii, Colorado, and Utah to >9% in Alabama, Tennessee, Kentucky, and West Virginia. The states with the highest COPD prevalence are clustered along the Ohio and lower Mississippi Rivers. 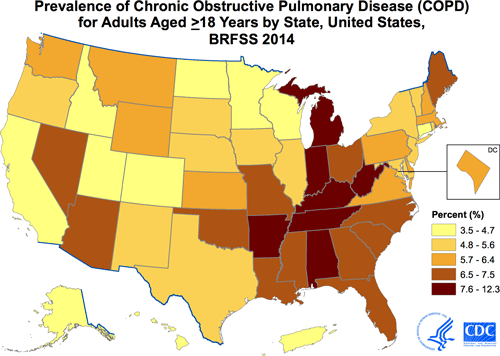 Data source: CDC Behavioral Risk Factor Surveillance System (BRFSS), 2014. COPD based on an affirmative response to the question, “Has a doctor, nurse or other health professional ever told you that you have COPD, emphysema, or chronic bronchitis?” Prevalence age-adjusted to the 2000 US standard population.
Source: CDC, 2015.

COPD is characterized by inflammation of the airways and severe air flow restriction both in and out of the lungs. COPD is an umbrella term that includes chronic bronchitis, emphysema, and asthma. Some people may have combinations of COPD and emphysema or COPD and chronic bronchitis. It is generally caused by long-term exposure to environmental irritants such as cigarette smoke, second-hand smoke, air pollution, fumes, and wood smoke.

Although the overall term for each of these diseases is COPD, clinicians refer to COPD as a specific disease process, most commonly seen among long-term cigarette smokers with chronic airway obstruction from inflammation. COPD can also be further described as obstructive or restrictive.

A key characteristic with any type of COPD is limited airflow, which results in hypoxia and carbon dioxide retention. The person who has COPD doesn’t have full ability to exhale as alveoli loose elasticity, resulting in poor exchange of oxygen and carbon dioxide. As a result, the alveoli often overinflate and the chest becomes expanded with retention of carbon dioxide.

Emphysema is a type of COPD that shares the clinical symptoms of shortness of breath and airway obstruction. Commonly seen in people with a long-term history of smoking, it is noted uniquely in the clinical presentation as a “pink puffer.” The term comes from the clinical appearance of patients with emphysema, who, with the increased work of breathing, have a flushed appearance from lack of oxygen and poor cardiac output. The damage is deep within the lungs, arising from overinflated alveoli where air has become trapped because of the inability to exhale the carbon dioxide.

Chronic smoking damages the flexibility of the alveoli, making them stiff and ineffective. Originally small air sacs, alveoli become stretched and floppy and thus less effective in moving oxygen into and out of the capillaries. Often because the work of breathing takes all their energy, people with COPD become exhausted while eating, so they experience weight loss as well as muscle wasting due to the lack of oxygen. Emphysema has also been called “COPD Type A.”

The data on emphysema indicate that 90% of cases are seen in people over the age of 45 (ALA, 2017). Rates of diagnosis have been increasing among women, showing trends of COPD now equalizing among women and men.

Chronic bronchitis is a type of COPD characterized by inflammation, airway irritation, and mucus buildup in the main bronchus. The clinical diagnosis is defined as “persistent cough that produces phlegm and mucus, for at least 2 months per year, in 2 consecutive years” (ALA, 2017). Symptoms include chronic cough that attempts to rid the airway of thick mucus and phlegm. There are two types of bronchitis, acute and chronic. Acute bronchitis is generally caused by colds and flu. The temporary infection causes inflammation, with irritation to the bronchus and bronchioles, and results in coughing and shortness of breath. 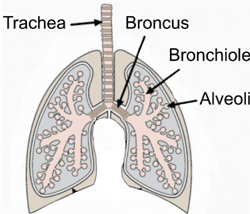 Women have chronic bronchitis at twice the rate of men (Pietrangelo, 2015). Age increases the risk for COPD, as people over age 65 have a rate of 64.2 per 1,000 persons compared to the age group of 18 to 44 in which the rate drops to 28 per 1,000 (ALA, 2017). Prevalence trends also reveal that non-Hispanic whites have a higher risk than African American blacks and Hispanics.

Chronic bronchitis is also characterized by cough; however it does not go away with antibiotics or treatment because it is caused by smoking or other environmental pollutants such as dust, air pollution, or unsafe work environments where coal, asbestos, or other irritants inflame delicate respiratory tissues. Although acute bronchitis can be remediated with pharmacologic interventions and time for healing, there is no cure for chronic bronchitis. Treatment is focused on relief from annoying cough symptoms and supporting the airway. Bronchodilators are the mainstay of therapy.

Asthma and COPD may result in the same air flow resistance, but whereas the cause of COPD is generally smoking, asthma is caused by other respiratory irritants such as air pollution or environmental triggers like dust, molds, pet dander, and more. Asthma is a form of COPD characterized by spasms of the bronchi in the lungs leading to an overreaction and spasm of the bronchial airways. Normally the bronchiole tubes dilate and constrict depending on nervous system messages; however, in asthma the bronchus and bronchiole tubes constrict and overreact to environmental and even emotional triggers, causing severe difficulty with breathing and airflow.

Asthma is characterized by wheezing from a restricted air flow, chest tightness, and increased mucus from the inflamed airways, which worsens the restriction and impedes air flow. Unlike emphysema, which is seen in older patients with a history of years of smoking, asthma is seen in people of all ages and often first manifests during childhood.

When asthma develops in young children, it may often resolve on its own as the child’s respiratory system develops and matures. Other children may continue to suffer from asthma for the rest of their lives and require maintenance medications to keep the airways open.

There has been a correlation between asthma and eczema, indicating an autoimmune response. Combinations of eczema (atopic dermatitis) and allergic rhinitis indicate a risk for developing other allergies and asthma as immunoglobulins (antibodies) respond to the allergen. A body defense to high levels of immunoglobulins is to close the airways in order to prevent the invading pathogen from further entering into the body.

In the case of asthma, this natural defense mechanism becomes the problem, as airways spasm and even threaten to close. For many children with asthma, there is a genetic link to a deficiency of a protein in the skin, which normally helps strengthen the skin from pathogens and allergens. Without the protein, the skin is more irritated by environmental allergens and microbes and the body responds quickly with hives, eczema, and the resulting antibodies (AAAAI, 2016).

Asthma affects 25 million people in the United States and is the most common chronic disease of childhood. As high as 95% of patients with asthma also suffer from chronic rhinitis (Glass, 2014).

In our earlier scenario, the diagnosis of COPD was determined. What symptoms did he present with and what were his risk factors? What were the triggers that caused the COPD? What type of COPD does he have?

What conditions are included in the definition of COPD?