3. Anatomy and Physiology of Breathing

It is important to understand the normal anatomy and physiology of breathing in order to identify the causes and results of COPD. Understanding the pathophysiology of ventilation will also help you understand the mechanisms of action of the pharmacologic interventions designed to open the airways.

Anatomy of the Lungs

The respiratory system is divided into the upper airway and the lower airway. The upper airway includes the nose, nasal and oral pharynx, epiglottis, and larynx (also known as the “voice box” or “Adam’s apple”). Below the larynx is the lower airway, consisting of the trachea, bronchus, and bronchiole tubes, which further divide like branches of a tree into smaller bronchioles and then end with small air sacs called alveoli.

At the alveolar level, capillaries, the smallest vessel that connects arteries and veins, surround the alveoli and exchange oxygen for carbon dioxide. When the bronchioles and alvioli become constricted, full of mucus and less able to expand and dilate, air becomes trapped and gases are not exchanged. This creates a pressure that can make the lungs stiff and unpliable, causing the resultant barrel chest seen in many patients with COPD. 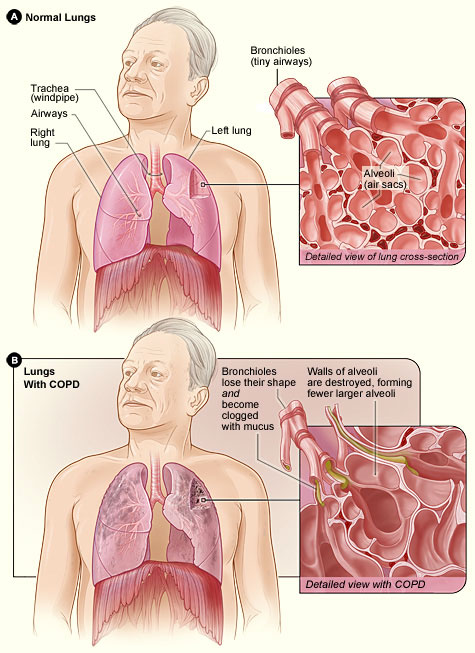 The tissue of the bronchiole tubes contain two major receptors for the nervous system—the muscarinic and beta receptors. Muscarinic receptors cause smooth-muscle contraction, making the lumen (opening) of the bronchiole tube smaller. In contrast, the beta receptors cause relaxation of the muscle and thus bronchodilation. Ideally, the goal for people with COPD is to increase beta receptor activity (dilation of airways) and inhibit muscarinic receptors. The two main classes of medications act on these receptors. Because people with COPD also have inflammation of the airways, a third major pharmacologic mechanism to change this cycle of airway over-reactivity is an anti-inflammatory such as inhaled corticosteroids.

COPD is caused by a bronchoconstriction and inflammation, making air passage in and out of the lungs more difficult. This reduction in effective air flow creates a state of hypoxia, resulting in hypoxemia. As noted earlier, chronic bronchitis is a chronic productive cough lasting 3 months during 2 consecutive years. Emphysema is a permanent enlargement of the alveoli, which prevents normal elastic recoil during respiration.

People with asthma develop an obstruction of the airway and air flow. Those with asthma who have a reversible air flow obstruction are not considered to have COPD; however, when the air flow remains chronically obstructed, and is not reversible, they are diagnosed with COPD (Jarvis, 2015).

The lungs become scarred from chronic inflammation and irritation caused by mucus buildup as the lungs attempt to protect themselves from environmental irritants such as smoke. This cycle of irritation, inflammation, and attempts at recovery continue until the compensation efforts create disruptive symptoms that drive the patient to seek medical care. A productive cough with mucus is an effort of the lungs and trachea to rid themselves of the irritant; however, the mucus may soon become a problem in itself, and is sometimes known as a “smoker’s cough.”

[Material in this section is from smokefree.gov 2018 unless otherwise cited.]

Smoking, the number one cause of COPD, destroys the cilia (fine hairs) in the bronchiole tubes and trachea that are supposed to push foreign substances and pathogens from the lower airway into the upper airway so they can be expelled by a cough. Pathology from smoking affects not only the lungs but also the circulatory system (Glass, 2014). Nicotine paralyzes the cilia, and the tar within cigarettes or cigars further destroys their integrity.

Additionally, the chemicals in cigarette smoke create nicks within the fine endothelial lining of the arteries throughout the body, leaving places for cholesterol and fat to build up. Generally, the public is aware of cigarette smoking as the most common cause of lung cancer; however, most people are unaware of the damage to the circulatory system, which is also the most common cause of atherosclerosis, or narrowing of the arteries.

Further, nicotine competes with oxygen in the formation of new red blood cells, which can lead the blood to become thick and sticky, forming atherosclerotic plaques that narrow arteries and hinder blood flow. The surface of a bulging atherosclerotic plaque sometimes tears, exposing material that stimulates clot formation. Clots and ruptured plaque material can then break away from the wall, be carried by the blood, and clog arteries downstream.

Atherosclerosis can damage tissues throughout the body:

Smoking affects each body system as it reduces the oxygen supply to tissues and cells. Within the brain it becomes an addictive substance, as strong as heroin. Nicotine and tar reduce the oxygen supply to the cochlea of the inner ear, causing hearing loss, and retinas of the eyes, which may lead to macular degeneration and blindness. The loss of skin elasticity due to smoking can lead to accelerated wrinkles, dull skin tone, and dryness.

At the cellular level, DNA is disrupted by the nicotine and tars from smoking, which can lead to uncontrolled mutations in cellular replication known as cancer. One-third of all cancer deaths are caused by tobacco and smoking. Cancers of the mouth and throat are caused by smoking. In addition to disruptions in normal DNA creation of proteins, hormones disruptions result in lowered estrogen and testosterone levels, thyroid problems, and reproduction issues.

Alveoli of Smoker and Non-Smoker 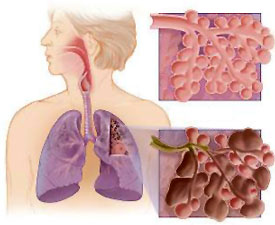 Upper right: This image shows the clear pink alveoli of a non-smoker without COPD; lower right: this image reveals the hyperinflation and clogging of the alveoli from COPD, which makes gas exchange much less effective.
Source: Wikimedia Commons.

Within the circulatory system, both white and red blood cell counts stay elevated in smokers. High white blood cell counts indicate that the body is in a state of infection, a continuing cycle of inflammation with attempts to repair itself. Overproduction of red blood cells in the bone marrow places stress on other body systems. In the skeletal system there is a higher risk for osteoporosis (loss of bone density), which can lead to fractures. Muscle pains and weakness are more common among smokers that non-smokers. Healing bones, muscles, and skin take much longer without adequate oxygen.

In addition to the nicotine, manufacturers have added heavy metals and other debris, chemicals, fuels, and flavorings (including formaldehyde, used in embalming a corpse) to their products with each of their own adverse effects on the body.

According to Stanton Glantz, who directs the UCSF Center for Tobacco Control Research and Education,

E-cigarettes are widely promoted as a smoking cessation aid but for most people they actually make it harder to quit smoking; so, most people end up as so-called dual users who keep smoking while using e-cigarettes. The new study shows that the risks compound. Someone who continues to smoke daily while using e-cigarettes daily has an increased risk of a heart attack by a factor of five. (LaMotte & Scutti, 2018)

Mark has discovered that the result of 20 years of smoking has compromised his lungs’ ability to inhale and exhale. Unfortunately, his symptoms of shortness of breath and persistent cough were his only indicators. Mark’s provider will order additional diagnostic studies to confirm the diagnosis, including a spirometry, lab tests to establish a baseline, and a chest x-ray.

What is the pathology of COPD within the bronchioles?

What can you teach people who smoke about the effects of smoking on their lungs and arteries?