Home » CBD: Weeding Through the Controversy

CBD: Weeding Through the Controversy

CBD: Weeding Through the ControversyPage 4 of 8

The cannabis plant has been used for thousands of years, and through those years over 700 varieties have been developed and are available.

Pharmaco-dynamics and -kinetics of CBD 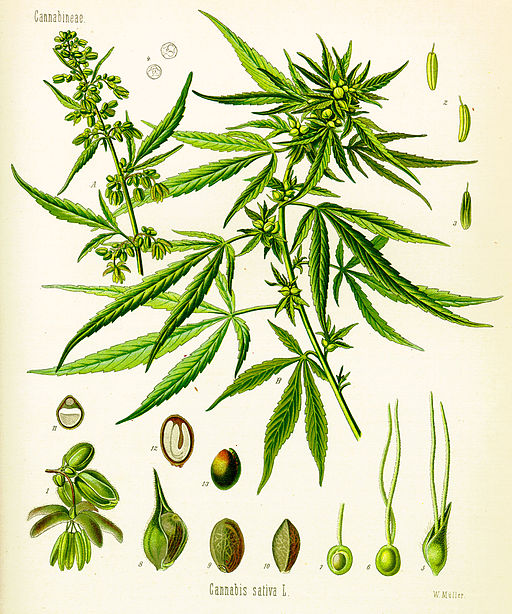 Cannabis has hundreds of chemical components, but the active ingredients in this plant used by people are THC and CBD. When the leaves of this botanical are rolled and smoked it is generally known as marijuana. When the cannabis plant is harvested, CBD is one of the various components that are extracted out. Parts of the plant have been used throughout history: the fibrous portion, the leaves, the buds, and so on.

CBD comes from a portion of the cannabis plant known as hemp. A history of hemp reveals it has been indigenous to Central and South Asia, where its fibers  were used for fabric and rope. In the Neolithic age hemp was known in China and Japan. Thomas Jefferson wrote the Declaration of Independence and the U.S. Constitution using hemp paper (Price, 2015). Hemp has been used for millennia as wax, resin, paper, fuel, and clothing.

THC and CBD are similar molecules within the cannabis plant but they act differently within the human body. Pharmacodynamics refers to the way the body reacts and pharmacokinetics to how the body impacts the drug. 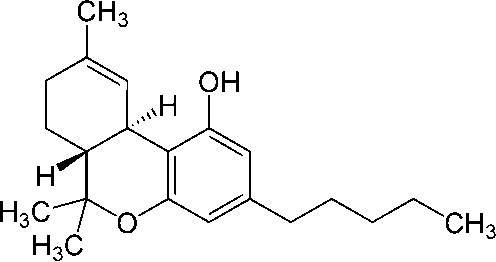 Chemical Structure of CBD has a slightly different structure in the main H3C bond that prevents the psychiatric response. Source: Courtesy of Wikimedia Commons. Public domain.

Understanding the action of the cannabis plant on the human body was revealed with the discovery of the endocannabinoid system in the human body. Natural cannabinoid CB1 and CB2 receptors are located throughout the body, especially focused near the nervous system, which may explain why the psychodynamic properties are helpful for analgesia and pain control. Whereas THC binds to the CB1 receptors to produce a euphoric feeling, CBD does not. CBD has been shown to act as a serotonin receptor partial agonist, which may also explain its relaxation and sleep-inducing properties (Laun et al., 2018).

Features of the whole cannabis plant are aromatic compounds known as terpenes. When the whole cannabis plant is used, it contains the cannabinoids, terpenes, and flavonoids found in fatty cells of the plant. Terpenes attract pollinators such as bees, and give flowers, herbs, and plants their unique aromas and flavors. Because of these features, terpenes are often used in cosmetics and aromatherapy. These features make CBD favorable for creams and cosmetic products. When the whole plant is used, all of these elements work together in a magnified benefit known as the entourage effect (Russo, 2011).

Because CBD is a fat-soluble chemical, it binds easily with oils and is easy to consume in a variety of products. Currently studies show promise that CBD is effective as an anti-inflammatory and anti-seizure, but we don’t know enough yet about how it works in the brain and what dosages are most appropriate.

Endocannabinoids were identified in the 1950s by a scientist who discovered they were internal, natural chemicals, with unique receptors (eg, brain, connective tissues, glands, immune system organs, and cells) throughout the body of mammals. Like other body systems, they work to keep the body in a state of homeostasis. It is believed that pain and inflammation result when the body is out of balance, which is why CBD has been shown to be especially helpful as an analgesic and anti-inflammatory (Kaur et al., 2016). The CBD binds with the C1 or C2 receptors to block the inflammatory response.

Endogenous cannabinoids with their receptors, mainly types 1 and 2, are known as the endocannabinoid system. It is closely related to the nervous system and impacts sensations of pain, anxiety, pleasure, and even inflammation. The distribution, synthesis, transportation, and degradation of the cannabinoids determine the effect on the body of the various cannabis products (Klumpers & Thacker, 2019).

Endocannabinoids act like keys in the locks of the receptors. The THC molecule fits nicely into the C1 and C2 receptors that respond to anxiety and stress, blocking their responses, and producing calm and even euphoria. CBD only fits the receptors blocking anxiety and stress response; it does not fit those that produce the euphoric sensation (the “high”) of THC.

Research has determined that endocannabinoids have a pathology in many neurologic conditions and synthetic modulators of this system could be used in a protective role in disorders such as emesis, pain, inflammation, multiple sclerosis, anorexia, epilepsy, glaucoma, obesity, Parkinson’s disease, Huntington’s disease, Alzheimer’s disease, and Tourette’s syndrome. Much research is needed to confirm and quantify therapeutic doses. Currently, there are very limited recommendations for dosage except for Epidiolex, which is used for childhood seizures and synthetic drugs.

How would you explain to your patient why CBD doesn’t make someone “high” like marijuana?