The latest coronavirus to emerge is COVID-19, also known as severe acute respiratory syndrome coronavirus 2. On December 31, 2019, WHO was alerted by Chinese authorities to a series of pneumonia-like cases in Wuhan, a city the size of London with about 11 million people. It was quickly discovered that the first human infections likely originated from Huanan Seafood there. Two weeks later, a group of Chinese scientists, along with WHO, announced that a new coronavirus, identified through genomic sequencing, was the cause of the pneumonia (Seah et al., 2020).

COVID-19 was initially thought to be a virus with mainly animal to human transmission. This was proven to be untrue when the number of cases surged over the weekend of January 18 and 19, 2020, and reports surfaced of healthcare workers being infected (Seah et al., 2020).

COVID-19 is a beta coronavirus, like MERS and SARs, both of which have their origins in bats. The genetic sequences from U.S. patients are similar to the one that China initially posted, suggesting a likely single, recent emergence of this virus from an animal reservoir (CDC, 2020e).

The virus has since spread beyond Wuhan to other Chinese cities and to multiple countries, including the United States. According to National Institutes of Health (NIH) officials, “While the trajectory of this outbreak is impossible to predict, effective response requires prompt action from the standpoint of classic public health strategies to the timely development and implementation of effective countermeasures” (NIH, 2020c).

Key events in the 2019-nCoV outbreak. From nature.com. Public domain.

In a CDC telebriefing on February 14, CDC’s Messonnier said, “Based on what is now known about COVID-19, we believe this virus spreads mainly from person to person among close contacts, (defined as about six feet) through respiratory droplets produced when an infected person coughs or sneezes” (CDC, 2020c). This is similar to the way influenza and other respiratory pathogens spread. These droplets can land in the mouths or noses of people who are nearby or possibly be inhaled into the lungs.

A July 9, 2020 scientific brief from WHO titled Transmission of SARS-CoV-2: implications for infection prevention precautions, indicates that infectious particles much smaller than droplets can become airborne and remain suspended in the air for long periods of time. These so-called "aerosol particles" appear to be capable of infecting people who inhale the aerosolized particles. WHO reports that outbreaks related to activities in crowded, enclosed spaces "suggest the possibility of aerosol transmission, combined with droplet transmission" during activities such as choir practice, in restaurants, and in gyms. 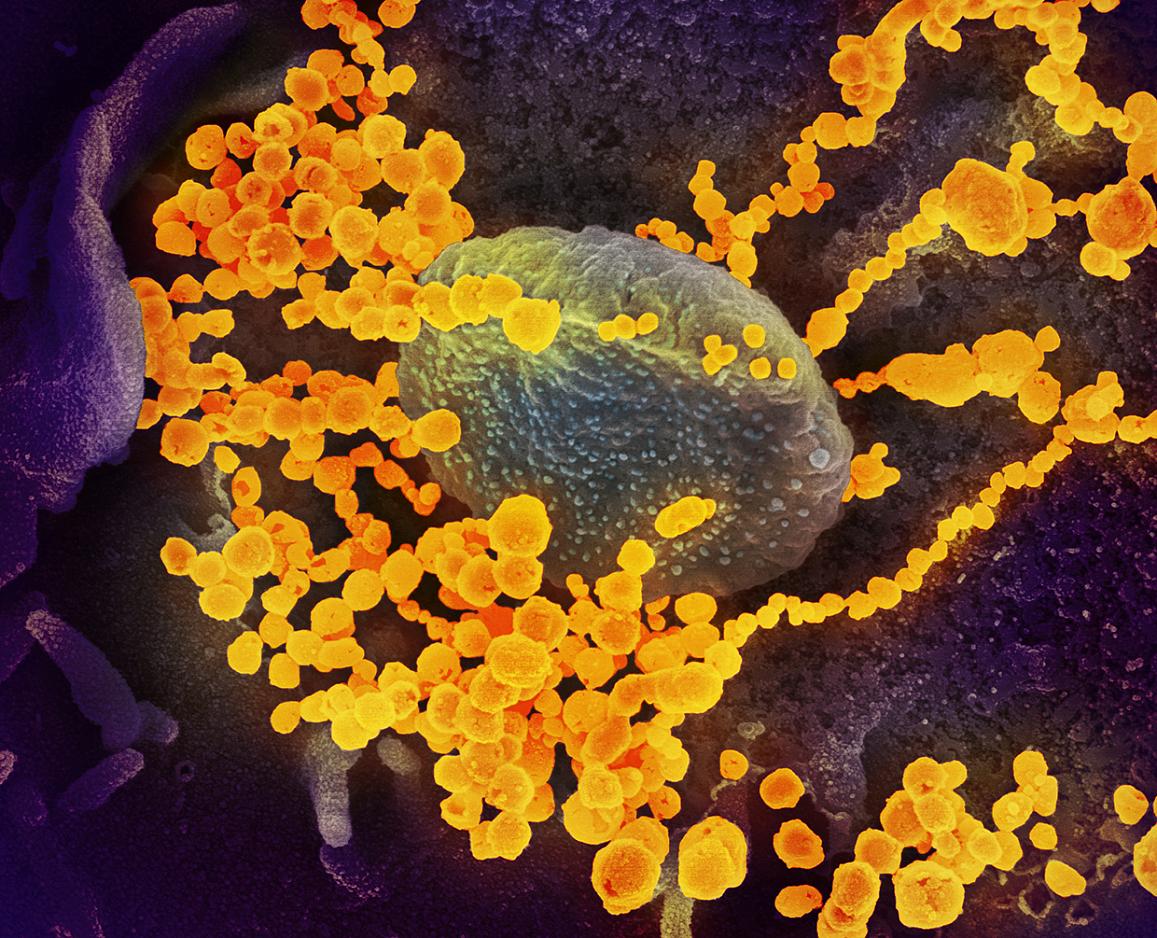 This scanning electron microscope image shows SARS-CoV-2 (round gold objects) emerging from the surface of cells cultured in the lab. SARS-CoV-2, also known as 2019-nCoV, is the virus that causes COVID-19. The virus shown was isolated from a patient in the U.S.NIAID-RML. Source: NIH.

Scientists initially believed the new coronavirus was mainly spread by people who were exhibiting symptoms of the disease. It is now known that COVID-19 can be spread by asymptomatic people. It is many times more contagious than the flu and up to 25% of infected individuals never develop symptoms.

Those who do develop symptoms appear to be “shedding significant virus in their oropharyngeal compartment”, up to 48 hours before developing symptoms. “This helps explain how rapidly this virus continues to spread across the country, because we have asymptomatic transmitters and we have individuals who are transmitting 48 hours before they become symptomatic”, said CDC Director Robert Redfield.

It is important to note that the ease with which a virus spreads from person-to-person can vary. Some viruses are highly contagious (like measles), while other viruses are less so. There is much more to learn about transmissibility, severity, and other features associated with COVID-19 and those investigations are ongoing (CDC, 2020g).

The risk for COVID-19 illness increases with age. In studies from multiple countries, there is a pivot point around 50 years old, after which the risk of severe and fatal illness increases steadily and rapidly with each additional year of age. Older people may be more likely to die of COVID-19 for a variety of reasons, including the presence of other chronic conditions and age-related changes in the immune system (Weekly Science Review June 6-12, 2020).

As more information has become available, research has confirmed that the risk of spread increases dramatically through extended, close contact with an infected person. Person-to-person interactions, especially in crowded, poorly ventilated spaces are a major culprit. Shouting, singing, or any other activity that spreads respiratory droplets--even talking loudly--are efficient ways to spread the virus.

The virus that causes coronavirus disease 2019 (COVID-19) is stable for several hours to days in aerosols and on surfaces, according to a new study from National Institutes of Health, CDC, UCLA, and Princeton University. The scientists found that severe acute respiratory syndrome coronavirus 2 (SARS-CoV-2) was detectable in aerosols for up to three hours, up to four hours on copper, up to 24 hours on cardboard and up to two to three days on plastic and stainless steel. The results provide key information about the stability of SARS-CoV-2, which causes COVID-19 disease, and suggests that people may acquire the virus through the air and after touching contaminated objects (NIH, March 17, 2020).

The NIH scientists compared how the environment affects SARS-CoV-2 and SARS-CoV-1, which causes SARS. SARS-CoV-1, like its successor now circulating across the globe, emerged from China and infected more than 8,000 people in 2002 and 2003. SARS-CoV-1 was eradicated by intensive contact tracing and case isolation measures and no cases have been detected since 2004. SARS-CoV-1 is the human coronavirus most closely related to SARS-CoV-2. In the stability study the two viruses behaved similarly, which unfortunately fails to explain why COVID-19 has become a much larger outbreak (NIH, March 17, 2020).

Two additional questions arose from this study: (1) If the viability of the two coronaviruses is similar, why is SARS-CoV-2 resulting in more cases? Emerging evidence suggests that people infected with SARS-CoV-2 might be spreading virus without recognizing, or prior to recognizing, symptoms. This would make disease control measures that were effective against SARS-CoV-1 less effective against its successor, and (2) In contrast to SARS-CoV-1, most secondary cases of virus transmission of SARS-CoV-2 appear to be occurring in community settings rather than healthcare settings. However, healthcare settings are also vulnerable to the introduction and spread of SARS-CoV-2, and the stability of SARS-CoV-2 in aerosols and on surfaces likely contributes to transmission of the virus in healthcare settings (NIH, March 17, 2020).

Deadliness of the Virus

In order to determine how deadly COVID-19 is, scientists must know how many people have been infected. As of June 22, 2020, more than 9,000,000 infections and nearly 470,000 deaths have been reported worldwide making the death rate more than 6 percent. Epidemiologists caution however that there may be tens of thousands more who have been infected who may not have seen a doctor and others who were never tested. There may also be deaths that were not reported or not attributed to the coronavirus, making an estimate of fatality challenging.

Case counts for COVID-19 can be misleading: reliable data suggest that the vast majority of infections in the United States have not been diagnosed, and that the true number of COVID-19 infections is much higher than the case count total indicates. Consensus estimates of the true number of people who die from COVID-19 are around .0.5% to 1%, or one in 100-200 people infected. Based on the .8% infection fatality rate, which is our best estimate in the US, we would expect 112,000 deaths to result from 14,000,000 COVID-19 cases. This suggests that only 14% of US COVID-19 cases have been detected (COVID 19 Insights June 11, 2020).

A May 14, 2020 discussion of COVID-19 death rates published by a team of developers and researchers at Worldometer, noted that due to the large number of asymptomatic cases (and lack of testing), actual case may be as much as 10 times higher than the reported confirmed cases. The report estimates that the actual death rate is likely almost twice the number of confirmed deaths.

Based on data from New York City, researchers at Worldometer estimate an infection mortality rate of 1.4% (percent of people infected with COVID-19 having a fatal outcome) (Worldometer, May 14, 2020).

For confirmed COVID-19 infections, reported illnesses have ranged from people with little to no symptoms to people being severely ill and dying. Symptoms may appear 2-14 day after exposure. People with these symptoms or combination of symptoms may have COVID-19:

Or at least 2 of these symptoms:

According to Sylvie Briand, head of WHO’s Global Infectious Hazard Preparedness division, as more information is received from China, there is a better understanding of the new coronavirus. “More than 80% of patients have mild disease and will recover. In about 14% of cases the virus causes severe disease including pneumonia and shortness of breath, and about 5% of patients have critical diseases including respiratory failure, septic shock, and multi-organ failure.” About 2 percent of cases are fatal. The risk of death increases as a person gets older and, according to Dr. Briand, there have not been many cases among children (WHO, 2020c).

In a case review of presenting characteristics, comorbidities, and outcomes involving 5,700 hospitalized patients in New York City, researchers found the most common comorbidities were hypertension, obesity, and diabetes. Among patients who were discharged or died, 14.2% were treated in the intensive care unit, 12.2% received invasive mechanical ventilation, 3.2% were treated with kidney replacement therapy, and 21% died (JAMA Network, April 22, 2020).

What Actually Happens If You Get Coronavirus? [8:39]