Acetaminophen: When It Becomes DangerousPage 4 of 9

One recent study showed that of all the acetaminophen-caused acute liver failures (ALF), about 42% were due to patients intending self-harm and 48% were due to overdoses that were unintentionally taken (Hodgman & Garrard, 2012). Another study by the Acute Liver Failure Study Group found that nearly 50% of ALF occurrences were due to acetaminophen overdose (NIH, 2013; Thomas, 2018).

A recent study of acetaminophen-caused liver failure indicated that:

Acetaminophen has a narrow safety margin and taking just a small amount of the drug over the traditionally recommended total daily dose (4 grams per day) may lead to liver injury. The recommended doses and tablet strengths of acetaminophen leave little room for error, and the onset of liver injury can be hard to recognize. There is scientific agreement that taking a large amount of acetaminophen over a short period of time causes liver injury, but there are varying views on the specific threshold for toxicity (Thomas, 2018).

Some people may be especially prone to liver injury from acetaminophen, and the maximum amount of acetaminophen that can be safely ingested may not be the same for everyone. Some individuals, especially children, elders, and those who use alcohol, have liver disease, suffer from anorexia nervosa, or are fasting, may have a greater susceptibility to the effects of the toxic metabolite produced by the breakdown of acetaminophen because they produce more of the metabolite or because they are unable to clear it from the body as easily as a healthy person.

Individuals with increased susceptibility may experience toxic effects at lower acetaminophen doses than others and rare cases of acute liver injury have been linked to amounts lower than 2.5 grams per day. More research is needed to understand how ethnicity, genetics, nutrition, or other factors play a role in making some individuals more prone to liver injury (Hodgman & Garrard, 2012; Thomas, 2018).

Because there is such a wide array of OTC and prescription acetaminophen products used in a range of doses for various indications, it can be difficult to identify the appropriate product to use or how much of the drug is being ingested. Acetaminophen is an ingredient in many widely used OTC single-ingredient products, such as those used to treat headaches, and multiple-ingredient (combination) products, such as those that treat symptoms of the common cold.

As noted earlier, acetaminophen is also a component of a number of prescription drug products in combination with narcotic pain medicines. So, consumers may attempt to treat different conditions or symptoms with multiple choices among products containing acetaminophen, not realizing that acetaminophen is an ingredient common to each and that they are at risk of an overdose (Consumer Reports, 2014). 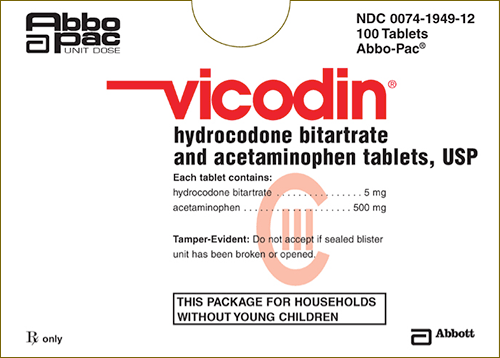 Note: No warning about overdose of acetaminophen is evident on this Vicodin label. Image Source: Wikimedia Commons.

Accidental overdoses can also occur in children because of the multiple products available that contain different strengths of acetaminophen. Liquid acetaminophen formulations intended for use in infants are typically more concentrated and therefore stronger, designed to enable dosing using less liquid. However, failure to distinguish between the two strengths of the liquid product can result in an overdose if a parent gives a higher dose of the concentrated infant drops to a young child (Budnitz et al., 2011).

The association between acetaminophen and liver injury is not common knowledge. Healthcare professionals are trained in basic pharmacokinetics and have learned that all oral drugs must pass through the liver to be metabolized. Some medications are inherently hepatotoxic and, in overdoses, many drugs can become dangerous to the liver cells.

Consumers are not sufficiently aware that acetaminophen can cause serious liver injury, and their perceptions may be influenced by the marketing of the products. Because acetaminophen has been marketed for decades, it is a familiar product that may be assumed to be completely safe. This perception may be reinforced by the fact that the drug is widely available OTC in very large quantities (ex, 500 tablets per bottle). Furthermore, advertisements of OTC products are not required to provide warning information (FDA, 2013).

Liquid acetaminophen formulations for infants are:

The onset of liver injury:

Some acetaminophen tests are inaccurate in the presence of bilirubin, N-acetyl cysteine, and ketones. Because the liver also functions to help regulate blood glucose levels, a patient who has a glucose >100 mg/dL will recover better from liver toxicity.

Finding ways to educate consumers about the risk of liver injury from acetaminophen has been difficult. Current labeling on OTC products may be overlooked or not understood, and many patients do not read the patient information provided with dispensed prescriptions. Programs to educate the public about safe use of acetaminophen have been small and have encountered a number of obstacles.

Advertisements of OTC drugs often emphasize the effectiveness of products but, unlike prescription drugs, are not required to offset such messages with warning information.

In children, these additional factors contribute to unintentional overdoses:

Acetaminophen Dosage for Children under 2 (Video 3:35)