Acetaminophen: When It Becomes DangerousPage 5 of 9

3. Liver Injury with Acetaminophen Use

Research has shown that acetaminophen is a major cause of acute liver failure in the United States. Taking more than the recommended amount of acetaminophen can cause liver damage ranging from abnormalities in liver function blood tests to liver failure and even death. There are an estimated 400 deaths each year from acetaminophen-caused liver failure (Hodgman & Garrard, 2012).

Incidence of acute liver failure (ALF) due to acetaminophen overdose:

Summarizing data related to acetaminophen-associated overdoses from 2016, there were an estimated:

Acetaminophen overdose and hepatotoxicity is the leading cause of ALF in the United States.

The liver helps break down and remove many chemicals or drugs that enter the body; however, taking too much acetaminophen overloads the liver’s ability to process the drug effectively (Jaeschke et al., 2012). The mechanism of liver injury is not related to acetaminophen itself, but to the conversion of small amounts of acetaminophen into a toxic metabolite called N-acetyl-p-benzoquinone imine (NAPQI) (Wikipedia, 2018c).

When acetaminophen is taken in therapeutic doses, this metabolite is safely broken down by the liver and then excreted in the urine; however, when liver function is impaired (eg, in alcoholics), or if an excessive amount of acetaminophen is ingested, high concentrations of NAPQI accumulate and bind with liver proteins, causing cellular injury (McGill et al., 2012). The amount of toxic metabolite produced and the ability of the liver to remove this metabolite before it binds to liver protein influence the extent of liver injury (Hodgman & Garrard, 2012).

The following may also lower the threshold for acetaminophen-caused hepatotoxicity:

An overdose of acetaminophen can seriously damage the liver. The antidote to acetaminophen overdose, N-acetylcysteine (NAC), is most effective when given within 8 hours of ingesting acetaminophen and can prevent liver failure, if given early enough, by replenishing the stores of glutathione in the liver to detoxify NAPQI. For this reason, it is absolutely necessary that acetaminophen poisoning be recognized, diagnosed, and treated as early as possible (Budnitz et al., 2011). Commercial products (eg, acetdote) are now available as the antidote.

Unfortunately, the signs and symptoms of liver damage may not be immediately apparent because they take time to appear, even in severe cases. The early symptoms of liver damage such as loss of appetite, nausea, and vomiting, may be mistaken for the flu, or for the very issue that caused the symptoms they are trying to treat with acetaminophen (Hodgman & Garrard, 2012).

The early symptoms of liver damage:

Q: What are the symptoms of liver toxicity? What expected lab tests should be done and what would you expect to see with hepatotoxicity?

A: Signs of liver disease include abnormally yellow skin and eyes, dark urine, light-colored stools, nausea, vomiting, and loss of appetite. Serious cases of liver disease may lead to mental confusion, and liver damage can develop into liver failure, coma, and death over several days.

An acetaminophen poisoning diagnosis can be determined by measuring its level in the blood. Plasma levels in an overdose of acetaminophen peak about four hours after ingestion. Acetaminophen levels are therefore usually ordered four hours from the time of suspected ingestion, although treatment is begun immediately.

The Rumack-Matthew nomogram (see figure below), first developed in 1976 at the Rocky Mountain Poison Center at Denver and since modified to indicate treatment at a lower threshold, estimates the risk of liver toxicity and injury based on acetaminophen levels in the blood within 4 hours of the known time since ingestion (Rumack et al., 2017).

The level is best determined after at least 4 hours so that any drug ingested has had a chance to be absorbed by the GI tract. This does not mean that protective measures should not be taken prior to 4 hours. A second measurement can confirm the concentration and overdose diagnosis with time.

Protective measures may include stomach lavage to remove any unabsorbed tablets, then orally administered activated charcoal to absorb any drug remaining in the stomach. This is followed by administration of NAC, either orally or intravenously, to stay clear of the stomach procedures. Since charcoal will absorb NAC, another stomach lavage may be done prior to oral administration to remove the activated charcoal (Kirchner, 2016). 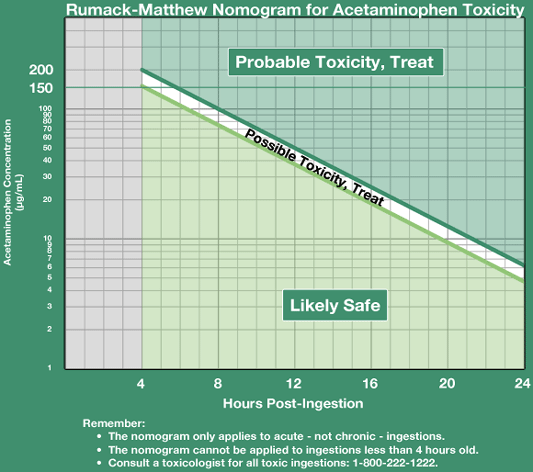 Clinical or biochemical evidence of liver toxicity may develop in 1 to 4 days, although it may appear in 12 hours for severe cases. Laboratory studies may show evidence of hepatic necrosis with elevated AST, ALT, bilirubin, and prolonged coagulation times—particularly an elevated prothrombin time (Wikipedia, 2018b).

If the acetaminophen plasma levels are high, the patient may need to be given subsequent maintenance doses of NAC. If given by IV, the loading dose is 150 mg/kg of body weight in 15 to 30 minutes; the maintenance doses are 50 mg/kg of body weight for 4 hours, and 100 mg/kg every 4 hours for the following 16 hours, with the final dose of 10 mg/kg to be repeated three times until the liver enzyme lab levels have normalized (Mahmoudi, 2014).

Anytime an overdose of any medication occurs in a hospital setting, an incident report is needed to evaluate the cause and possible prevention strategies. In addition to the clerical responsibilities of drug overdose, the emotional effects can be devastating due to guilt, especially when innocent children are involved. Patient and caregiver education is essential to help identify the causative factors, which may lead to prevention guidelines and corrective instruction. As always, an ounce of prevention in education, is better than a pound of cure, especially when it comes to accidental drug overdose.

To respond to an overdose of acetaminophen:

How is NAC given for an acetaminophen overdose? Does your clinic/hospital have access to it? Is it on your unit? What is the procedure for administration?