4. Atherosclerosis: Cause of CAD

Atherosclerosis is the disease behind the disease. When atherosclerotic processes take hold in the arteries that supply blood to the heart, the condition becomes coronary artery disease (CAD). Atherosclerosis is a degenerative disorder that injures the inner walls of large arteries. In atherosclerosis, thick abnormal patches called plaques accumulate at scattered locations along the artery’s innermost endothelial layer. The plaques are disorganized masses filled with cholesterol, lipids, and other cells, all covered by a white fibrous coating (Mitchell & Schoen, 2009).

Atherosclerotic plaques narrow an artery and hinder blood flow. The result is that the surface of a bulging plaque sometimes tears, exposing material that stimulates clot formation. Clots and ruptured plaque material can then break away from the wall, be carried by the blood, and clog arteries downstream.

Atherosclerosis damages tissues throughout the body:

Beginning in childhood, a cascade of events slowly and quietly leads to the development of atherosclerosis. Children develop fatty streaks along the walls of their large arteries largely from diets high in fat. These streaks are sites where lipoprotein particles are protected from direct contact with the blood. The lipoproteins become oxidized into destructive molecules and the resulting oxidants injure nearby cells.

In the arterial walls, leukocytes (white blood cells) are attracted to the areas of cell injury, and the incoming leukocytes initiate a local inflammatory reaction. Some of the attracted leukocytes are macrophages. Macrophages are clean-up cells, and they begin to engulf the local lipids. When macrophages are overwhelmed by the lipids in their vicinity, they become bloated with fatty debris. The accumulation of fat-filled macrophages, which are called foam cells, is a characteristic of atherosclerotic plaque.

In a person with a healthy balance of blood fats such as low blood levels of LDL cholesterol and high blood levels of HDL cholesterol, there is only a modest accumulation of lipids in arterial walls. The available macrophages can swallow and cart off sufficient lipids from the fatty streaks to avoid a lipid buildup, and few foam cells accumulate. When this and the other lipid-removal mechanisms are working smoothly, the amount of sequestered lipid can be controlled and atherosclerosis is minimal. Unfortunately the American diet is high in fat and generally overwhelms the macrophages’ ability to clean up damaged arteries.

A total lipid profile for Mr. Hansen revealed total cholesterol >200 mg/dL and low HDLs <25 mg/dL. Atherosclerotic plaques had built up over time and left only a 1% space for blood flow at the junction of the LAD.

Atherosclerotic plaques are filled mainly with:

In atherosclerosis, the body’s lipid removal systems are working poorly. Foam cells die before they can remove lipids, and a core of necrotic cells forms inside the expanding yellow streak. The body attempts to repair the damage through collage, which enter the mass and begins to create a meshwork with other extracellular matrix materials. By this point, the yellow streak has become an atherosclerotic plaque. 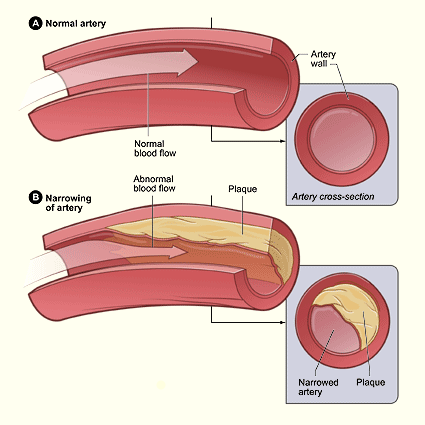 Gradually, atherosclerotic plaques thicken. Internally, the plaques are disorganized and weak. As part of the local repair efforts, a network of small blood vessels grows into the enlarging plaque. The new vessels tend to be leaky due to the inflammatory process, which dilates blood vessels to more easily allow passage of white blood cells, macrophages, and signaling chemicals. The result is that hematomas and clots form inside the plaque. Some regions in the plaque end up with little oxygen and few nutrients. In these poorly oxygenated areas, the local cells—mainly leukocytes and smooth muscle cells—die and create additional necrotic pockets. As in many tissues with chronic inflammation, calcium salts are slowly deposited, making parts of the plaque brittle, causing arteriosclerosis, or hardening of the arteries.

Along with hematomas, these necrotic pockets make the entire plaque susceptible to erosion, crumbling, and rupture. Tears in the fibrous coat of a plaque allow the extracellular matrix inside to come in contact with blood. This stimulates blood-clotting mechanisms and clots form along the edges of the eroded plaque.

Many people go through their entire lives unaware that they have atherosclerosis; however, even asymptomatic atherosclerosis is a constant threat because plaques continue to enlarge. One consequence of this continued growth is that the pressure of an enlarging plaque weakens the muscular layer of the arterial wall and makes the region susceptible to ballooning into an aneurysm (rupture of the wall).

Another consequence is that atherosclerotic plaques become less stable. At some point, the pressure of local blood flow can push the clots and plaque debris downstream to become artery-clogging emboli. The obstructed arteries leave their surrounding tissues ischemic, and the ischemic tissue eventually dies (Libby, 2008).

As they age and thicken, some atherosclerotic plaques accumulate deposits of:

Atherosclerosis of the Coronary Arteries 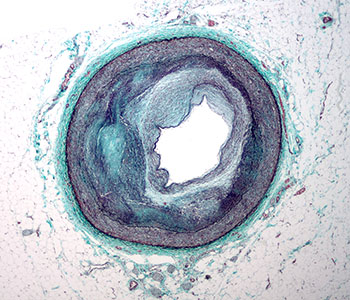 Atherosclerotic plaque forms as a mass inside the arterial wall. Initially, this mass causes a bulge on the outside of a coronary artery, increasing the artery’s overall diameter. Later, as the disease progresses, the plaque begins to bulge into the lumen (inner passageway) of the artery, and at this stage, the plaque reduces the effective inner diameter of the artery and the stenosis can be detected by angiography.

Coronary arteries that have lost 50% to 75% of their inner diameter can no longer deliver sufficient blood flow to meet the increased needs of heart muscle during exercise. That level of stenosis will lead to ischemic symptoms, typically angina, when the patient exercises. If atherosclerotic plaque thickens sufficiently to fill 80% to 90% of the diameter of a coronary artery, ischemic heart symptoms appear even when the person is resting (Antman et al., 2008).

Over time, the section of blood vessel that lies beyond a narrowed segment will dilate, any small collateral arteries will widen, and new collaterals will grow in efforts to deliver life-giving oxygen. In these ways, the arteries of the heart can partly compensate for a narrowed coronary artery when the stenosis has developed gradually.

As brilliant as the body is in adapting for survival, there is no natural protection against sudden arterial narrowing, such as the obstruction produced by clots or debris from a ruptured plaque. Sudden narrowing can lead to ischemia and heart muscle death. This is the most common cause of the death of heart muscle: greater than 95% of all MIs are caused by blood clots and debris from atherosclerotic plaque.

Atherosclerotic plaques are likely to accumulate:

The arteries that supply blood to the heart can partly compensate for a narrowed artery when the stenosis:

Effects of Atherosclerosis on the Heart

Normally, when heart muscle works harder, the blood vessels inside the heart—those arteries downstream from the main coronary arteries—dilate to increase blood flow to the muscle cells. However, if atherosclerosis has narrowed the coronary arteries, dilation of the downstream arteries is not enough to prevent ischemia (Antman et al., 2008).

Myocardial Infarct in the Wall of the Left Ventricle 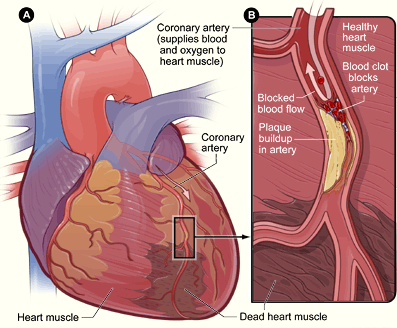 (A) Blood flowing down the left anterior descending (LAD) branch of the left coronary artery has been obstructed. Heart muscle beyond the blockage has died from prolonged ischemia (brown patch). (B) A cutaway diagram of the LAD shows plaque (yellow) that had gradually narrowed the arterial lumen. Later, a blood clot, broken loose from upstream plaque, has become wedged into the narrowed section of the LAD, completely obstructing blood flow Source: NIH, 2016.

In stable angina, coronary arteries are partly occluded. At rest, dilation of the downstream arteries allows sufficient blood flow to meet the demands of the heart muscle cells. However, during exercise, the increased oxygen and nutrients needed by the heart exceed the capacity of the already-dilated arteries. Therefore, when the person exercises, the heart muscles become ischemic, and typically the person feels angina. In most cases, the ischemia of stable angina does not cause significant muscle cell death.

Symptoms in stable angina occur when the demands on the heart exceed the blood flow through pre-existing stenosis. These symptoms occur predictably, whenever the patient’s heart accelerates to a certain level of activity. In stable angina, the event that initiates symptoms is generally external such as exercise, stress, or cold weather. Internally stressors such as psychological stress can also create hypertension and resultant demands on ischemic heart vessels.

When arterial obstruction persists, causing sufficient ischemia to kill muscle cells, this is called a myocardial infarction (MI, or heart attack). After an MI, intracellular proteins leak from the damaged cells and circulate in the bloodstream. An MI can be diagnosed by finding cardiac-specific intracellular proteins (cardiac biomarkers) in the blood of a person who has the signs and symptoms of an acute coronary syndrome.

Myocardial infarctions can be definitively diagnosed in symptomatic patients from blood tests. When heart muscle cells die, heart-specific intracellular molecules (cardiac biomarkers such as troponin) leak into the bloodstream.

The abrupt release of atherosclerotic thrombi that causes myocardial ischemia can also trigger fatal ventricular arrhythmias. This appears to be the critical event behind most cases of sudden cardiac death, a condition in which patients die unexpectedly and within minutes of the onset of symptoms (Schoen & Mitchell, 2009). This fatal symptom is the end stage of CAD and can only be altered with cardiopulmonary resuscitation.

Mr. Hansen had developed stable angina over years of sedentary lifestyle, high-fat diet, and work stress. Unstable angina had developed quickly as new stress worsened at work and a new baby was born to the busy family. Even happy events such as marriage or a baby can result in stress on the body.

The chest discomfort of stable angina is often described as: