Synthetic cannabis (spice, K2) is a widely available, cheap, and increasingly popular type of designer drug. The synthetic cannabinoids have many features that mimic cannabis, but because key chemical components have been altered to avoid legal restrictions and increase potency they can cause seizures, vomiting, tachycardia, chest pain, and serotonin syndrome. Very little is known about management of acute intoxication or abuse of these drugs. 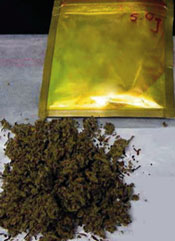 K2 is typically sold in small, silvery plastic bags of dried leaves and marketed as incense that can be smoked. It is said to resemble potpourri. Source: Drug Enforcement Administration.

Synthetic cannabinoids are chemicals synthesized in laboratories to mimic the biologic effects of THC (delta-9-tetrahydrocannabinol), the main psychoactive ingredient in marijuana. A small number of these chemicals were initially developed in the 1980s for research purposes, primarily to investigate the biologic mechanisms of the cannabinoid system and to develop novel therapies for various clinical conditions. Additional synthetic cannabinoids were synthesized for research purposes in the mid-1990s to study drug-receptor interactions in the cannabinoid system (ODC, 2014).

Synthetic cannabinoids typically originate from foreign sources, including China and other countries in Southeast Asia. Bulk substances are smuggled into the United States and find their way to clandestine designer drug product manufacturing operations located in residential neighborhoods, garages, warehouses, and other similar destinations throughout the United States. The powder form of synthetic cannabinoids is typically dissolved in solvents (eg, acetone) before being applied to a green plant material or dissolved in a propellant intended for use in e-cigarette devices (ODC, 2014).

Synthetic cannabinoids sometimes have a fragrance, which can include vanilla, potpourri, spice, blueberry, caramel, and strawberry.

The pharmacologically inactive vegetable matter onto which the synthetic cannabinoids are sprayed accounts for most of the bulk of “spice” by weight. These substances are supposedly derived from plants and are smoked by users. The ingredients listed on the package are generally incomplete or false. One gram of “spice” can contain varying amounts of synthetic cannabinoid, with high variability from one package to another. Consumers do not know what active substance they are using, or in what dose. Other ingredients often added to the vegetable matter are the β2-mimetic substance clenbuterol,* which may be responsible for the sympathomimetic manifestations of “spice” intoxication (tachycardia, hypokalemia), and large amounts of tocopherol (vitamin E), possibly added in order to prevent detection (Hohmann et al., 2014).

*Clenbuterol: a powerful bronchodilator used by sufferers of breathing disorders as a decongestant. It also has fat-burning properties and is widely used by athletes to quickly drop body fat.

*Agonist: a chemical that binds to a receptor and activates the receptor to produce a biological response.

Synthetic cannabinoids include a diverse group of molecules with a nomenclature that can be confusing. Hundreds of compounds are in the JWH series (a series of analogues created in 1994 by Dr. John W. Huffman for studies of the cannabinoid receptors), although many have not yet been identified as drugs of abuse. Additionally, there are 43 JWH compounds of known toxicologic importance, along with 32 associated metabolites. Even within the JWH series there are different classifications including naphthoylindoles (eg, JWH-018), naphthylmethylindoles (eg, JWH-175), and phenylacetylindoles (eg, JWH-201). There are several other series of synthetic cannabinoids, including the AM, UR, RCS, and XLR series; some of these are closely related to compounds in the JWH series (Krasowski & Ekins, 2014).

Though marketed as “natural” herbal blends, these products are usually adulterated with various synthetic cannabinoids, most of which are aminoalkylindoles* of the JWH family. They, along with other synthetic cannabinoids, such as CP-47,497, and HU-210, were first found in the “natural” herbal blends in 2008. One particular aminoalkylindoles, JWH-018, is prevalent across many different brands and batches of K2 products (Brents et al., 2011).

*Aminoalkylindoles (AAIs): a family of cannabinergic compounds that act as a cannabinoid receptor agonist. They were invented by pharmaceutical company Sterling-Winthrop in the early 1990s as potential nonsteroidal anti-inflammatory agents.

When these substances first appeared in Europe, they were accompanied by the claim that the drug’s psychotropic effect was induced purely by natural botanical components. The real active substance was discovered in 2009 with the detection of undeclared synthetic cannabinoid receptor agonists by Volker Auwärter and colleagues at the University of Freiburg in Germany (Hohmann et al., 2014).

Cannabinoid receptor agonists are classified according to their chemical structure, as follows: 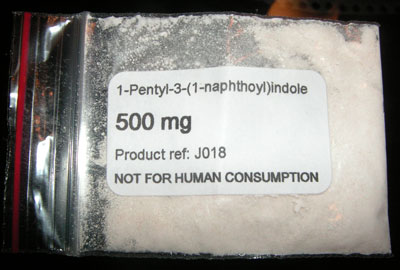 Half a gram of JWH-018. Source: Wikimedia Commons, public domain.

The term Spice is now generally applied to all products containing synthetic cannabinoids, regardless of branding. Compared to THC, synthetic cannabinoids are often more potent, are efficacious CB1 agonists, and may have a longer half-life, all of which may lead to greater cannabinomimetic* toxicity. There is substantial variability in product composition and wide concentration ranges for synthetic cannabinoid, which can also add to the risk of toxicity (Weaver et al., 2015).

*Cannabinomimetic: any substance that is a cannabinoid receptor type 1 (CB1 receptor) agonist as demonstrated by binding studies and functional assays.

Synthetic cannabinoids were first developed to study the structure of the drugs and brain receptor activity. The aminoalkylindoles of the JWH family are named after Clemson University researcher John W. Huffman. JWH-018 and JWH-073 are two of the most common synthetic cannabinoids found in K2 products.
Source: Adams and Logan, Pharmacodynamics and Pharmacokinetics of Synthetic Cannabinoids.

Synthetic cannabinoids are primarily smoked via a joint, bowl, or water pipe, although they can be consumed orally or intranasally. Acute effects are similar to cannabis, including alteration in mood, conjunctival injection,* and tachycardia. Effects are reported to start within 10 minutes after inhalation, and most effects appear to dissipate 2 to 6 hours after use (Weaver et al., 2015). Acute effects, however, can be associated with clinical symptoms atypical of marijuana use, including hypertension, agitation, hallucinations, psychosis, seizures, and panic attacks. In general, the severity of adverse effects associated with synthetic cannabis use is much greater than that of marijuana (Brents et al., 2011).

*Conjunctival injection: red eye, caused by dilation of the conjunctival vessels that overlie the sclera.

Chronic abuse of synthetic cannabis may result in a severe withdrawal and dependence syndrome. The use of synthetic cannabinoids has even been causally linked to at least one death by overdose and has been implicated for likely involvement in several other fatalities, resulting in over 2,500 calls to poison control centers in 2010 alone and numerous visits to emergency departments across the United States and Europe (Brents et al., 2011).

Physiologic side effects include dry mouth, lightheadedness, and headache. Other unwanted negative physiologic effects include diaphoresis, tremors, dystonia, and dyspnea. Tachycardia is common with synthetic cannabinoid use (similar in cannabis users), due potentially to reduced peripheral vascular resistance and the subsequent need to maintain cardiac output by increasing heart rate, rather than due to a direct sympathetic effect. The tachycardia may be severe, along with hypertension and chest pain. One case report of significant bradycardia with chest pain has also been reported (Weaver et al., 2015).

Several synthetic cannabinoid compounds (specifically JWH-018, JWH-073, and AM-2201) have been implicated as a cause of cannabinoid hyperemesis syndrome, which is a chronic disorder that was originally characterized among chronic cannabis users who experienced cyclic episodes of vomiting and abdominal pain relieved by bathing or showering with hot water. However, cannabis-related hyperemesis syndrome is rare. To the extent that synthetic cannabinoid might be more likely to cause nausea and vomiting, such symptoms could help to differentiate intoxication between the two (Weaver et al., 2015).

There are no studies of the long-term effects of synthetic cannabinoids. Smoking synthetic cannabinoids typically involves inhalation of burned, unidentified plant material along with the synthetic cannabinoid, which may have adverse effects on the pulmonary system, so some sources recommend vaporization instead of smoking as a delivery method. Additionally, JWH-018 may be a carcinogen. Anecdotal data indicate the development of tolerance and a withdrawal syndrome with chronic use (Weaver et al., 2015).

These observations have garnered the attention of public health and legislative officials, and even moved the U.S. Drug Enforcement Administration (DEA) to use its emergency powers to categorize JWH-018 and four other synthetic cannabinoids as Schedule I substances for at least one year because “. . . they impose imminent hazard to public safety” (Brents et al., 2011). These compounds became permanent Schedule I substances on July 9, 2012, via passage of the Synthetic Drug Abuse Prevention Act of 2012 (DEA, 2013).