The figure below shows peak seasonal flu activity for the United States by month for the 1982–1983 through 2019-2020 flu seasons. The “peak month of flu activity” is the month with the highest percentage of respiratory specimens testing positive for influenza virus infection during that influenza season. During this 38-year period, flu activity most often peaked in February (17 seasons), followed by December (7 seasons), March (6 seasons), and January (6 seasons) (CDC, 2021, September 28). 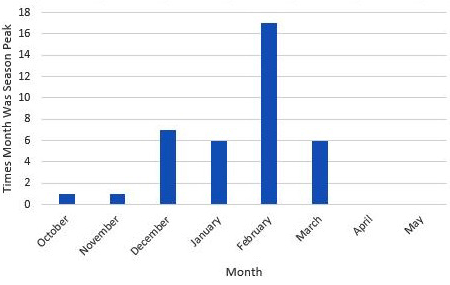 Influenza is a contagious respiratory illness caused by influenza viruses. It can cause mild to severe illness resulting in hospitalization or even death. “Classic” influenza is characterized by the abrupt onset of fever, myalgia, sore throat, nonproductive cough, and headache. The fever is usually 101°F to 102°F and accompanied by prostration (bedridden).

The onset of fever is often so abrupt that the exact hour is recalled by the patient. Myalgias mainly affect the back muscles. Cough is believed to be a result of tracheal epithelial destruction. Additional symptoms may include runny nose, headache, substernal chest burning, and ocular symptoms such as eye pain and sensitivity to light.

The incubation period for influenza is usually 2 days but can vary from 1 to 4 days. The severity of illness depends on whether the immune system has been exposed to related virus variants. Somewhat surprisingly, only about 50% of infected people will develop the classic clinical symptoms of influenza.

Systemic symptoms and fever usually last from 2 to 3 days, rarely more than 5 days. They may be decreased by such medications as aspirin* or acetaminophen. Recovery is usually rapid, but some patients may have lingering depression and lack of strength or energy for several weeks.

Other complications may include primary pneumonia, encephalitis, aseptic meningitis, transverse myelitis, myocarditis, pericarditis, Guillain-Barré syndrome, and Reye Syndrome. Reye syndrome is a complication that occurs almost exclusively in children taking aspirin, primarily in association with influenza B virus (or varicella zoster virus), and presents with severe vomiting and confusion, which may progress to coma due to swelling of the brain.

Most deaths due to influenza typically occur among people 65 years and older.

Influenza is primarily a community-based infection that is transmitted in households and community settings. In humans, influenza is primarily transmitted from person to person via large virus-laden droplets that are generated when infected individuals cough or sneeze. These large droplets can then settle on the mucosal surfaces of the upper respiratory tracts of susceptible people who are nearby (within 6 feet). 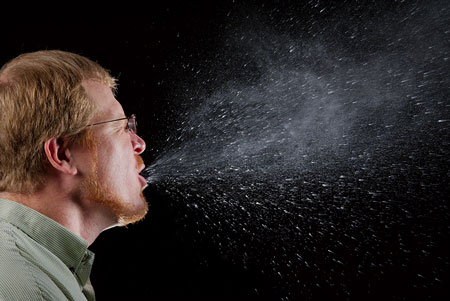