Although HIV infection affects people from all ethnic groups, genders, ages, and income levels, some groups are at greater risk. This includes men who have sex with men, injecting drug users, people with hemophilia, infants and children, and women.

Men Who Have Sex with Men

Gay, bisexual, and other men who have sex with men (MSM) are the population most affected by HIV in the United States. Stigma, homophobia, and discrimination put MSM of all races/ethnicities at risk for multiple physical and mental health problems and can affect whether they seek and receive high-quality healthcare, including HIV testing, treatment, and other prevention services (CDC, 2020, May 7).

In 2018, adult and adolescent MSM accounted for 69% of the nearly 38,000 new HIV diagnoses in the U.S. and 6 dependent areas. Many Black/African American and Hispanic/Latino MSM with HIV, particularly young MSM, are unaware of their HIV infection. Lack of awareness of HIV status among young MSM may be due to recent infection, not getting tested due to underestimation of personal risk, or fewer opportunities to get tested. Persons who do not know they have HIV do not get medical care or receive treatment and can unknowingly infect others (CDC, 2020, May 7).

Diagnoses of HIV Infection among Men Who Have Sex with Men, by Age at Diagnosis, 2014–2018—United States and 6 Dependent Areas

Harm reduction is about showing love, compassion, and dignity to people who use drugs, without judgement, and providing them with safer ways to use substances as well as ways to get resources in the community.

From 2014 through 2018 in the U.S. and 6 dependent areas, the percentage of diagnoses of HIV infection attributed to injection drug use increased. In 2018, among 1,434 male adult and adolescent persons who inject drugs with diagnosed HIV infection, approximately:

Among more than 1,000 adults females and adolescents who inject drugs with diagnosed HIV infection:

People who continue to inject recreational drugs are candidates for harm-reduction measures such as needle exchange programs, which have been proven to reduce the transmission of bloodborne pathogens like HIV, HBV, and HCV.

Diagnoses of HIV Infection among Persons Who Inject Drugs, by Region and Race/Ethnicity, 2018—United States and 6 Dependent Areas 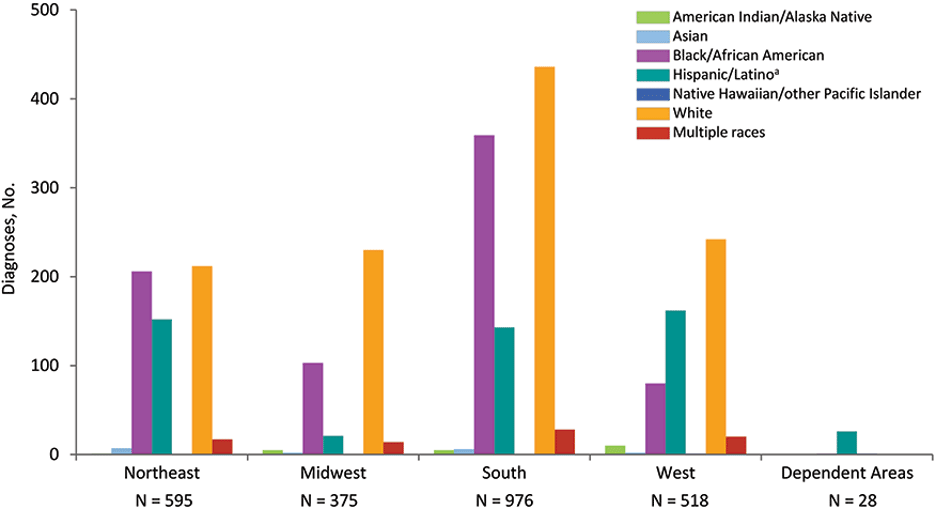 Before the 1970s, life expectancy for persons with severe hemophilia was in the teens or early 20s. In the mid-1960s, factor VIII concentrates derived from plasma were developed, resulting in both extended life expectancies and vast improvements in quality of life (Schieve et al., 2020).

The gains in life expectancy for hemophilia patients were short lived. Factor concentrates, prepared from large pools of human plasma were contaminated with bloodborne pathogens, most notably HIV and HCV. An estimated 60%–70% of persons with severe hemophilia were infected with HIV from contaminated blood by the early 1980s while HCV infected nearly all persons with severe hemophilia. By 2002, HIV infection and AIDS resulted in the deaths of nearly 40% of the estimated 10,000 persons with hemophilia living in the U.S. in 1977 (Schieve et al., 2020).

The incidence of HIV and HCV infection among persons with hemophilia decreased during the 1990s because of safer blood products and the development of recombinant, non–blood-based factor VIII and factor IX products. Surveillance systems were established to track the safety of hemophilia treatments and to better understand the healthcare needs of persons with hemophilia (Schieve et al., 2020).

Today, donated blood is screened extensively to prevent HIV-infected blood from entering the blood supply; the risk of acquiring HIV from a blood transfusion is extremely rare. Additionally, the FDA has imposed strict guidelines on the donation of blood from high-risk groups.

Certain strains of HIV may infect women more easily. Women who are “receptive” partners are more easily infected with HIV than “insertive” partners because intercourse causes micro abrasions in the vaginal wall, allowing blood transmission to the female. In general, receptive partners are at greater risk for transmission of any sexually transmitted disease, including HIV (CDC, 2021, September 22).

Though HIV diagnoses among women have declined in recent years, more than 7,000 women were diagnosed with HIV in the U.S. and 6 dependent areas in 2018. About 11% are unaware of their positive status (CDC, 2020, May 7).

HIV-Positive Women are at Increased Risk for Complications

Women infected with HIV are at increased risk for gynecologic problems, such as pelvic inflammatory disease, abscesses of the fallopian tubes and ovaries, and recurrent yeast infections. They may have an increased risk of infection with the human papilloma virus (HPV).

Certain strains of HPV can cause cervical dysplasia, a precancerous condition of the cervix. Cervical dysplasia in HIV-infected women often becomes more aggressive as the woman's immune system declines. This may lead to invasive cervical carcinoma, which is an AIDS-indicator condition.

Women who are infected with HIV, or who have family members who have HIV, often provide care for children or other family members, and may postpone medical appointments or even postpone taking medications. Some may lack of transportation or health insurance. Low income and low health literacy complicate care.

Several studies have shown that women in the U.S. who have HIV receive fewer healthcare services and HIV medications than men. This may be because women aren't diagnosed or tested as frequently (HIV.gov, 2021, June 3).

Violence against women increases the risk of contracting HIV. This can occur through forced sex, sexual abuse in childhood, and human trafficking and sex trafficking (OWH, 2018). Empowering adolescent girls and young women can not only reduce their HIV risk but also confer a broad array of lifelong health and social benefits. Education reduces HIV vulnerability while helping build strong, resilient societies, underscoring the importance of investments in education systems generally—and specifically in measures to help keep girls in school (UNAIDS, 2021, December 1).

Risk of Perinatal Transmission for Women with HIV

It is vital that women know their HIV status before and during pregnancy; antiretroviral treatment significantly reduces the chance that their child will become infected. Advances in research, prevention, and treatment have made it possible for many women with HIV to give birth to babies who are free of HIV. Because of these advances, the annual number of HIV infections through perinatal transmission in the U.S. and dependent areas has declined by more than 95% since the early 1990s (CDC, 2021, September 22).

HIV can be passed from mother-to-child anytime during pregnancy, childbirth, and breastfeeding. This is called perinatal transmission.

Early diagnosis of HIV infection in newborns is possible with rapid tests. Antiretroviral therapy for infants is now the standard of care and should be started as soon as the child is identified to be HIV-infected. Uninfected children born to HIV-positive mothers are currently treated with antiretroviral medicines for 6 weeks to reduce any possibility of HIV transmission.

Children show significant differences in their HIV disease progression and their virologic and immunologic responses when compared to adults. Without drug treatment, children may have developmental delay, P. carinii pneumonia, failure to thrive, recurrent bacterial infections, and other conditions related to HIV.

Before the development of antiretroviral therapies, most HIV-infected children were very sick by 7 years of age. In 1994, scientists discovered that a short treatment course of the medication AZT for pregnant women dramatically reduced the number, and rate, of children who became infected perinatally.

There are reasons why viral suppression is lower among Black populations. First, minority patients are less likely to have healthcare providers of the same racial and ethnic identity. Similar racial identity is associated with better patient-provider relationships while lower cultural competence among providers is associated with worse HIV care outcomes. Second, lower health literacy among Black persons with HIV may also negatively impact adherence to antiretroviral therapy. Structural racism, discrimination, and mistrust in the health system also create barriers to HIV services among Black persons. These mechanisms also apply to other racial and ethnic minority groups (Martin et al., 2021).

The disproportionate impact of HIV on Black/African American and Hispanic/Latino communities is evident in incidence (new HIV infections). Source: HIV.gov.

Third, many infections among heterosexually active women may be associated with male sex partners who are connected to men who have sex with men. Other reasons include lack of awareness of their male sexual partners’ HIV status and risk factors and higher engagement in risky behaviors among women who have been sexually abused, with women experiencing higher rates of intimate partner violence than men (Martin et al., 2021).

The legacy of historic racism and trauma to Black women from the era of slavery to modern times have contributed to worse sexual health outcomes. This includes coerced medical experimentation, race-based events such as rape and lynching, and inadequate healthcare, among others. This historical context highlights the importance of culturally responsive interventions to improve involvement and retention in HIV prevention programs and high-quality HIV care for Black women (Martin et al., 2021).

Higher HIV diagnoses among Black heterosexually active women is consistent with research highlighting disparities in sexual health outcomes among Black women. This includes higher rates of maternal morbidity and mortality, congenital syphilis among their newborns, higher rates of unplanned pregnancy among women with HIV, and lower rates of pre-exposure prophylaxis use than either men or White women. More generally, Black populations (including men) experience disparities across health conditions including COVID-19, diabetes, cancer, and other health outcomes (Martin et al., 2021).