2. Factors Contributing to the Opioid Epidemic

Over the last two decades, several factors have contributed to the opioid crisis. In 1966 pain was added as the fifth vital sign, leading to practices that sought to minimize or eliminate pain. Campaigns by pharmaceutical companies advertised the effectiveness of their drugs for the treatment of acute and chronic pain. Clinical practice guidelines began to be influenced by pharmaceutical companies, and financial and conflict-of-interest disclosures were avoided by some researchers and clinicians (Spithoff et al., 2020).

The introduction of pain as the fifth vital sign by the American Pain Society in 1995, the Veteran’s Health Administration in 1999, and the Joint Commission in 2001, overemphasized pain as a quantifiable measure. The intent was to ensure that pain is measured and treated (Bernard et al., 2018).

Perceptions of undertreatment led to increased use of opioids, at first for cancer-related pain and later for noncancer pain. The increased use was related to exaggerated claims in the medical literature (and by the pharmaceutical industry), of a lack of addiction—a claim that was subsequently found to be false and even deliberatively deceptive. The epidemic of opioid prescribing that began in the 1990s resulted in an alarming rise in opioid deaths (Bernard et al., 2018).

As prescription opioids became more acceptable as a first-line treatment for noncancer pain, evidence began to slowly emerge about the harm associated with this practice. Despite this increasing awareness, prescriptions for opioids gradually increased, and then exploded. The influence of the pharmaceutical industry in pushing the use of prescription opioids for pain management was a significant factor and has been described as “pervasive” by some researchers (Spithoff et al., 2020).

*Academic detailing: Peer-to-peer educational outreach that has its roots in pharmaceutical detailing and was designed to improve prescribing practices by physicians.

There is evidence that the pharmaceutical industry influenced physicians’ clinical practice guidelines. Organizations that produced the guidelines failed to employ, regularly, mechanisms such as appointing a methodologist in a lead role or conducting an external review, that would mitigate potential bias from industry involvement (Spithoff et al., 2020).

Some of this acceleration in the rate of increase in opioid prescribing may have been due to the FDA’s allowing labelling on OxyContin that read that iatrogenic* addiction was “very rare” and that the delayed absorption of OxyContin reduced the abuse liability of the drug (Baker, 2017).

*Iatrogenic: a harmful complication caused by a doctor or healthcare provider.

These claims were used in marketing campaigns to physicians and in more than forty national pain-management and speaker-training conferences for which all expenses were paid. The FDA required removal of these unsubstantiated claims from OxyContin’s labeling in 2001. However, the concept that iatrogenic addiction was rare and that long-acting opioids are less addictive was greatly reinforced and widely repeated, and studies refuting these claims were not published until several years later (Baker, 2017). 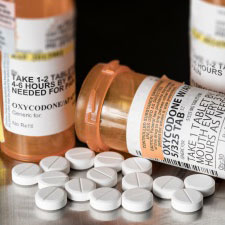 Although accurate clinician disclosure was the accepted standard during that time, some researchers involved with the development of guidelines either did not report—or did not accurately report—funding sources for the sponsoring organization and conflicts-of-interest for individuals. One top cancer researcher failed to disclose millions in payments. Reasons for not declaring conflicts of interest have been poorly studied but may include not understanding what to declare; believing that a conflict is irrelevant; and concern about reducing trust in the guideline user (Spithoff et al., 2020).

2020 saw the largest ever settlement by a pharmaceutical company for its role in fueling the opioid crisis. Purdue Pharma pleaded guilty on November 24, 2020 to felony charges that included paying illegal kickbacks to physicians who prescribed unnecessary or excessive doses of the drug. As part of the settlement, Purdue Pharma agreed to pay $8 billion to the United States and to dissolve their business and form a public benefit corporation, which will continue manufacturing drugs but steer profits from future opioid sales toward programs aimed at alleviating the addiction crisis (Desmon, 2020).