Balance, Postural Control, and Falls in Older AdultsPage 4 of 11

2. Incidence and Cost of Falls

In 2004, according to NDNQI data, nursing units reported 113,067 patient falls. The observed fall rate across all nursing units was 3.32 per 1,000 patient days. Falls were most common in rehabilitation units and least common in intensive care units. Most patients (72%) had no injury from their falls; most of the others (23%) suffered a minor injury from the fall. Five percent had a moderate or major fall-related injury (Lake et al., 2010).

Similar results were found in a 2012 study of adults 85 years and older in northeast England—the Newcastle 85+ Study. Researchers found that 38% of the study participants had at least one fall in the previous 12 months, and 11% of those who fell sustained a fracture in the 12-month period, which equates to 4% of 85-year-olds overall. Previous studies in this age group report prevalence rates for falls over a 12-month period of 43% to 44%, and fracture rates of 7% to 9% per fall (Collerton, 2012).

Despite the relatively small number of serious fall-related injuries, falls have major social and medical consequences for older adults. In the United States in 2008 nearly 20,000 older adults died as a result of injuries from unintentional falls. Globally, the World Health Organization (WHO) estimates that just under 500,000 people die each year as a result of a fall, and nearly 40 million people experience falls that are severe enough to require medical attention (Zhang, 2012).

In 2010 the rate of nonfatal fall injury episodes for which a healthcare professional was contacted was highest in persons aged 75 years and older (CDC, 2012b). Among older adults, lacerations, hip fractures, or head traumas occur in about a quarter of people who fall, and falls are the most common cause of hospital admissions for trauma.

In adults over the age of 65, falls are the cause of more than 95% of hip fractures. Injuries such as these can cause severe health problems and lead to reduced quality of life and even premature death. Within a year after sustaining a hip fracture, an elderly nursing home resident has a 40% risk of death and a 6% to 12% risk of another hip fracture (Sawka, 2010). 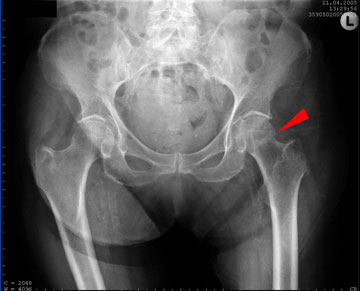 On average, older adults with hip fractures are hospitalized for about one week. About one-quarter of adults who lived independently before their hip fracture will stay in a nursing home for at least a year after their injury (CDC, 2010).

In both men and women, hip fracture rates increase exponentially with age. People 85 and older are 10 to 15 times more likely to sustain hip fractures than are those age 60 to 65. Osteoporosis increases a person’s risk of sustaining a hip fracture. The National Osteoporosis Foundation estimates that more than 10 million people over age 50 in the United States have osteoporosis and another 34 million are at risk for the disease (CDC, 2010).

In 2010 about 1.6 million people 65 and older lived in nursing homes, representing about 5% of adults 65 and older. Despite this relatively small number, residents of nursing homes account for about 20% of deaths from falls in this age group (CDC, 2012c).

Each year a typical nursing home with 100 beds reports 100 to 200 falls, although the number is probably much higher because many falls go unreported. As many as 3 out of 4 people in nursing homes fall each year, which is twice the rate of falls for older adults living in the community. Nursing home residents often fall more than once—an average of 2.6 falls per person per year. About a third of fall injuries occur among residents who cannot walk (CDC, 2012c).

Effects of Stroke on Fall Rate

Balance difficulties and falls are two of the serious medical complications that are associated with a stroke. Most people who have had a stroke (75%) fall during the first 6 months post stroke compared with the 30% annual fall rate in the general older adult population (Schmid et al., 2010).

Studies that focus on post stroke safety and complications have identified an increased fall risk during acute hospitalization. Falls and other medical complications are associated with triple the length of the acute hospital stay (Schmid et al., 2010). The highest rates of falls occur upon discharge from the hospital (Simpson, 2011).

Falls are an important issue during the acute stay, and fall prevention should be addressed immediately upon admission. Stroke severity, specifically a National Institutes of Health Stroke Scale (NIHSS) score ≥8, can be used to identify stroke patients who are at greatest risk of falling. Those determined to be at risk for falls should have a fall prevention program initiated while they are still in the acute inpatient hospitalization period (Schmid et al., 2010).

In a recent Canadian study, a lower score on the Berg Balance Scale (see later section on Assessing Functional Mobility and Gait) was associated with greater falls for both stroke and control groups. Researchers found that people recently discharged from rehabilitation to home were at greater risk for falls in their home. This may be because, following a stroke, people spend more time at home or are more cautious when outside their home. This finding reinforces the importance of a home assessment, home safety education, and environmental modifications as part of discharge planning (Simpson, 2011).

In a structured interview of 816 men and women in northeast England (the Newcastle 85+ Study), researchers found that falls had significant psychosocial consequences. Those who sustained a fall “worried about falling” (42.0%), expressed “loss of confidence” (40.0%), and reported “going out less often” (25.9%). “Fear of falling” was reported by 42% of the study participants. Psychosocial consequences of falls were significantly more common in women, which suggests the need for gender-specific interventions in older adults (Collerton, 2012).

Experiencing a fall often increases an older adult’s fear of falling, which of itself is correlated with future falls. Fear of falling leads older adults with and without a history of falling to limit activities, which eventually increases fall risk through functional decline, deterioration in perceived health status, and increased risk for admission to institutional care (Michael, 2010).

A review of 33 studies that looked at fear of falling in community-dwelling older adults found that fear is widespread among those who have a history of falls as well as those who had not yet experienced a fall. The main risk factor for developing a fear of falling was a previous fall. Fear of falling increases with age and is more prevalent in women than men (Scheffer et al., 2008).

Risk factors associated with a fear of falling included:

Fear of falling may also contribute to changes in gait. Older adults who fear falling tend to walk at a slower pace and have higher levels of anxiety and depression compared with adults who do not fear falling (Shumway-Cook and Woollacott, 2012).

The “long-lie” condition, in which a faller is unable to get up and remains on the ground for several hours, is a consequence of falling that has social and psychological overtones. Even if no injury has occurred, many people who fall are unable to get up off the floor without assistance. Long-lies are associated with social isolation, fear of falling, muscle damage, pneumonia, pressure sores, dehydration, and hypothermia (Bagala et al., 2012).

Certain psychosocial factors, if present, have been shown to have a protective effect against fall risk. In a study of hip-fracture risk involving 387 Australians over the age of 65, the following factors were protective of hip fracture: