3. Communicating with Clients with Alzheimer’s Disease

My mom struggles for words—she tries to explain something by saying “you know—that thing” and then gets frustrated when I don’t understand. When I read the newspaper to her, the articles get jumbled up in her head and she doesn’t know when one article ends and another starts. So I just read short articles, Miss Manners, that sort of thing. I tell her “that’s the end of the article about former President Obama—this is a new article about the weather back east.”

Think about the last conversation you had with a friend or family member. You said what you wanted to say. You understood the conversation and remember what was said. You probably had the conversation while doing something else—fixing breakfast or getting ready for work. You had no trouble understanding the conversation even if there was a lot of noise in the background.

When communicating with a person who has dementia, there are several things to keep in mind. What is the level of the person’s dementia? Is there a hearing loss? What is the setting? Are you having a general, social conversation or do you have a specific goal or task in mind?

A person with dementia has to work harder than you do to say what they want to say. They might not remember what was said a few moments ago and they have trouble talking and doing something else at the same time. Background noise can be confusing and irritating.

A general conversation can be about yourself, about your work day, your hobbies, or your family. It can include positive comments about people you work with or other family members or caregivers. If there is another person nearby you can include that person in the conversation.

You can connect with people by learning about what they liked when they were younger. What music was popular? Who was president? What major events happened in their younger years? Did they serve in the military? Where did they work? Where did they travel? What were their interests and hobbies?

People with dementia—especially moderate or severe dementia—may have difficulty with general conversations. They have difficulty understanding complex questions or statements. For example, instead of stringing together several thoughts or statements it is better to break down your greetings, statements, or questions into short, simple sentences. Listen carefully and use your judgment to determine if the person understood you. Although they may not remember what you talked about yesterday they still want to hear what you have to say, even if you are repeating something said earlier.

Conversations Related to a Task or Goal

Talk slowly and don’t argue. Use gentle persuasion and be positive when giving directions. Share your goals with the resident. Be respectful and relaxed. Keep in mind that the person you are caring for may not share your goal or agree with what you are asking. Or they may not understand what you want. It is very common for caregivers to mistake a response for understanding. At times, we all fake our understanding of a conversation—even those of us without dementia. The following story featuring Randy and Ann illustrates this point. Think about what you would do in this situation.

Randy in the Morning 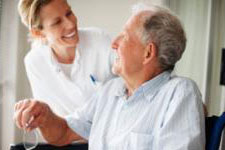 Randy has moderate dementia. He lives at home with 24-hour care. He can still get up and dress himself without help. This morning Randy got dressed and is resting in a chair next to his bed. Ann, a homecare aide, enters his room and calls out to him, “Come on Randy. Are you hungry? Did you sleep well? Time for breakfast! Stand up. Let’s get you to the kitchen.” Randy doesn’t move, so Ann tries again, “Come on, Randy, get up! You don’t want your breakfast to get cold, do you? I don’t think so. Come on Randy, I’m really busy!” Ann takes his arm and helps him stand up. Randy pulls away and sits back in his chair.

What Is Randy Thinking?

Randy is comfortable and a little sleepy. He’s not sure what time of day it is. He isn’t hungry. A young woman he doesn’t know has barged into his room and is saying something to him in a loud voice. He is trying to figure out what she is saying—when she says something else. Her voice is loud and he grimaces a little. He is not sure what she wants. She grabs his arm and he supposes he should go with her but she is being too pushy and this makes him mad. So he pulls away from the young woman and sits back in his chair. He turns his head and tries to ignore her, hoping she will go away.

What Is Ann Thinking?

Ann is really busy. The regular homecare worker called in sick so she was asked to cover at the last minute despite having just completed a shift at the local nursing home. She is tired and wants to get Randy to the kitchen for breakfast. After breakfast she wants Randy to take a shower. When she enters his room she is relieved to see that Randy is already dressed and up in a chair. She tells him it’s time for breakfast, takes his arm, and tries to help him stand up. Randy seems confused and he pulls away. Ann repeats what she had just said, only more loudly. She reaches for him again but he turns away, crosses his arms, and refuses to budge.

What Could Ann Have Done?

Ann should enter Randy’s room quietly and respectfully after knocking on the door to get Randy’s attention. She should ask “May I come in?” and wait for Randy’s reply. Approaching Randy more slowly, squatting next to him, and introducing herself gives Randy a chance to understand who she is. A pause at the end of each sentence gives Randy time to respond. “Hi, Randy.” Pause. “I’m Ann—I’ll be helping you today.” Pause. “How are you?” Pause. “It’s 9 a.m.” Pause. “Time for breakfast.” Pause. If Randy doesn’t respond, Ann can repeat what she just said in a calm voice or ask another short, closed question: “Randy, are you hungry?” Pause. Now Randy only has one simple statement to think about and he is more likely to understand and respond. Ann must remember that Randy doesn’t have to do what she asks. It’s okay for Randy to have his breakfast in his room or even skip breakfast and eat when he is hungry.

Strategies and Guidelines for Verbal Communication

A conversation with a person with dementia begins with eye contact and an introduction. Starting with something light and conversational such as the weather or what’s happening in the news puts people at ease. Nonverbal gestures such as head nods, a light touch on the arm, and a warm expression create trust.

No matter how severe the dementia, practice these habits:

Touch is a powerful form of nonverbal communication. Touch can be friendly, frightening, soothing, dominant, or supportive. Touch has different meanings depending upon your culture, gender, age, and situation.

The way you speak carries nonverbal information. Your tone can reveal calmness or impatience, affection or disapproval, confidence or fear. When you are talking, the loudness of your voice and its tone and rhythm are communicating additional information. If you are hurried, frustrated, or angry, a person will pick up on your mood and body language more quickly than your verbal communication.

How the environment looks is a form of nonverbal communication. A clean, nicely decorated room with good lighting is supportive. It encourages people to interact. A drab room with harsh lighting and little decoration has the opposite effect—it shows a lack of support and respect. Some studies have shown that people say they don’t like other people when they see them in unattractive rooms.

Nonverbal communication using hand gestures and unhurried movement reinforces your words. If the person does not answer right away, be patient and wait a bit. It’s okay to be silent, which is calming and reassuring—especially in social conversations.

Communicating When a Person Is Unresponsive

People in the late stage of dementia may become unresponsive. This means they do not respond to what is happening around them. It does not mean they have no response—only that they can no longer communicate their wishes clearly using speech.

Communicating with a person who is unresponsive can be a challenge for family and caregivers. It’s difficult to know what the person is thinking or feeling. Fortunately, many of the techniques that work in the earlier stages of dementia are useful in this stage as well.

Assume that the person can hear and possibly understand even if they don’t respond. Use gestures and facial expressions to support what you’re trying to say. Give the person time to understand why you are there. Practice a calm, slow, and respectful attitude. You can communicate concern and caring by using pillows for neck, arm, and leg support, a warm blanket, and gentle repositioning. Mild range-of-motion exercises, gentle touching, and massage are reassuring. 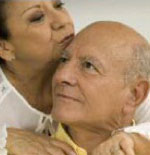 Appropriate touch is a powerful form of communication and reassurance. Source: ADEAR, 2017a.

Touch can be a form of therapy and can include massage, therapeutic touch, reflexology, shiatsu, acupressure, and other hands-on techniques. Therapeutic touch can be used to decrease behavioral symptoms of dementia, specifically restlessness and vocalization (Oliveira et al., 2015).

Touch must always be applied appropriately and ethically, providing support and reassurance with the goal of decreasing pain or discomfort, calming anxiety, or relieving depression. As with other interventions, clients have the right to refuse care, including massage and touch.

Massage and touch are among the interventions used in dementia care with the aim of reducing depression, anxiety, aggression and other related psychological and behavioral manifestations. Expressive touch such as patting or holding a client’s hand involves emotional intent, for example, to calm a patient or to show concern, as opposed to instrumental/task–associated touch within nursing care (O’Neil et al., 2011).

Culture and language can impact a person’s response to touch. A person-centered approach encourages you to learn as much as possible about a client’s beliefs and values before providing treatment. Family members are an important resource if there is something you do not understand. Additional suggestions:

Keep the environment peaceful and avoid loud or sudden noises; the person has no way to tell you when a sound is annoying. Reduce discomfort and confusion by keeping the area around the bed or chair free of clutter.

No matter how unresponsive a resident is, practice these habits: