About Suicide in Washington State, 3 unitsPage 7 of 11

Imminent harm means a person is thought to be at immediate risk of self-harm or suicide. Healthcare providers working in outpatient clinics, home health, social service centers, rehab therapy clinics, and pharmacies must know what to do if a screen indicates that a client is at immediate risk of self-harm. The overreaching goal is not to diagnose, but to be ready to talk, keep the person safe, and have referral information readily available.

Recognizing if someone is at risk of imminent self-harm requires awareness of a client’s current mental status as well as a person’s intent (Williams, 2016). All suicide attempts must be taken seriously, including those that involve little risk of death, and any suicidal thoughts must be carefully considered in relation to the client’s history and current presentation (CSAT, 2015).

In a multi-center study of 1,376 emergency department patients with recent suicide attempts or ideation, an intervention consisting of secondary suicide risk screening by the ED physician, discharge resources, and post-ED telephone calls resulted in a 5% absolute decrease in the proportion of patients subsequently attempting suicide and a 30% decrease in the total number of suicide attempts over a 52-week followup period.

Discussing Lethal Means with Your Client

Lethal means are the instruments or objects used to carry out a self-destructive act. The risk of imminent harm is inextricably linked to the availability of lethal means. If a client is experiencing significant distress, appears to be at immediate risk of self-harm, or has a recent history of suicidal behavior, directly ask if he or she has access to lethal means that may be used in a suicide attempt.

When asking about lethal means, be direct with your questions and ask in a non-judgmental manner. For example: “What do you have access to once you leave this office that you can use to harm yourself?” Or, “While you’re in this dangerous period, can I call your partner or family member and ask them to remove the guns, poisons, and medications from your house?”

Show concern by saying for example, “I want to let you know I appreciate and am honored that you’ve shared your concerns with me. I’m worried that you may go to a place of despair when you leave here and I’m concerned for your safety.” Try to establish trust—if you think the person is at risk, there is no reason to cover your concern or to lie.

When a person in acute crisis, access to lethal means such as firearms, poisons, prescription medications, chemicals, ropes, and knives can increase the likelihood of self-harm. Firearms are of particular concern and are the most common instrument used in suicides and suicide attempts, especially among men and both male and female veterans. Household firearm ownership rates are a significant positive predictor of both homicides and suicides (Swanson et al., 2015). 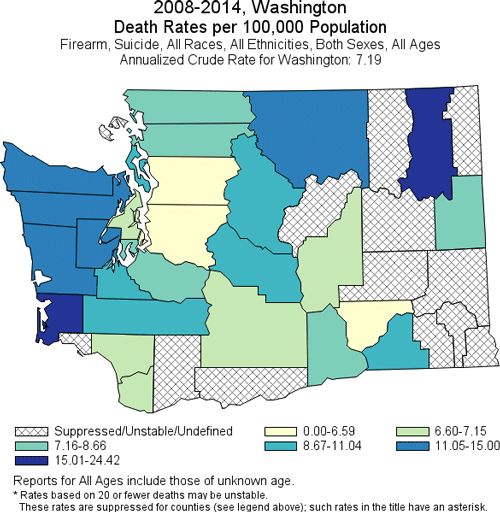 About half of emergency department visits involve anti-anxiety and insomnia medications, about a third involve pain relievers, and about a quarter involve antidepressants. For adult men and women, more than a third of all drug-related emergency department visits involving a suicide attempt also involve alcohol, and 11% involve illicit drugs (Tesfazion, 2014).

Means restriction is the techniques, policies, and procedures designed to reduce access or availability to means and methods of deliberate self-harm. Among suicide prevention interventions, reducing access to highly lethal means of suicide has a strong evidence base and is now considered a key strategy to reducing suicide death rates. Restricting access to firearms is of particular importance, since firearm suicide attempts have a high case-fatality rate and firearms account for 51% of all suicide deaths in the United States (Betz et al., 2016).

Implementation of means restriction is broad and can include:

A suicide attempt often occurs within only minutes of the decision to make an attempt, and approximately 90% of firearm suicide attempts are fatal (compared to as few as 2% of medication overdoses). Safe storage of firearms and other lethal means has been associated with less risk for suicide among adults and youth, and lethal-means counseling in emergency departments can affect storage behavior (Betz et al., 2016). In Washington State, from 2012 to 2016, firearms were used in 48% of all suicides (WSDOH, 2018).

Although strategies to restrict access to lethal means have focused on at-risk individuals, evidence for means restriction has come from situations in which a universal approach was applied to the entire population. For example, the detoxification of domestic gas in the United Kingdom and discontinuation of highly toxic pesticides in Sri Lanka were universal measures associated with 30% and 50% reductions in suicide, respectively (HHS, 2012).

Counseling on Access to Lethal Means (CALM) is an example of a program designed for those who have training and experience in mental health counseling and is also appropriate for other healthcare providers, substance abuse counselors, and community pharmacists. It emphasizes that restricting access to lethal means should be part of a comprehensive prevention strategy. That is because most suicidal people are ambivalent about wanting to die, and many suicide attempts are made impulsively, during a short-term crisis (SAMHSA, 2014).