About Suicide in Washington State, 3 unitsPage 8 of 11

6. Community-Based Pharmacists and Other Healthcare Providers

Pharmacists are educated and trained about medications and their side effects, as well as the effects of polypharmacy. Because pharmacists are located not only in hospitals but also within community-based pharmacies, chain pharmacies, nursing homes, and outpatient hospital pharmacies, they routinely have the opportunity to provide counseling to clients and their families (Yap, 2015).

Pharmacists have two responsibilities related to suicide prevention. At a minimum, they need to be able to talk with clients about suicide and complete a quick screen. The second responsibility is to get the person connected to help—whether to his or her physician, a family member, or the suicide hotline (Yap, 2015).

Pharmacists can educate clients and family members about reducing stocks of medicine to a nonlethal quantity and locking up medicines that are commonly abused (eg, prescription painkillers, benzodiazepines). This approach can be useful in helping to prevent suicide, as well as unintentional overdoses and substance abuse (HHS, 2012).

Given that many of the medications used to treat mental illness can be toxic in an overdose, educating clients about—and reducing access to—potentially toxic medications can be a challenge. Because the majority of suicide attempts are transient and the time between contemplating suicide and the attempt is less than 5 minutes for many attempters (Hassamal et al., 2015), restricting access can mean the difference between life and death. In one sample, 60% of patients reported currently taking at least one medication for an emotional or psychological problem, and medication overdose was the suicide method most commonly reported as having been considered (Betz et al., 2016).

When highly lethal means are less available to impulsive attempters, the odds are better that they will survive a suicide attempt (SAMHSA, 2014). For more information for pharmacists, see the Pharmacists Preventing Suicides website at www.pharmacistspreventingsuicides.com/.

Other community-based healthcare providers may come in contact with at-risk clients either before or after a suicide attempt. In both instances, it is important to understand the reason for screening and referral for suicidal ideation and behaviors. Physical and occupational therapists treat clients with chronic pain, a risk factor for depression and suicidal ideation. Mental health providers and drug abuse counselors provide critical social and psychological support. If a client is at risk of imminent harm, routine screening can provide the support needed to avert self-harm. If a client has been referred following a suicide attempt, screening is particularly important because a client who has attempted suicide remains at high risk following an attempt.

Because of their ongoing and regular contact with their clients, outpatient and community healthcare and mental health providers are in a unique position to provide education about imminent harm and lethal means. However, many may fail to do so, or do so only when a client is identified as being at a very high risk for suicide (HHS, 2012).

Pharmacists and community healthcare and mental health providers play a critical role in encouraging safe storage of potentially lethal products. Safe storage of medications, firearms, and other household products can reduce the risk for suicide by separating vulnerable individuals from easy access to lethal means. Recommended practices include education and counseling around storing firearms (unloaded and separate from ammunition) in a gun safe or lock box and keeping medicines in a locked cabinet or other secure location away from people who may be at risk or who have made prior attempts (Stone et al., 2017).

Public health campaigns such as Safer Homes, Suicide Aware focus on simple steps to prevent suicide deaths and attempts long before a crisis occurs. This type of public health program educates family members, pharmacists and other community healthcare and mental health providers about potential hazards in the home.

For pharmacists and mental health providers, medications are a particular concern because of the potential for abuse, accidental poisonings, and use in suicide attempts. Safer Homes Suicide Aware recommends: 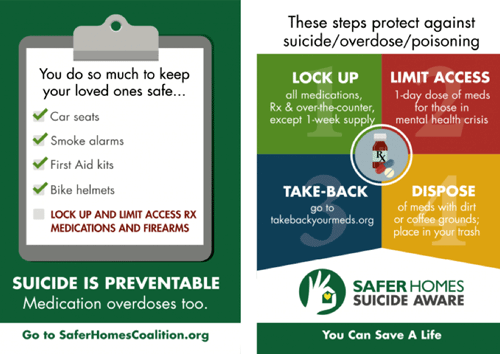 The Emergency Department Counseling on Access to Lethal Means (ED CALM) trained psychiatric emergency clinicians in a large children’s hospital to provide lethal means counseling and safe storage boxes to parents of patients under age 18 receiving care for suicidal behavior. In a pre-post quality improvement project, researchers found that at post-test 76% reported that all medications in the home were locked up as compared to fewer than 10% at the time of the initial emergency department visit. Among parents who indicated the presence of guns in the home at pre-test (67%), all (100%) reported guns were currently locked up at post-test.

Francoise Gets Help from Her Pharmacist

Francoise is a 45-year-old woman who was previously stable on medications (lithium) for bipolar disorder. She stopped filling her prescription for lithium about 3 months ago.

On the day the pharmacist is conducting screening, Francoise arrives at the Rite Aid Pharmacy with prescriptions for opioids and benzodiazepines from a different provider in a nearby town. She appears nervous and agitated with evidence of thought disorder. She also smells of alcohol, which the pharmacist knows further increases risk of death—intended or unintended—from the combination of disturbed thought process along with certain medications and alcohol.

The Rite Aid Pharmacy uses the Patient Health Questionnaire 2 to screen clients for suicidal ideation and behavior. The screening is activated when a client has a sudden change in medications, has a prescription from another pharmacy, is filling a prescription for high-risk medications, or when a client’s behavior causes staff concern. The pharmacist asks Francoise, “Over the last 2 weeks, how often have you been bothered by either of the following problems?

Although appearing quite nervous and agitated, Francoise answers in the negative to each question.

What Should You Do?

The pharmacist is concerned that Francoise is denying or minimizing her feelings. Because of the combination of medications and behaviors, she is worried that Francoise is in acute danger. She decides to ask some more direct followup questions. She uses another screening tool, the Emergency Medicine Network’s EDSAFE Patient Safety Screener that she’s familiar with from working in a hospital-based pharmacy. She asks Francoise:

Francoise says she feels fine and hasn’t had any thoughts of harming herself. She says she did try to commit suicide in the past but refused to say when or how. She asks when she can get her prescriptions.

The pharmacist asks Francoise if she can contact a family member for additional information. She agrees. If Francoise had declined consent, HIPAA permits a clinician to make these contacts without the patient’s permission when the clinician believes the patient may be a danger to self or others.

Because the pharmacist has a “duty to protect” her client, she asks Francoise to wait with her in a private room and directs a cashier to call her family. Francoise’s husband arrives quickly and agrees to take his wife to the ED. The pharmacist follows up with the local emergency department and learns that Francoise has arrived at the hospital and is being evaluated.

Relapsing bipolar disorder places a person at increased risk for suicide. Because Francoise stopped taking lithium and succeeded in getting prescriptions for a supply of medications from a different pharmacy, she now had the means (and perhaps the motive) to self-harm. The pharmacist and her staff were able to help Francoise through a combination of engagement, screening, concern, and a nonjudgmental attitude. They kept Francois in a safe environment under one-to-one observation until someone arrived to take her to the hospital. The system set up by the pharmacy to flag high-risk medications along with a screening protocol provided help to a person in acute crisis.