Cannabis: The Debate Continues Page 7 of 12

5. Therapeutic Effects and Indications for Cannabis Use

Cannabis is not only remarkable in its wide margin of safety as a medication but also for the wide array of conditions, symptoms, or illnesses for which it is used. This may be a stumbling block for many clinicians, who find it hard to believe that a medication can be effective for so many indications. Although just in its infancy, the growing understanding of our ECS helps explain how and why cannabis is so versatile. As stated earlier, the ECS is involved in numerous physiologic processes that affect how we eat, sleep, relax, protect, and forget (Di Marzo, 1998).

Cannabis Matches Our Own Human Receptors

Cannabis is the only plant that contains cannabinoids similar to the endocannabinoids found in humans. Delta-9-THC is the primary psychoactive cannabinoid and the most studied, but researchers are finding therapeutic potential in some of the other plant-based cannabinoids as well.

The therapeutic properties of cannabinoids include anti-inflammatory, neuroprotective, analgesic, antispasmodic, anti-oxidant, antibiotic, anticonvulsive, antiviral, antifungal, bone stimulant, anxiolytic, antipsychotic, vasorelaxant, antidiabetic, antiproliferative, and anti-tumor. The following figure shows some of the actions of some of the non-psychoactive cannabinoids, to give you an idea of their therapeutic potential (Izzo et al., 2009).

Kogan and Mechoulam (2007) wrote that “the therapeutic value of cannabinoids is too great to ignore and identified numerous diseases that are being treated by or have the potential to be treated by the cannabinoids in cannabis: anorexia, emesis, pain, inflammation, multiple sclerosis, neurodegenerative disorders (Parkinson’s disease, Huntington’s disease, Tourette’s syndrome, Alzheimer’s disease), epilepsy, glaucoma, osteoporosis, schizophrenia, cardiovascular disorders, cancer, obesity, and metabolic syndrome-related disorders, to name just a few.” NIDA (2016) acknowledges a growing body of evidence that cannabinoids have therapeutic value in numerous health conditions including pain, nausea, epilepsy, obesity, wasting disease, addiction, autoimmune disorders, and other conditions. 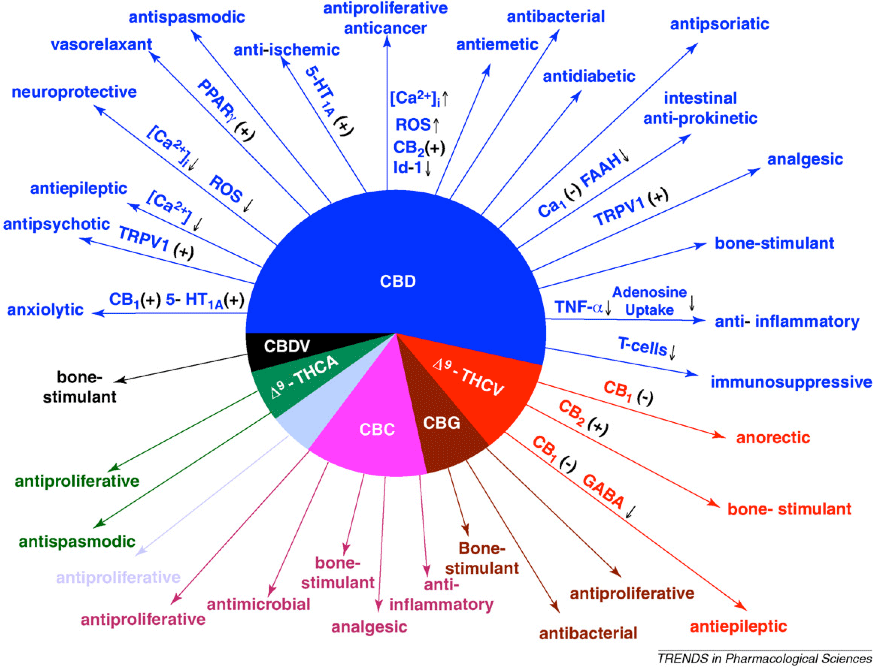 While the use of cannabis for chemotherapy-induced nausea and vomiting may be the best-known and accepted use of cannabis by healthcare professionals, pain management is the most common reason for use among the medical marijuana states that keep records (although New Jersey does not accept chronic pain as an acceptable use). Listed below are recent statistics from the Colorado, Oregon, Rhode Island, and New Mexico medical cannabis programs. Note that the state laws vary in the conditions allowed for cannabis recommendations. For example, Arizona does not allow physicians to recommend cannabis for post traumatic stress, yet Colorado and New Mexico do. Oregon passed a law in 2013 allowing PTSD as a qualifying condition.

As of May 2019 there were 87,879 registered medicinal cannabis patients in Colorado. The following table shows their medical conditions. For all patient groups age 11 and older, severe pain was the top reported condition.

As of November 2016, there were 25,697 registered medicinal cannabis patients in New Mexico. The following table shows their qualifying conditions.

As of April, 2019, there were 28,177 registered medicinal cannabis patients in Oregon. The following table shows their qualifying medical conditions. Medical marijuana patients in Oregon now have the option to apply or renew using a secure online system: ommpsystem.oregon.gov.

In 2019 we found dramatically different statistics about qualifying conditions than were found by the writer of the previous edition (2015). The table below shows 2019 data.

As of June 30, 2017 there were 18,050 cannabis patients registered in the state of Rhode Island. For the fiscal year July 1, 2016, to June 30, 2017, Rhode Island’s DOH approved and issued 6,313 registrations for patients, caregivers, and/or authorized purchasers. In the table below, which shows statistics from 2017, note that many patients have more than one diagnosis code; thus, the count of diagnosis codes used will always be higher than the number of patients.

As you can see, the indications for use of cannabis as medication are numerous and cover all specialty areas of practice. From a nursing perspective, cannabis can be effective for many common patient problems: nausea and vomiting, lack of appetite, inability to sleep, pain, depression, and anxiety. One way of categorizing the indications for cannabis is to use the descriptive properties of the ECS noted by DiMarzo:

Studies have clearly shown that THC and cannabis are effective anti-emetics. As an anti-emetic, cannabis may be used to combat the nausea and vomiting from chemotherapy (cancer, HIV/AIDS, hepatitis treatment), post operative nausea and vomiting related to anesthesia or intra-operative medications, motion sickness, morning sickness, and hyperemesis gravidarum. Cannabis is effective as an appetite stimulant for cancer patients or HIV/AIDS patients with cachexia or wasting syndrome (Abrams, 2002; Schnelle & Strasser, 2002; Plasse, 2002). There have been cases of hospitalized patients on tube feedings using cannabis to start eating again.

Cannabis helps induce sleep and, unlike many pharmaceuticals used as sleep aids, cannabis does not leave a person feeling drugged in the morning (Russo, et al., 2007).

As a muscle relaxant, cannabis helps decrease the muscle spasms experienced by chronic pain patients; it can ease the spasticity in patients with multiple sclerosis or spinal cord injuries, and it can ease menstrual cramps. Cannabis can relax blood vessels and prevent migraines. Although the mechanism of action is not completely understood with glaucoma patients, cannabis can reduce the intra-ocular pressure that leads to blindness. Cannabis can relax the bowels for persons suffering from irritable bowel syndrome or Crohn’s disease. Cannabinoids help induce bronchial dilation, which is helpful for asthmatic patients. It can relax the anxious person, help reduce stuttering, and help decreases obsessive behavior with OCD patients. Cannabis has also been helpful in eliminating or reducing the frequency of seizures (Mathre, 1997; Russo & Grotenhermen, 2002).

This covers a broad array of conditions because the cannabinoids have anti-inflammatory, neuroprotective, antibacterial, antifungal, antiviral, anti-tumor, and antiproliferative properties. Cannabis may be helpful after acute injuries such as traumatic brain injury (TBI), in part through its anti-inflammatory effects. One of the cannabinoids has been found to kill MRSA in the laboratory; clearly we need further study on this action (Appendino et al., 2008). Cannabis has been helpful with phantom limb pain and other neuropathic pain conditions. It is now believed that certain auto-immune diseases may be the result of an overactive immune system and cannabis can help put it back in balance. Research on the ECS indicates that cannabinoids may prevent Alzheimer’s disease. As a bone stimulator, cannabinoids can help hasten the healing process of bone fractures and prevent osteoarthritis (Mechoulam, 2010a).

Cancer patients have used cannabis to combat chemotherapy-induced nausea and vomiting and to help manage cancer pain. Animal research is showing that cannabinoids can kill cancer cells, and there are a growing number of case studies of cancer patients who have used concentrated cannabis oils or tinctures in treating their cancer. Research on the ECS shows that one of its functions is to identify cancer cells and induce apoptosis (cell suicide), prevent angiogenesis (the formation of blood vessels that feed a tumor), and prevent the spread of cancer to other areas (Holland, 2010). This leads researchers to explore the use of cannabis as a perfect cancer chemotherapy agent—one that can actually differentiate and destroy cancer cells rather than healthy cells. Studies have shown that cannabis/cannabinoids may be helpful in cancer treatment of glioma (aggressive brain cancer), lung, pancreatic, cervical, breast, colon, prostate, thyroid, and skin cancer, as well as leukemia and lymphomas (Pacher et al., 2006).

Many jokes have been made about short-term memory loss with persons who smoke cannabis recreationally. However, research on the endocannabinoid system shows that it is involved in the process of helping us forget painful experiences, such as traumatic experiences or the pain of childbirth. Many of our combat veterans, as well as rape and incest victims, have used cannabis to help them manage their post traumatic stress symptoms. Based on research findings, Israel and Czechoslovakia now allow the use of cannabis for their veterans who suffer from post traumatic stress (Mechoulam, 2010b).

Addressing the substance abuse issue: During the reefer-madness campaign, marijuana was portrayed not only as dangerous and addictive but also as a “gateway” drug. Prohibitionists claim that marijuana use will cause the user to try hard drugs such as cocaine or heroin. The IOM report noted that “it was not the substance itself but the illegal status of cannabis that served as a gateway to stronger drugs.” To purchase cannabis, a user had to interact with illicit drug dealers. If the drug dealer did not have cannabis, he would encourage the potential buyer to try whatever else was available (Joy et al., 1999).

Historically, cannabis pharmaceuticals were used to “combat habits of morphine and chloral hydrate” and to “manage delirium tremens from alcohol withdrawal.” Today, in many of the bigger compassion clubs and cannabis dispensaries, staff are noting that many patients report that cannabis has helped them get off of a drug of abuse. Philippe Lucas, of the Vancouver Island Compassion Society (VICS) in Canada, coined a new term to describe cannabis; he called it an exit drug (Lucas, 2004).

Rather than causing persons to use stronger drugs, patients are finding that cannabis helps them get off and stay off of drugs such as alcohol, nicotine, cocaine, methamphetamine, benzodiazepines, prescription opioids, and heroin. Some report that cannabis helped manage their withdrawal symptoms when they quit using their problem drug. Others found that if they used cannabis they could resist using their previous drug of choice and their lives became more manageable (Reiman, 2008).

How Medical Is Marijuana?

For a July 20, 2015 New York Times article by Aaron E. Carroll about the scant number of studies done on the medical use of cannabis, go to this link.

Severe chronic pain is commonly treated with opioids (eg, morphine, oxycodone, methadone). Unfortunately, opioids cause physical dependence with regular use and patients readily develop a tolerance to their analgesic effects, requiring increased dosage over time. Some of the opioids are in combination drugs (eg, Percoset, Vicodin) that also contain acetaminophen (Tylenol). Opioids carry the risk of overdose by respiratory depression, and acetaminophen carries a substantial risk of fatal liver damage with excess dosage. We currently have an epidemic of opioid overdoses.

Opioids present other problems as well. Many patients complain of feeling “drugged” and unable to think clearly when using opioids. Care has to be taken to avoid severe constipation as an expected side effect of opioids; some patients experience nausea and some suffer from depression (which may in part be due to the depressive effects of opioids as well as the result of living with chronic pain).

Many pain patients have found that they can significantly reduce or eliminate their use of opioids when they begin using cannabis. In addition, cannabis is not constipating, prevents nausea, and can act as an anti-depressant. Thus patients report effective pain relief and no longer require additional medications to counter the side effects of opioids (Mathre, 1997; Holland, 2010).  A 2014 study found a 24.8% lower mean annual opioid overdose death rate in states with medical cannabis laws (Bachhuber, et al., 2014).

A review and meta-analysis of the opioid sparing effects of cannabis by Nielsen and colleagues (2017) concluded that pre-clinical studies support the opioid-sparing effect of delta-9-THC, but that the findings from clinical trials are inconsistent, with some studies having important limitations. An opioid-sparing effect of cannabinoids in chronic pain patients was observed in one “very-low-quality clinical study.” Nielsen and colleagues found that the topic warrants exploration. “It remains to be seen if these promising pre-clinical and observational findings can be replicated in large, well-designed clinical studies” (Nielsen et al., 2017).