Cannabis: The Debate Continues Page 8 of 12

6. Dosage and Administration of Medical Cannabis

Given that the cultivation of cannabis currently remains a criminal offense under federal law, growers have focused their horticultural skills on developing stronger strains (higher THC content) with the intention of raising the price and increasing their profits. Unfortunately, these overzealous growers have developed some strains that are high in THC but almost devoid of CBD and other cannabinoids. Based on the therapeutic value of the non-psychoactive cannabinoids, these high-THC content plants are not as beneficial to patients. They are too psychoactive for novice patients, especially elders, and are not as effective therapeutically.

Project CBD was created to correct this situation by reaching out to growers of medicinal-grade cannabis and educating them about the need to develop strains rich in CBD and other cannabinoids. Project CBD also reaches out to educate patients and clinicians so that they will create a demand for CBD-rich cannabis (www.projectcbd.com).

The research on the various phytocannabinoids will eventually lead to pharmaceutical products targeted specifically to various illnesses or conditions. However, the whole natural plant may continue to be preferred by many patients. In the states that currently allow the medical use of cannabis, cannabis growers and dispensaries are keeping records on patient preferences for various conditions. They are finding trends that suggest certain strains, with their specific cannabinoid makeup, work best for particular indications.

A seed from a particular strain may develop into a plant with a different chemical profile when grown in a different region under different conditions. What this means is that much more research is needed to match specific strains with various indications. Once a strain is found effective for a particular ailment, clones can be taken from the mother plant to produce new plants with the same genetic makeup. In the meantime, this section will focus on general dosing guidelines for use of whole cannabis, and medical professionals should understand that individual patients will prefer some cannabis strains or hybrids over others.

Cannabis has a remarkably wide margin of safety; thus, there is virtually no risk of death by overdose. Clinicians who have experience in the use of cannabis have found that the dosage will vary greatly among patients, even when treating the same condition. The basic principal for dosing is to start low and go slow. Prior to the marijuana prohibition, many of the pharmaceutical tinctures were highly concentrated, and the dosage was in “minums.” The top of the container was a dropper to administer the medication. The label of an Ely Lily tincture of cannabis included dosage instructions that said: “DOSE 10–30 minums, increased till its effects are experienced.” 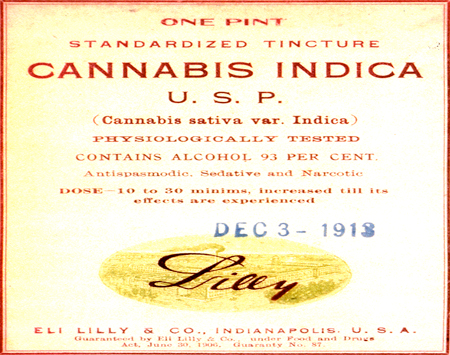 The label instructions read: “DOSE 10 to 30 minims, increased till its effects are experienced.” Source: Courtesy of Patients Out of Time. Used by permission.

Although the federal government—and more recently the American Society of Addiction Medication (ASAM)—continue to denigrate the medicinal use of cannabis by focusing on “smoked marijuana,” the truth is that cannabis can be formulated in a variety of preparations, and healthcare professionals need to separate the false propaganda from the facts.

The term medicinal-grade cannabis means that care has been taken in growing the plant in a clean environment without the use of dangerous pesticides or nonorganic fertilizers. Once the cannabis is ready for harvest it needs to be properly cured or dried to prevent mold (eg, aspergillus fungus). To keep the raw material from decomposing and losing its effectiveness it should be kept in a dry, air-tight container and out of sunlight. Freezing cannabis will also help maintain freshness. The stems and any seeds should be removed.

In the more sophisticated dispensaries, owners are responding to the patient need for quality control, and some are beginning to only use cannabis that has been tested for contaminants and cannabinoid content. Without clear regulations, this lack of quality control can be a serious problem for patients.

Many Americans think of smoking as the primary delivery method for cannabis; this limited view arose because of the marijuana prohibition that put an end to its medicinal use back in 1937, when pharmaceutical companies and physicians stopped making the medicinal formulations. In truth, cigarette forms of medicinal cannabis had been used earlier to treat asthma, since the effect of inhaling cannabis was to open the airway. Inhalation has the primary advantage of allowing a patient to titrate the dosage easily for maximum benefit because the onset of action is almost immediate. The medication is taken into the lungs and quickly absorbed through the capillaries into the bloodstream. The effects of inhaled cannabis will last approximately four hours.

Patients can smoke raw cannabis in several forms. The “joint” or cigarette form (hand-rolled or machine-rolled) is the most common among recreational users, but cannabis can be smoked using a pipe or bong (water pipe) as well. Smoking by joint is the least efficient because much of the medication goes up in smoke as the cigarette burns. Smoking small amounts using a pipe is more efficient, and the use of a bong can cool the smoke so that it is less irritating to the airway.

Rather than burning the plant material and creating smoke, cannabis can be heated to a temperature that will release the medication in vapors that can be inhaled, much like the nebulizer treatment common in hospitals. The original vaporizers were somewhat clumsy and the heat source was not well-regulated. Today there are numerous vaporizers on the market ranging in cost, size, shape, and effectiveness. There are home models and smaller portable models that patients can use when traveling. The better models have digital temperature controls that allow the patient precise control with heating, since the individual cannabinoids vaporize at different temperatures.

The sublingual (under the tongue) or oromucosal (in the oral cavity) delivery method of an oil or tincture provides another rapid onset of action as the medication is readily absorbed into the blood system. Tinctures are usually prepared in a base of alcohol, oil, or glycerol. Many concentrated tinctures are taken by dropper under the tongue, and within a few minutes the patient will feel the effects. Other tinctures may be in a spray container and sprayed in the mouth to be absorbed in the oral cavity and thence into the bloodstream. Many patients who never smoked cigarettes are more comfortable with this delivery method.

Taking cannabis by mouth in pill form or swallowed as a liquid has both benefits and drawbacks. Since the cannabinoids are fat-soluble, their absorption through the gut is slower and less predictable, being dependent upon the individual’s metabolism as well as the contents of the stomach. The onset of action may take as long as 30 minutes to an hour, making it more difficult to determine an effective dose, especially for the novice patient. In addition, when taken orally, the medication gets metabolized through the liver before getting into the bloodstream. The liver converts the THC to another chemical called 11-hydroxy-THC, which is more psychoactive than THC, and so the effects will be different than if inhaled or taken sublingually. The advantage of the oral route is that it will last much longer, so a patient does not have to medicate as frequently. This can be helpful for glaucoma patients who are trying to maintain a lower intraocular pressure.

In addition to pills, many dispensaries offer medibles, or edible cannabis products, as in tea, brownies, cookies, and even ice cream. An easy and versatile preparation is cannabis butter; since the cannabinoids are fat-soluble they mix well with butter and this can be used in cooking or put on toast or crackers. An advantage is that the butter can be made from the leaves that are often waste products for growers who only want the bud. The disadvantage is that patients can easily overdose on medibles, causing dizziness and/or couch lock, and extreme nausea and vomiting because the onset of action may not occur for 30 minutes or longer and the peak may not occur until 2 hours after ingestion. These symptoms will subside in a few hours, but patients need to be instructed on safe dosing.

Cannabis can be applied externally as a topical ointment, lotion, or poultice, and may be used in the treatment of skin inflammations, arthritis, or muscle pains. The goal is for the medication to be absorbed at the specific location being treated. Although it is unclear how well the cannabinoids are absorbed through the skin, the more soluble terpenoids and flavinoids also have anti-inflammatory properties that can be effective.

In Jamaica, physicians have developed cannabis-based eye drops for glaucoma patients. Canasol and Canalol (cannabis and Timolol) are available by prescription in Jamaica (West, 1997). In England, GW Pharmaceuticals has developed an oromucosal cannabis extract spray (Sativex) for use with multiple sclerosis, as well as neuropathic and cancer pain. It has taken years of research to get approval in the European countries, but Canada approved its use in 2005. Clinical trials using Sativex for severe pain in cancer patients have taken place in the United States, and the company is working to get FDA approval (www.gwpharm.com).

Single cannabinoid products are also on the market. We have already discussed Marinol as a capsule containing synthetic THC in sesame oil. It comes in 2.5, 5, and 10 mg capsules that resemble fish eggs. Originally approved for use as an anti-emetic and appetite stimulant, it can now be prescribed for off-label uses as well. It has been proven to be effective for some patients, but most find it less effective than whole cannabis. Nabilone is a synthetic cannabinoid similar to THC that is available in the United Kingdom, Australia, Canada, and some European nations. Other synthetic cannabinoids—Levonantradol made by Pfizer, Ajulemic acid (CT3) developed in Massachusetts, and HU-308 made in Israel—are emerging as new medications. Research has also been done to develop a dermal patch (Grotenhermen & Russo, 2002).

Rimonabant, or SR141716, is a cannabinoid antagonist that was developed for use as an appetite suppressant for treatment of obesity. The initial idea was that, since cannabis and the endocannabinoids are known to increase the appetite, blocking the cannabinoids could result in a decreased appetite and subsequent weight loss. However, once this medication was used by a larger population, reports of serious depression and potential suicide caused it to be withdrawn (http:// news.bbc.co.uk/2/hi/health/7687311.stm). As we learn more about the endogenous cannabinoid system, it makes sense that blocking the normal action of the endocannabinoids could lead to serious health problems.

A drug interaction should always be considered when taking more than one medication. A problem with patients using cannabis is that they may not report their use of it to their healthcare provider because of its illegality, and this prevents the healthcare provider from monitoring for possible interactions. Experts agree that more research in this area is needed.

Cannabis and THC have been shown to alter the absorption and elimination of other drugs. Because of possible additive or synergistic action, cannabis should not be used in combination with alcohol, sedatives, anti-anxiety drugs (benzodiazepines like valium, Xanax, or Klonapin), or sleeping pills; increased sedation is one potential outcome. CBD can slow the body’s metabolization of cholesterol medications (eg. Lipitor). For patients using theophylline, cannabis will increase the metabolic processing of that drug. Because cannabis seems to work synergistically with opioids, patients may be able to decrease or cease their use of an opioid because they find they no longer need it.