Most symptoms of COPD are due to obstruction or restriction to air flow in and out of the lungs, leading to difficulty in breathing. Dizziness, fatigue, shortness of breath, and even hypertension are all related to hypoxia, a lack of adequate oxygenation in body tissues. As in any condition, a thorough history is a necessity. It is said that as many as 9 out of 10 diagnoses can be determined by a good history. 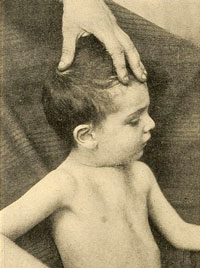 A history of difficulty breathing, shortness of breath after exercise, or exposure to environmental triggers can help identify the development of asthma. Clinical symptoms include wheezing, recurrent cough (worse at night and early morning), recurrent shortness of breath, and chest tightness with moderate activity.

Upon physical exam of those with childhood asthma and chronic respiratory illness, such as emphysema, the anterior thorax may appear pigeon-shaped or retracted. With a constant struggle to breathe, the accessory muscles (internal and external intercostals) and abdominal muscles are forced to engage and often pull the chest inward, resulting in pectus excavatum (pigeon chest).

The diagnosis of chronic bronchitis is made initially with the reported symptoms of a persistent productive cough for at least 2 consecutive months within 2 years. A history of cough, lack of energy, and chest irritation can begin the questioning of types and causes of cough. A clinical symptom is worsening cough with white or yellow sputum that has become more viscous. Rhonchi (rattling) in the chest, wheezing, rapid respirations, fatigue, headache, loss of appetitive, fever, myalgias, and arthralgias are commonly seen.

Symptoms for emphysema are similar to chronic bronchitis but with gradual exertional dyspnea and weight loss. Because of the difficulty breathing, caloric expenditure is increased, causing weight loss; in addition, there can be a lack of appetite that focuses on breathing rather than cooking, chewing, and eating. Flushed skin, barrel chest (increased anterior to posterior chest diameter), clubbed fingers, decreased libido, thin wasted appearance, and wheezing during exertion are classic. This is the classic “pink puffer.”

Diagnosis and Evaluation of COPD

As noted earlier, diagnosis begins by taking a thorough medical history, including exposures to environmental pollutants and resultant symptoms. Review of the subjective data in a history asks about onset, duration, course of symptoms, food patterns, smoking, and medications. A thorough history is helpful by asking the OLDCARTS* questions and including questions about smoking history, other diseases such as asthma, and alleviating and aggravating factors. For a physical exam, in additional to the standard vital signs, a focused assessment should be done on the lungs and breathing pattern, and adventitious sounds (Glass, 2014). An examination of sputum should observe for pink froth (seen in pulmonary edema) or presence of blood (possible TB).

*For those who favor mnemonics, the eight dimensions of a medical problem can be easily recalled using OLDCARTS (onset, location/radiation, duration, character, aggravating factors, reliving factors, timing and severity).

Conduct a general inspection that includes skin color, amount of respiratory effort, and an increase in anterior-posterior (AP) chest diameter. A 2:1 AP ratio is often seen in COPD. Advanced disease may show distended neck veins, whereas an early case of COPD may show very few clinical signs. The lungs should be assessed for absence of ventricular sounds found in COPD and increased vocal fremitus (vibration) and egophony (resonance) due to air trapping. Pallor, cyanosis, and decreased orientation may reveal hypoxia.

Spirometry is the gold standard for diagnosing COPD and pulmonary function tests; it easily performed in a clinical setting and should be done as a baseline for diagnosis and management of the disease. It should be done before and after a bronchodilator to determine improvement and diagnosis of FEV1. The ratio of FEV1 and FVC of less than 0.70 is diagnostically positive for COPD. ABGs, EKG, echocardiogram, TB test, and chest CT may reveal other causative factors.

The classic symptom of COPD is shortness of breath. At first, there may be little to no symptoms with COPD; however, because it is a chronic and progressive disease of deteriorating lung capacity and air flow, symptoms inevitably develop and worsen. Wheezing, shortness of breath, chest tightness, and cough are classic symptoms that also lead to weight loss, muscle loss, and difficulty with daily activities.

Here is a mnemonic to help you remember the symptoms of COPD:

Quality: From Mild to Severe

The quality of shortness of breath varies from mild to severe. Mild is seen in the initial stages of COPD and is common upon exertion, which limits activities of daily living; whereas, severe shortness of breath and symptoms cause the work of breathing to occupy all thoughts and energy.

Because asthma is classified in four ways,

the quality of cough and shortness of breath must be determined from mild to severe and quantified by how many days per week the patient is in distress breathing.

COPD can be triggered by exercise as well as allergies and pollutants. Determining the type of trigger is essential in asthma to teach prevention of acute exacerbations and better prophylaxis.

The use of a home peak-flow meter should be used to help identify the current condition of the lungs and airways. Acute exacerbations can be better understood by identifying whether the acute event was predictable—such as poor weather conditions, air quality, or exercise—or unpredictable. Here are symptoms to investigate further:

What are the classic clinical symptoms of asthma, chronic bronchitis, and emphysema?

Which of the following is not a symptom of COPD?

A medical history is essential for a patient newly diagnosed with COPD in order to establish a baseline of health status for all body systems, comorbidities, and threats to health.

The typical COPD patient is middle-aged or older. Men tend to have their first symptoms when they are older than 40 years. Patients with asthma, however, may present with symptoms early in life and respond to triggers such as dust, animals, pollens, seasonal allergies, and exercise.

Often a family history of smoking exists and, in the case of second-hand smoke, provides valuable information in diagnosing COPD. For the rare condition of a genetic mutation, a family history can help differentiate the types of COPD.

COPD is associated with smoking and exposure to environmental pollutants. The most likely contributing lifestyle choice is cigarette or cigar smoking. This is a controllable risk factor and should receive intensive attention both in treatment and in prevention of additional complications. 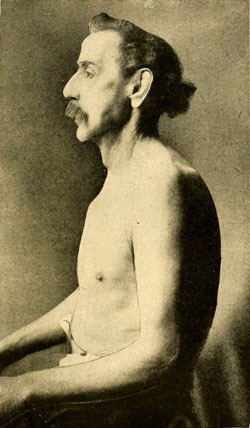 Note the expanded posterior of the man’s chest and the rounding of the dorsal cavity. Source: Wikimedia Commons.

A thorough head to toe examination should be completed, including vital signs to identify respiratory rate and pulse oximetry. Inspection should include hyperexpansion of the chest and thorax, and signs that accessory muscles may be used (retractions, nasal flaring), especially in children. Note the appearance of hunched-over shoulders or chest deformity. Inspection of the skin may also identify concomitant eczema, dermatitis, or other irritations that may signal an allergy. Observation may reveal clubbed fingers, due to hypoxia of the finger tissues. Auscultation of lung sounds is a focused assessment and should note wheezing during normal expiration or prolongation of expiration as seen in asthma (Glass, 2014).

Physical diameter of the chest, where the anterior to posterior ratio is >2:1, may be an indication for COPD. Men with COPD often develop a barrel chest appearance from the gradual expansion of stiff lungs that don’t exhale properly; this traps air and forces the musculature to widen.

Based on the Global Initiative for Chronic Obstructive Lung Disease (2014), the majority of patients with COPD have moderate to severe disease due to late or incorrect diagnosis, which increases overall medical costs and the number of exacerbations experienced by the patient.

Organizations specializing in respiratory care strongly suggest that the use of spirometry for both diagnosis and management be standardized. Since 1947, the ratio of vital capacity (FVC) to forced expiratory capacity in 1 second (FEV1) had been the scientific parameter physicians used to measure lung health (Brusasco & Pellegrino, 2016); but the GOLD standard established in 2001 identified the FEV1/FVC <0.70 as a “rule of thumb” to define air flow obstruction.

Some authorities, however, have proposed other ranges—from <0.75% by the American Thoracic Society in 1986 to <0.75–0.80% by the Global Initiative for Asthma in 2015 (GINA, 2015). These differences are due to variations among ethnic groups studied. The differential diagnoses included COPD, asthma, heart failure, bronchiectasis, pulmonary edema, pneumonia, or cancer.

Completing a spirometry test correctly is essential for a valid diagnosis of COPD. Although there are variations with machines, the basic concept is to have the patient breathe in deeply and then forcefully exhale for 1 full minute. The measurements are collected after three separate attempts, which measure the forced expiratory effort (FEV1) at 1 minute. Remember to identify gender, ethnicity, and height on the machine because each of these impact total lung capacity and the result is calculated based on these factors in addition to performance. Less than 70% of FEV1 may indicate COPD. Interpretation of test results is important to distinguish among all types of COPD. 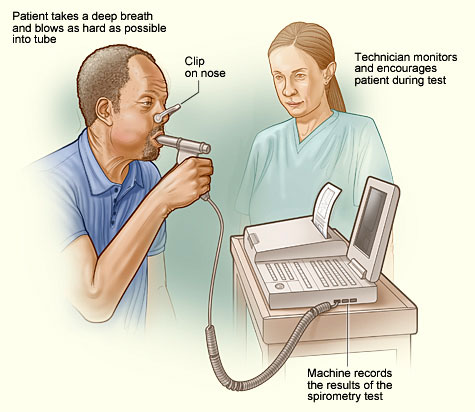 Because treatment for COPD is contingent upon spirometry results, Mark’s spirometry test needed to be completed to determine the stage of damage to his lungs. The FEV1/FVC ratio for Mark came back 60%, which is below the 70% predicted value and diagnostic for Stage II COPD. A chest x-ray was also ordered to rule out any other diagnosis being considered. It came back negative. ABGs, an EKG, and an echocardiogram could have been completed but were not at this time.

Currently, COPD is classified based on severity. Most recommendations include a consideration of both the spirometry results of the FEV1 and the patient’s symptoms to determine the class and severity of COPD. Spirometry confirms the diagnosis and the pulmonary function test classifies the severity.

According to the GOLD standards, which are reviewed annually, the current classes are as follows in the table below.

Mark was scheduled for a two-week followup pending the results of his spirometry examination. When he returned to the clinic, his physician showed him the spirometry results and explained that he had COPD. She reviewed his treatment plan and gave him a pamphlet and educational materials. 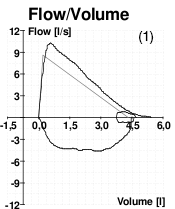 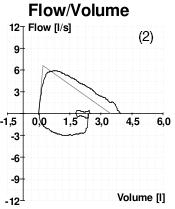 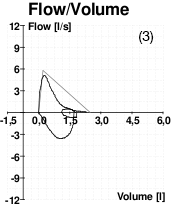 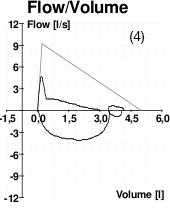 A full range of imaging techniques is employed in diagnosis of COPD. 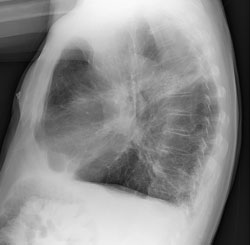 Lateral view of an 81-year-old man with COPD and the resultant enlarged lungs that appear cloudy instead of clear, the barrel chest resulting from the dorsal cavity becoming rounded from hyperinflation of the lungs. Source: Wikimedia Commons.

In diagnosing COPD, a chest x-ray, which shows lung size and clarity and heart size, is a priority when considering the possibility of accompanying heart failure. Remembering that the heart and lungs work synergistically, and any chronic complication of the lungs can affect the heart.

Computed tomography (CT) uses x-rays to produce a series of images of each part of the thoracic cavity, including the lungs and heart. A full thoracic CT can provide valuable information about the size of the lungs and the heart if the need to assess for lung cancer or congestive heart failure is part of the patient scenario and diagnosis.

A thoracic MRI also allows a full look at the anatomy of the lungs, including the heart, in ruling out other pathologies such as lung cancer or congestive heart failure that may be complications of COPD.

Because there is no cure for COPD the prognosis is inevitably death. There is huge variation in morbidity due to variations on the other factors such as age, smoking history and current smoking status, comorbidities, compliance with medications, nutrition, and exercise tolerance.

What are the characteristics of a chest x-ray on someone who has COPD?