We will begin and end this course with a simple message:

Never, ever shake a baby!

Shaken baby syndrome (SBS) is a type of abusive head trauma (AHT) inflicted upon children. It results from violently shaking an infant by the shoulders, arms, or legs. Head trauma can occur either from shaking alone or from impact with or without shaking. Damage can occur from as little as 5 seconds of shaking. It is a non-accidental, inflicted, preventable form of child maltreatment.

We will be talking about abusive head trauma, which the general public usually knows as shaken baby syndrome. By either name, we’re describing injuries resulting from a kind of child abuse. Shaken baby syndrome may result when someone shakes an infant out of frustration, perhaps to get him or her to stop crying, or when the infant is thrown, struck, or slammed against a hard surface. Of course, this does not include gentle bouncing or other playful activity that is actually important to healthy child development. Even though the caregiver often does not intend to harm the baby, shaken baby syndrome is a serious form of abuse.

. . . an injury to the skull or intracranial contents of an infant or young child less than 5 years of age due to inflicted blunt impact and/or violent shaking. This case definition specifically excludes unintentional injuries resulting from neglectful supervision and gunshot wounds, stab wounds, and penetrating trauma.

There are many other terms used in the medical, legal, and law enforcement communities to describe traumatic brain injuries in infants, among them shaken infant syndrome, shaking impact syndrome, non-accidental injury, non-accidental trauma, non-accidental head injury, and shaken baby syndrome/abusive head trauma (SBS/AHT) (Parks et al., 2012). This course will use a variety of terms throughout.

Exactly how many instances of shaken baby syndrome occur each year is difficult to determine because of differing definitions, cases not reported, and contradictory reporting and coding procedures. We do know that, in the United States, abuse is the third leading cause of all head injuries in children after falls and motor vehicle crashes. In the first year of life, when infants are particularly vulnerable, the majority of serious head injuries are caused by physical abuse (Parks et al., 2012).

Many young children and infants who are shaken never fully recover. Nearly two-thirds of child victims of abusive head trauma suffer serious health consequences, significant disability, and other long-term consequences (Parks et al., 2012). While we have learned a lot about why child abuse happens, attempts to prevent it are relatively new.

It is really tragic when we see children who are victims of abusive head trauma or shaken baby syndrome come in to our pediatric intensive care units and hospitals around the country because we look at infants who, for the most part, have been healthy babies, who have their whole life ahead of them, and because of social circumstances and frustrations by the adults caring for them, often end up with permanent brain injuries that affect the remainder of their lives.

Comparative Head Sizes over the Lifespan 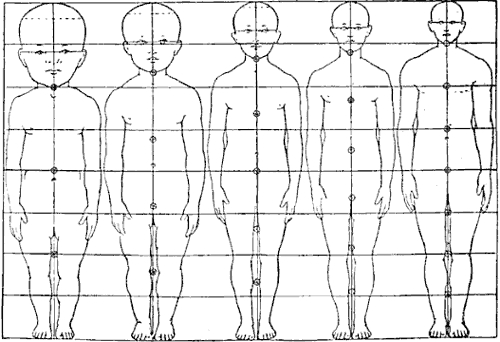 Human body proportion changes with age. An infant (on the left) has a larger head than older children and adults in proportion to its body. Courtesy of Wikimedia Commons.

Because of its large head and weak neck muscles, a shaken infant or toddler can sustain a type of whiplash similar to that from an automobile accident. Shaking may bruise the infant’s brain or even tear the large blood vessels along the outer layer of the brain, causing it to bleed, swell, and press against the inside of the skull. If the pressure is not relieved, additional injury may ensue. Babies who are shaken violently can die from this kind of incident (NICHD, 2013).

A blow to an infant’s head may result in fracture to the skull as well as brain bleeding and swelling. Like severe shaking, such impact to the head often leads to permanent brain damage or death (NICHD, 2013).