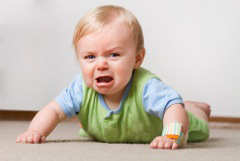 For children under 1 year of age, the incidence of SBS/AHT varies, ranging from 20 to 30 cases per 100,000 children (Parks et al., 2012). A study of pediatric abusive head trauma cases in North Carolina suggested that as many as 3 to 4 American children each day experience severe or fatal head injuries as a result of child abuse (CDC, 2012).

The peak incidence and rapid decrease of SBS/AHT after this age are thought to be related to a decrease in the episodes of prolonged, inconsolable, and unpredictable crying (Parks et al., 2012). Nevertheless, AHT injuries have been reported in children up to age 5 (CDC, 2012).

Scope of Child Maltreatment in Kentucky

Kentucky has one of the highest rates of child maltreatment in the country (Children’s Bureau, 2011). In 2012 among the more than 1 million children living in Kentucky there were nearly 35,000 abuse or neglect reports that met the criteria for investigation. Nearly 10,000 of those reports—involving more than 15,000 children—were substantiated by investigators. Within this group, 22 fatalities and 33 near-fatalities were substantiated as related to abuse or neglect (Dept of Community Based Services, 2012).

In an attempt to uncover child abuse trends and risk factors in Kentucky, the Department of Community Based Services (DCBS) examined 214 cases of child abuse and neglect that resulted in death or serious injury between 2008 and 2012. In the DCBS review, the 214 children whose death or serious injury was the result of abuse or neglect, 57% were boys and 43% were girls (DCBS, 2012). Caucasian children accounted for 79% of the fatalities or near-fatalities and African American children accounted for 12% (DCBS, 2012). Head injury was by far the most common type of physical abuse, accounting for nearly half of the deaths and serious injuries (DCBS, 2012).

In Kentucky 91% of all cases of fatal or near fatal physical abuse were under the age of 4 (DCBS, 2012). The age of the child is consistently seen by caseworkers and policymakers as a predictive factor in cases of death or serious injury.

It is difficult to ascertain the exact number of shaken baby cases because many are under-reported or never receive a diagnosis. The International Classification of Diseases (ICD) is used to code and classify mortality data from death certificates (see box below). Tracking AHT is challenging because the ICD-10 maltreatment syndrome codes (T74 or Y07) and the ICD-9-CM shaken baby syndrome code (995.55) are under-utilized by professionals who use the ICD coding system (Parks et al., 2012). This may result from a lack of information about the specific circumstances of the injury at the time the death certificate was completed or from a reluctance of physicians to diagnose and code for shaken baby syndrome.

ICD-10 abuse/maltreatment codes are not specific enough to capture the circumstances surrounding child assault, abuse, and maltreatment and to specify the types of perpetrators. Cause-of-death data, especially pertaining to assignment of abuse/maltreatment codes, could be improved if law enforcement records and state and local child death review systems was made available to the medical examiner or coroner before they certified the causes of death on the death certificate (Parks et al., 2012).

Classification of Diseases, Functioning, and Disability

The International Classification of Diseases (ICD) is used to code and classify mortality data from death certificates. It is designed to promote international comparability in the collection, processing, classification, and presentation of mortality statistics.

This lack of consistency also creates challenges in identifying those groups at highest risk who might benefit from focused intervention or increased services. It hampers efforts to monitor changes in the incidence and prevalence of abusive head trauma over time. In turn, this impedes the ability to monitor the effectiveness of abusive head trauma prevention and intervention activities (Parks et al., 2012).

Adverse childhood experiences including verbal, physical, or sexual abuse as well as family dysfunction, have been linked to a range of negative health outcomes in adulthood. Among them are substance abuse, depression, cardiovascular disease, diabetes, cancer, and premature mortality (MMWR, 2010).

The ACE Study findings suggest that certain adverse experiences are major risk factors for the leading causes of illness and death as well as poor quality of life. Progress in preventing and recovering from health and social problems is likely to benefit from understanding that many of these problems arise as a consequence of adverse childhood experiences.